In coordination with the American Motorcyclist Association (AMA), KRAVE Group LLC announced that it has entered into an agreement to take over promotional and management rights for AMA Road Racing properties in North America as part of the newly formed MotoAmerica series. The move comes at a pivotal time in professional road racing, and will allow MotoAmerica to award AMA and FIM (Fédération Internationale de Motocyclisme) North America No. 1 plates to class champions beginning in 2015. Races and venues will be announced at a later date. 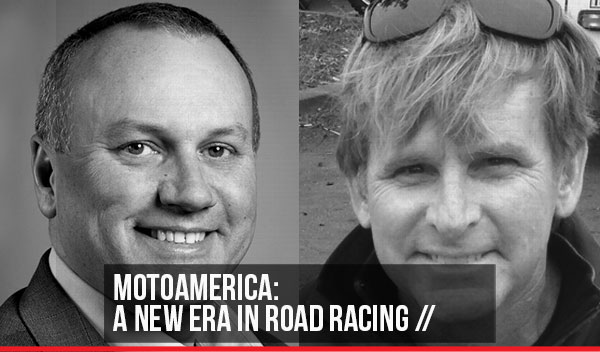 “When I was a kid first learning how to race, my ultimate goal – the goal of every young racer – was to compete in the AMA,” said KRAVE Group LLC Partner and MotoAmerica president Wayne Rainey, a two-time AMA Champion (1983 and 1987) and three-time 500cc World Champion (1990, 1991 and 1992). Rainey, who notched 24 Grand Prix race wins during his storied career, was inducted into the AMA Motorcycle Hall of Fame in 1999 and is also in the International Motorsports Hall of Fame, the MotoGP Hall of Fame and the Motorsports Hall of Fame of America.

“The United States has produced some of the fastest riders in the world,” Rainey continued. “To bring that status and excitement back to the U.S. we need to start fresh – and that is our ultimate goal. MotoAmerica is going to bring one of the most exciting sports on earth back to the forefront; to recruit the next generation of young riders while supporting and highlighting today’s established stars.”

Another partner in KRAVE Group LLC is Terry Karges, a former motorsports marketing executive and team owner who spent 17 years at Roush Performance before being named Executive Director of The Petersen Automotive Museum. Richard Varner is the fourth partner in KRAVE (Karges, Rainey, Aksland, Varner). Founder of Champions Moto motorcycles, Varner is also an energy sector entrepreneur and businessman.

“If you are an amateur or professional motorcycle road racer in America, if you are a fan of road racing or if you are a company that does business in this industry, this is an exciting day,” said AMA President and CEO Rob Dingman. “Our goal has always been to entrust the promotional and commercial rights for professional racing to a talented, dedicated, well-capitalized professional entity, and MotoAmerica certainly offers all that and more.”

The agreement between the AMA and KRAVE Group LLC (MotoAmerica) was finalized on September 3. More information will be released shortly, including future race dates, classes, rules and event information. For more and continued updates, please visit MotoAmerica.com.