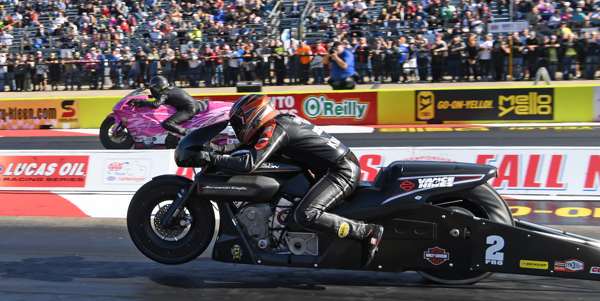 “This was a perfect weekend for our championship run,” said Krawiec, a three-time Pro Stock Motorcycle champion who last won the title in 2012. “My closest competitor lost in the first round, so for me every win after the first was a bonus, and to race the Street Rod all the way to a win in the final is huge. I like our position with a commanding points lead and two races left on the schedule. Now the pressure is on anyone trying to catch us.”

Krawiec led all qualifiers for the event with a best elapsed time (ET) of 6.860 seconds at 196.53 mph. Harley-Davidson Screamin’ Eagle/Vance & Hines rider Andrew Hines qualified third on the team’s other Harley-Davidson Street Rod competition motorcycle with a 6.878 ET at 195.87 mph.

In Sunday eliminations Hines won in the first round but lost in round two. Krawiec charged through the field to advance to his seventh final round of the season. Krawiec got the 42nd win of his career when his opponent fouled at the starting line. With a 6.785-second blast in round two Krawiec posted the quickest Pro Stock Motorcycle ET of the day and the fastest top speed at 196.50 mph.

After four of six rounds in the 2017 NHRA Mello Yello Countdown to the Championship playoffs, Krawiec leads the Pro Stock Motorcycle standings with 2,506 points. Hines is in third place with 2,364 points.