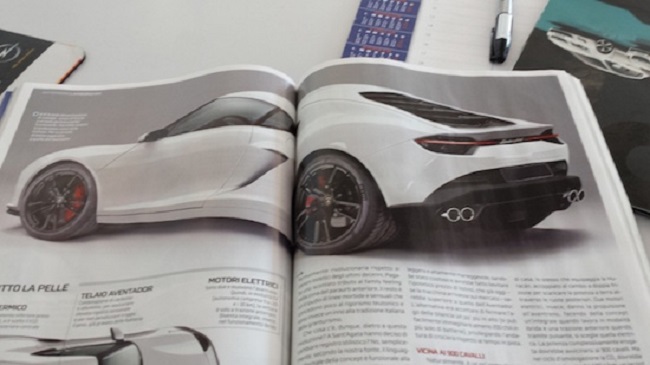 With Lamborghini promising to debut a new model at the Paris Motor Show next week, everyone has been wondering what exactly it will entail. They gave us the teaser image shown below, which led people to speculate that the car would be a 2+2 grand tourer. However, given that the picture only contained a rough outline, we didn’t really have much to go on. But that changed recently, as a picture of the car was just leaked in an Italian magazine. The leak came by way of autoblog.nl, who posted the pictures and also posited alleged details of the car’s power-plant. You can clearly see how the new car fits the lines of the teaser image, which has led most to deduce that this is most certainly the car to be debuted at Paris, which has been almost unanimously referred to as the Asterion.

Of course, even though everyone is calling this car the Asterion, don’t be shocked if it isn’t actually named that come next week. The speculation regarding the aforementioned name merely stems from the fact someone noticed Lamborghini trademarking the name and various other things useful to marketing a model with that name. It may be Lamborghini is merely saving that name for a future model. However, it does seem likely that the new model will be called Asterion. Lamborghini recently trademarked the following logo, which, by virtue of the lightning bolt, implies that a car made under the Asterion nameplate will indeed be a hybrid.

Autoblog.nl reports that the car may have Lamborghini’s standard V10 and use three electric motors to augment the engine, delivering in excess of 900 horsepower. This would allow the new Lambo to compete with some of the most high performing hybrid supercars of today, including the Porsche 918, the Ferrari LaFerrari, and the McLaren P1. However, these claims by autoblog.nl are entirely unsubstantiated, as they have not released their source for this information. It should thus be noted that the power-plant is still entirely up in the air.

It would make sense that a hybrid grand tourer would use a smaller power-plant. As one of the larger cars in the Lamborghini line, it probably wouldn’t be as high performing as some of the other coupes and roadsters. Also, with a hybrid power-train to augment, the engine wouldn’t need to be as big and powerful. This opens the door for a divergence from the time tested V10 that has become a mainstay of the Lamboghini line. A V8 or, less likely, a V6 could be on the table. Maybe Lamborghini will use the Paris Auto Show as an opportunity to unveil not only a new model but also a new engine or, if nothing else, a semi-new engine that is a reworked variant of something belonging to its parent, VW.