The new Lamborghini Aventador S is characterized by new aerodynamic design, redeveloped suspension, increased power and new driving dynamics. The ‘S’ is the suffix of previous enhanced Lamborghini models and defines a new benchmark for the V12 Lamborghini.

“This is the next generation Aventador as well as the expression of new technological and performance milestones in super sports car development,” says Automobili Lamborghini Chairman and CEO Stefano Domenicali. “The Aventador S is visionary design, cutting-edge technology and driving dynamics in pure harmony, and elevates the concept of super sports cars to a new level.”

The design of the new Aventador S clearly indicates the new Aventador generation. The Aventador S features a number of exterior developments, particularly in front and rear, while its profile remains clearly an Aventador. Every modified component is redesigned for a purpose, achieving maximum aerodynamic efficiency while accenting the Aventador’s complex, muscular dynamism. Furthermore, Lamborghini Centro Stile has intelligently integrated certain elements of past icons, such as the lines of rear wheel arches reminiscent of the original Countach.

A more aggressive nose and longer front splitter redirect airflow for better aerodynamic efficiency, improved engine cooling and increased cooling to the radiators.  Two air ducts in the side of the front bumper reduce aerodynamic interference from the front tires and optimize wake flow to the rear radiator. 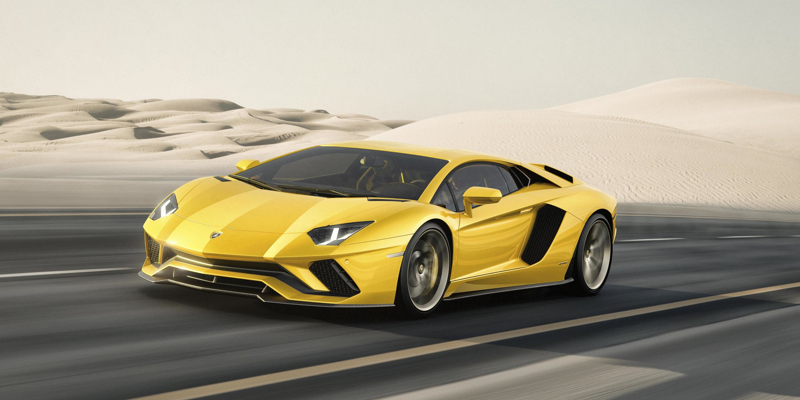 The rear of the Aventador S is dominated by a black diffuser, available on request in carbon fiber, characterized by a number of vertical fins that amplify the airflow effects, reduce drag through pressure recovery and generate downforce. Three single exhaust outlets exit through the rear bumper.

The active rear wing is movable in three positions depending on speed and drive select mode, and optimizes the car’s improved overall balance, working with vortex generators created in the front and rear of the chassis’ underside that maximize air flow as well as assist in brake cooling.

The Aventador S is redeveloped around a ‘total control concept’ to provide a superior drive, ride and performance; every aspect of the car’s suspension and electronic control systems has been advanced, with the goal of particularly enhanced control and driving emotion.

Enhanced lateral control comes from new four-wheel steering, adopted for the first time on a series production Lamborghini. The system provides improved agility at low and medium speeds and more stability at high speed. On the front axle it is combined with Lamborghini Dynamic Steering (LDS), tuned for a more natural and responsive feel with a sharper turn-in. It is specially adapted to integrate with the active Lamborghini Rear-wheel Steering (LRS) on the rear axle: two separate actuators react in five milliseconds to driver’s steering movements, allowing a real-time angle and cornering stiffness adjustment.

At low speeds, front wheels face in opposite direction to the steering angle, thereby virtually reducing the wheelbase. With less steering wheel angle required, the Aventador S is more agile with a reduced turning radius, ensuring higher performance in curves and making it easy to maneuver in town and at low speeds.

Conversely at higher speeds both front and rear wheels share the same steering angle, thus virtually extending the wheelbase, providing increased stability and optimizing the responsiveness of the car. 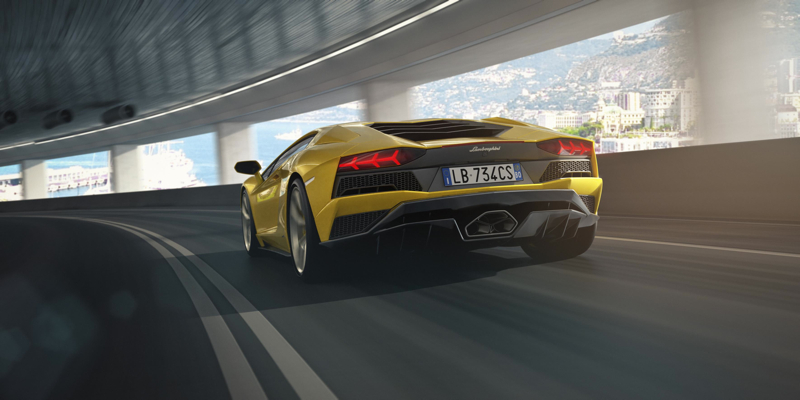 Longitudinal control is achieved via an improved ESC strategy with faster and more precise control of traction control and vehicle dynamics, depending on the driving mode selected. Extensively tested on surfaces such as snow and ice, the Aventador S has improved adhesion detection to maximize grip in all conditions and enhance its handling capabilities. The Aventador S permanent four-wheel drive has been calibrated for the stabilizing effect of the new Lamborghini Rear-wheel Steering, allowing more torque to the rear axle: when powering off the throttle, less torque is shifted to the front axle to allow over-steer behavior and a sporty, but safe drive.

Lamborghini engineers have integrated the smart Lamborghini Dinamica Veicolo Attiva (LDVA) control unit to manage these systems in the car. LDVA is the new brain of the car, which receives real time and precise information on body motion via input from all sensors of the car. It instantly defines the best set-up of all active systems in order to guarantee the best vehicle dynamics in each and every condition.

The Lamborghini Aventador’s naturally aspirated 12-cylinder, 6.5 liter engine outputs an additional 40 hp over its predecessor, to a maximum 740 hp, with a 690 Nm of torque at 5,500 rpm. To achieve the power increase, both VVT (Variable Valve Timing) and VIS (Variable Intake System) have been optimized in order to obtain an enriched torque curve. Additionally, the maximum engine revs have been increased from 8,350 to 8,500 rpm.

The Aventador S adopts a new exhaust system developed as the result of a significant R&D project. More than 20% lighter than its predecessor and the product of testing multiple configurations, the results are an enhanced Lamborghini sound and resonance from the already inimitable V12 aspirated engine, with the three single pipe outlets at the rear of the Aventador S a visual reminder of the new exhaust system.

As in its predecessor, the Aventador S is equipped with a stop-and-start system and cylinder deactivation for optimized engine efficiency. When full engine capacity is not required, six of the twelve cylinders are temporarily deactivated by switching off one cylinder bank. When the driver accelerates, the system switches back instantaneously to twelve-cylinder mode, with the changeover virtually impossible to detect by the driver.

The cockpit of the Aventador S brings new functionality and refinement. A new TFT digital dashboard can be customized according to the driver’s preferences, with different kombi screens for STRADA, SPORT and CORSA in conjunction with the EGO mode. Selected from the driving modes options on the control panel, the EGO button reveals further options on pop-up digital screens, allowing the driver to choose his preferred settings. 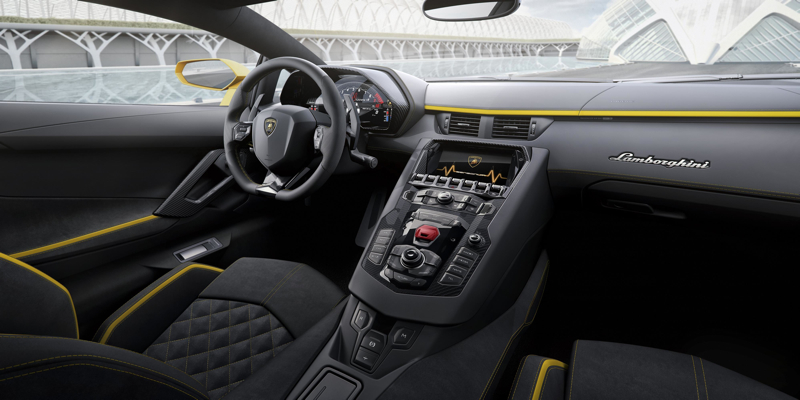 The interior specification of the Aventador S is virtually limitless through Lamborghini’s Ad Personam customization program.

Price of the Lamborghini Aventador S and market delivery

The first customers will take delivery of the new Lamborghini Aventador S in Spring 2017 at suggested retail prices as follows: