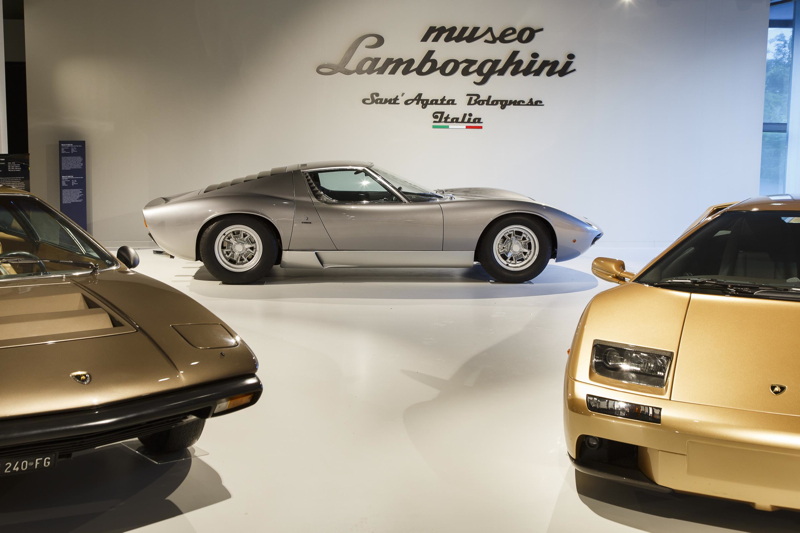 Stefano Domenicali, CEO of Automobili Lamborghini, has inaugurated the new Lamborghini Museum at the company’s headquarters in Sant’Agata Bolognese near Bologna. The museum’s layout and displays have been completely renovated, providing a new visitor experience including multimedia displays and activities. The inauguration was held to coincide with the first stage of the Miura Tour, the owners’ rally celebrating the iconic super sports car’s 50th anniversary, with a journey of over 500 km through the Italian regions of Emilia, Liguria and Tuscany. The participants’ 20 Miuras, put on display at the heart of the company, were saluted by a flyby of four Eurofighters from the 36th Stormo Caccia (fighter squadron) of the Gioia del Colle airbase near Bari in southern Italy. The new Chief of Staff of the Italian Air Force, Lt. Gen. Enzo Vecciarelli, was present.

Stefano Domenicali remarked: “The inauguration of the new Museum on the same day as the Miura Tour sets off, sends out a clear signal on Lamborghini’s commitment to honoring its history. The Museum, which has been designed as an authentic experience for visitors, will be a key attraction for an ever-increasing number of arrivals from around the world. The new layout now provides a richer experience of the world of Lamborghini where our history, engines, design and technology come together in a journey from the brand’s past to its future.”

The Lamborghini Museum, opened in 2001, has been completely renovated to create an authentic experience, which takes visitors on a journey from the past to the future of Lamborghini. The new concept makes an immediate impact on visitors, featuring white floors and gray tones on the walls to bring out the colors of the vehicles and other displays, inspired by the brightest colors in Lamborghini’s history. Carried out in record time and with minimal disruption to the many visitors, the new design and layout was implemented with the support of specialized company ETT Solutions and managed by Antonio Ghini, a well-known expert in the sector.

The museum experience is divided into chapters: on entering, visitors are greeted by the sound of an Aventador and a Huracán roaring by in a typically Emilian setting, immediately immersing them in the unmistakable sound of Lamborghinis in action. They go on to meet the first vehicle created in Sant’Agata, the 1963 350 GT, and then to the legendary Miura. A display of its rolling chassis shows the vehicle’s structural qualities, alongside the only roadster example. The Museum’s area dedicated to technology includes the most famous engines as well as a history of the brand’s evolution through models that introduced some important technological innovations: the Diablo with four-wheel drive, the P 140 with its aluminum chassis, the Sesto Elemento and its carbon fiber body, and the Asterion with its hybrid design. 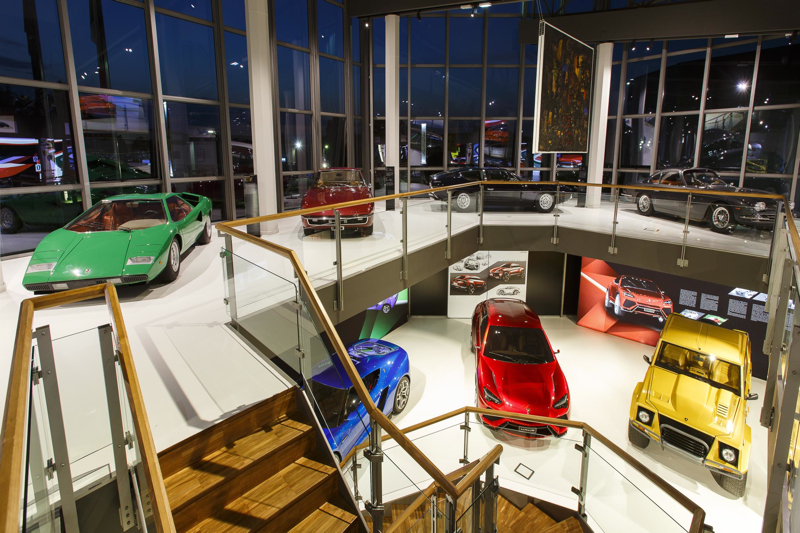 Still on the ground floor, visitors now take a leap into the future: displayed side by side are the Urus, the Lamborghini SUV concept in development for a 2018 debut, and the LM 002, the forerunner of all SUVs. The Lamborghini Cheetah, the first prototype of the future LM 002, was created in 1977 when the term SUV had not even been invented.

A ‘family tree’ of all Lamborghini models created over more than 50 years of history, is displayed as a large piece of wall art. Featuring striking graphics, the history of the brand is reconstructed through the models it has produced.  Four monitors allow visitors an insight into Lamborghini cars one at a time, including their technical and construction characteristics.

On the upper floor there are two main themed areas: in one, all the main Lamborghini models are on display, starting with the current Aventador and going back to the front-engined classics such as the 400 GT, while the other area is dedicated to motorsport, with the design and colors reproducing the world of motor racing. 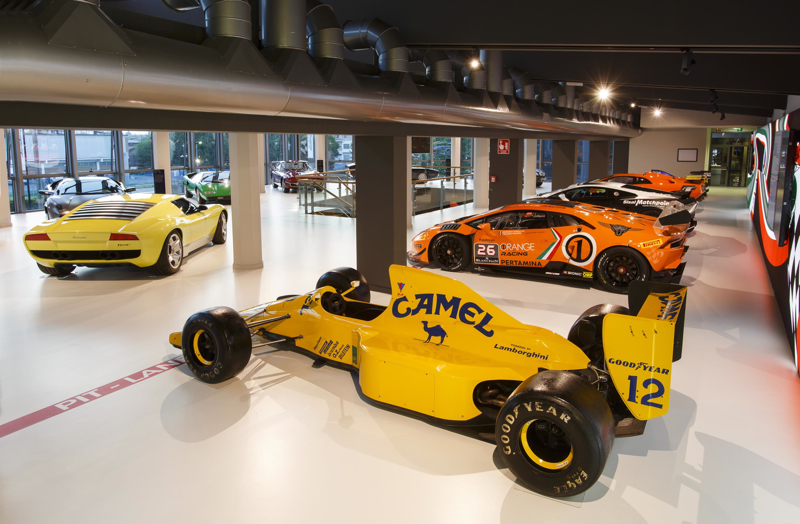 Displayed in racetrack-style garages are the Super Trofeo racing versions of the Diablo GTR, Gallardo and Huracán, as well as two of the Formula 1 cars to feature the Lamborghini V12 engine: the Lotus L102 and the Lamborghini from the 1990 and 1991 seasons. The racing experience is enhanced by the presence of numerous multimedia features, such as monitors for accessing the Squadra Corse website; two virtual reality systems which let visitors experience the thrills of a lap in a Lamborghini Super Trofeo while sitting in a Huracán seat; and a video wall which shows the reality of Super Trofeo with films of recent races. There is also an interactive showcase with two Huracán models on display from the international GT and Super Trofeo championships, along with their steering wheels to allow enthusiasts to get a feel for the functions made available to the race drivers. Concluding this section is a podium which visitors can climb onto for a photo. For maximum realism, they can even choose their own national flag which will appear on a screen above them.

The central part of the first floor is dedicated to the Miura and its 50 years of history; for this important anniversary the only example of the roadster model has been put on display, alongside the rolling chassis which demonstrates the car’s refinement and technological innovation as dreamed up in 1965, by the designers of the Miura: Gian Paolo Dallara and Paolo Stanzani. 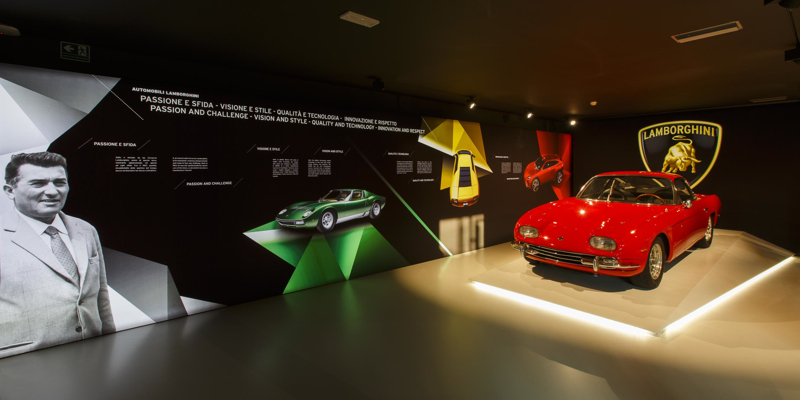 The visit concludes with an exhibition showing how the Lamborghini Centro Stile in Sant’Agata Bolognese operates, a secret place where the design team is already working on the future. This future, and the models it will bring with it, will further enrich the experience offered by the Lamborghini Museum, at the heart of the factory itself.

The Lamborghini Museum, which is open to visitors from 10 a.m. to 5 p.m., Monday to Saturday, also gives visitors the opportunity to see current model assembly lines (booking required). This is a unique way for Lamborghini enthusiasts to gain a complete understanding of the legendary brand’s history, which today continues on the path of Ferruccio Lamborghini’s original visionary ideas. 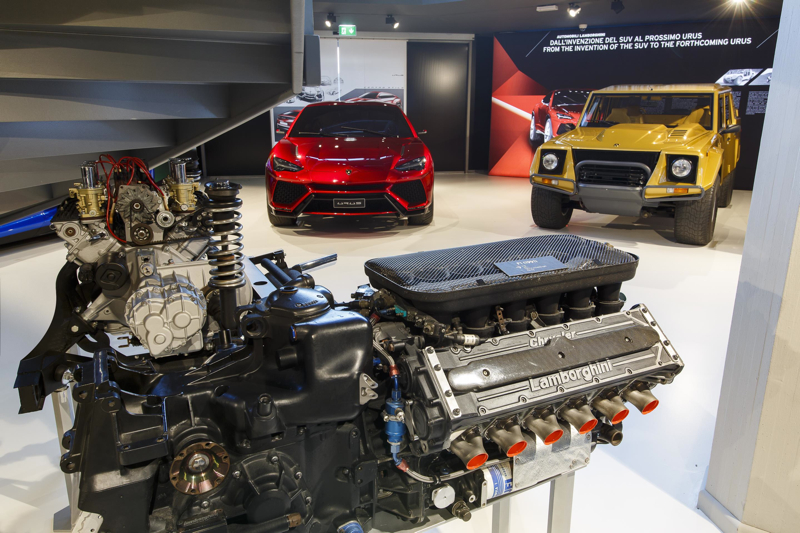 The Miura Tour from June 8 to 12, celebrates the 50th anniversary of the most important icon in Lamborghini’s history, the Miura. Twenty of the best surviving examples of Lamborghini Miura models, built between 1966 and 1972, will participate in the tour of more than 500 km. The City of Bologna welcomed the arrival of the cars, coming from Japan, the USA and other European countries, on June 8, where they were put on display in the prestigious setting of Piazza Minghetti. On the morning of June 9 the procession set off towards the company’s headquarters in nearby Sant’Agata Bolognese, where the owners visited the plant and witnessed the inauguration of the new Lamborghini Museum. In the afternoon, the convoy of Miuras will continue on to Varano de’ Melegari, with a stop at Dallara Automobili where Gian Paolo Dallara, one of the fathers of the Miura, will greet the tour’s participants. On June 10 the vehicles will set off from Parma towards Viareggio with a stopover in Liguria, in the magnificent setting of Portovenere. On June 11 the Tour will wind its way into Tuscany, passing through unique settings such as Lucca and Florence, where the vehicles will arrive on the afternoon of June 11 and will be on display until June 12.