Porsche claimed its 17th overall Le Mans victory at the 83rd running of the famous 24-Hour race with authority in a dramatic one-two finish for the German manufacturer.

The Audi R18 e-tron quattro cars were fast but unfortunate. André Lotterer, Marcel Fässler and Benoît Tréluyer, despite an early puncture, were battling for victory before a large section of the engine hood came adrift on their R18 on Sunday shortly before 7.00 and caused further damage to the car. The repair was accomplished in 6.56 minutes, but the two lost laps could no longer be recovered.

“That was motorsport at the very highest level. The spectators witnessed a tremendous endurance race in which the two Group sisters, Audi and Porsche, fought the expected fierce and thrilling duel for victory,” said Prof. Rupert Stadler, Chairman of the Board of Management of AUDI AG, who was one of the first people to extend congratulations in the Porsche pits after the checkered flag fell. “We can only congratulate our colleagues from Stuttgart on this success because we know exactly how difficult it is to win this race.”

Porsche only returned last year to the top level of endurance racing, attracted by the new efficiency regulations. In the brand’s Research Center in Weissach the most innovative car of the entire grid was developed. The Porsche 919 Hybrid has a trend-setting downsizing turbo engine and two energy recovery systems, which all together create a powertrain delivering around 1,000 HP. It works as a racing laboratory for the highest efficiency of future road going sports cars.

In qualifying the three Porsches not only locked out the front of the grid with a one-two-three, but also set a new qualifying record. The the performance of the pit crew was also crucial, as they managed 90 pit stops in total and were significantly faster than the competition.

The winning #19 prototype had started third on the grid, and for a short time at the beginning even dropped down the order to eighth before settling in sixth for a longer period. Of all things, it is the rookie crew that won the monstrous classic. Neither Formula One driver Nico Hülkenberg, who had the joy of being in the car at the most emotional moments of the race, being the start and the finish driver, nor Earl Bamber brought Le Mans experience with them. Nick Tandy, the third driver of the winning trio, had at least done two Le Mans 24-Hours for Porsche in the GT class. By doing super fast laps, staying calm but highly focused, the three of them drove a race with no errors and won it by their own merits.

In the early stages of the #17 Porsche had been leading. However, a one-minute stop-and-go penalty at the end of the first third of the race dropped them back to fourth. Timo Bernhard, Brendon Hartley and Mark Webber kept their heads down and worked their way up to second place.

The crew of the third Porsche 919 Hybrid had a rather tricky race. Pole-setter Neel Jani lost the lead right after the start to Timo Bernhard. For much of the race the drivers were not happy with the car’s stability under braking, and two off track excursions didn’t help their cause. Given the chronology of events, fifth place was all the team could manage.

“It is an incredible achievement to win Le Mans in only our second attempt since Porsche’s return. I have to thank this brilliant team that has been growing together over the last three and a half years. The Porsche board backed us one hundred per cent from the word go. It will take a few days to realise what we have achieved. I know that a lot of people have virtually lived for this dream to come true and have pursued it with the greatest commitment.” 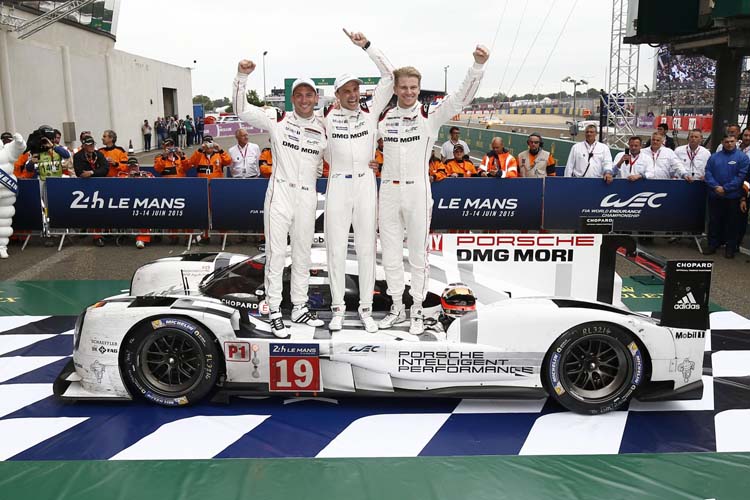 “I enjoyed every moment, these cars are great fun to drive and then to be on a huge track like this one. The pace was really high, and not what you would expect from endurance racing. Especially at night when the temperatures came down a bit, the car was fantastic to drive. Of course, I didn’t think I would come here and rock ’n’ roll this race, this would be silly because there are so many challenges in that race. However, we did it and we did it together.”

Corvette Racing stood atop the podium in GTE Pro as Oliver Gavin, Tommy Milner and Jordan Taylor completed 337 laps for 2,864.50 miles in a frantic battle that eventually saw the Corvette win in the class by five laps. Sunday’s victory goes along with Corvette Racing’s wins earlier this year in the Rolex 24 At Daytona and Mobil 1 Twelve Hours of Sebring in the TUDOR United SportsCar Championship.

It also marked a significant turn in the fortunes for Corvette Racing in the span of four days. The No. 63 Corvette C7.R of Antonio Garcia, Jan Magnussen and Ryan Briscoe was withdrawn from the race following a hard crash with Magnussen driving. A small piece of debris inside the pedal box caused a throttle malfunction and the Corvette to skid and spin out of control. Magnussen – part of the winning lineup at both Daytona and Sebring with Garcia and Briscoe – was uninjured.

Instead of folding, Corvette Racing marshaled all its effort around the remaining Corvette C7.R. In addition to the eighth victory for the Corvette brand and Corvette Racing in France, Gavin won at Le Mans for the fifth time, Milner the second, and Taylor for the first time.

“I am proud of how the No. 63 and No. 64 drivers, engineers and crew came together to rally around a single Corvette C7.R entry for the race after Thursday’s unfortunate incident. They prepared thoroughly and had each others’ back all race long. Perseverance, teamwork and execution were keys to the winning effort. It was very emotional to be in the garage with the entire team when the checkered flag dropped. The Corvette Racing team simply never gave up.”

Gavin set the tone early in the race Saturday by move up three spots from seventh on the GTE Pro grid to as high as fourth in his first two stints. Milner followed with a triple stint on his Michelin tires that saw he and the Corvette move from sixth – where he slotted into the field after the leaving pit lane on his first laps – to the class lead.

From that point, the three Corvette Racing drivers figured prominently in a lead battle that saw the Corvette go up against multiple competitors in the race’s top production-based class. The climatic moment came with less than two hours remaining. Running second at the time, Gavin caught and then quickly passed Toni Vilander, who eventually lost five laps in the garage with a mechanical issue. Victory in sight, Gavin drove a smooth final stint with no issues – a fitting end to drama-filled four days.

KCMG team and the ORECA 05 won LM P2 in a closely fought race up until the end in a class that has rarely been that competitive. Nicolas Lapierre, Richard Bradley and Matt Howson who took the lead right from the very first minutes – having started from the pole The No. 47’s drivers were at the top of the leader board in class for 23 out of 24 hours, dropping down to the second place “only” at the end of hour one.

“It’s a big day for KCMG and the ORECA Group” says ORECA CEO Hugues de Chaunac. “We’ve been waiting for that day since 2011 and since the first laps of our first LM P2. Congratulations to KCMG team and their three drivers. A special ‘bravo’ to Nicolas who we’ve seen growing up in endurance. This win is the greatest award for our manufacturer department as well as our engine department in Magny-Cours. To win the 24 Hours of Le Mans with a prototype that is just three-month old, and dominating the race from beginning to end, it’s incredible. We would have never dared dreaming of it, but together with KCMG we’ve done it. It’s fantastic! It’s incredibly motivating for our future projects in the discipline, whether on the international, European or American scenes.”

The ORECA 05/KCMG #47 started from the pole and stayed in the lead of its class up until the first refueling. Throughout the second race hour the car regained the lead and never let go of it. But after a drive-through penalty because of an infraction during a pit-stop and a repair of the required amount of lighting, the cars chasing them had managed to catch up by early in the morning. After going straight on into the gravel, the ORECA 05 had to battle until the chequered flag, managing their strategy just right with just an over 50 seconds’ gap at the end.

For more on the 83rd running of Le Mans, visit www.24h-lemans.com.