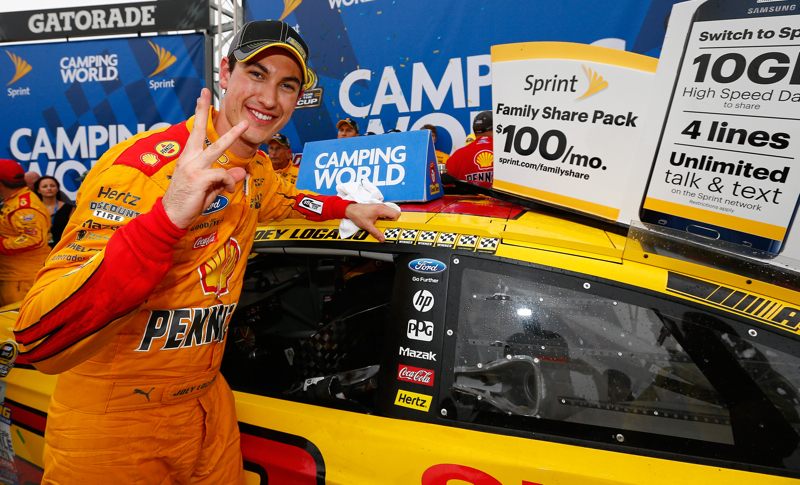 Historic, memorable, and one for the record books. Any of these descriptions on its own would be an accurate way to describe Sunday’s race at Talladega Superspeedway where Joey Logano wheeled his No. 22 Shell Pennzoil Ford to Victory Lane for the third race in a row. The victory makes Logano the first driver to ever sweep a Chase Round, and the first Ford Performance driver to win three consecutive races since Rusty Wallace did so in 1994.

“I am so proud of this team,” said Logano in Victory Lane. “Three in a row is unbelievable. I don’t even know what to say, I am speechless. Dreams come true I guess. We have to keep this dream rolling. We have a long way to go. We are back to zero going into Martinsville, so we need to make something happen in the next three races.”

“What an incredible race,” said Doug Yates, CEO of Roush Yates Engines. “To win three in a row with Roush Yates and Ford Performance power, sweep the Contender Round and win Talladega two years in a row is amazing. It was a total team effort by everyone at Roush Yates, Team Penske and Ford Performance. Joey, Todd and the No. 22 team did a great job, and I couldn’t be more proud.”

With his spot in the next round of the Chase heading into Sunday already secured, Logano started from the 10th position and led twice for 20 laps, but it was the green-white-checkered attempt at the end of the race that decided the fate of many drivers looking to move onto the next round. With the caution coming out on the final lap, NASCAR reviewed the finish and Logano was declared the winner for the third time in as many races.

“I think if we sat down prior to this round and said someone would win all three they would have said you were crazy,” said Team Owner Roger Penske. “This is not just [about]who is here at the race track but the people who support us back at the shop. There are 350 people working every day and we don’t see those folks. Our sponsors, Shell Pennzoil and no question the motor was strong today with Roush Yates and Miller Lite. We had our best game [face]on for the last three races and we have proven it with the success we’ve had. We have been in this position before and we know how tough it is to stay on top.”

Logano’s win at Talladega was his sixth NASCAR Sprint Cup Series victory of the season and 14th of his career.