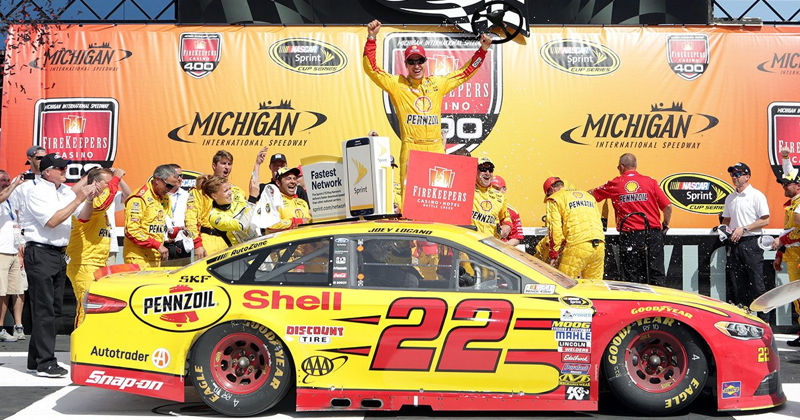 Joey Logano laid down his signature triple burn out as he captured his first win of the 2016 season in Ford’s backyard, Michigan International Speedway. As the exclusive Ford Performance engine builder for NASCAR, Ford and Roush Yates Engines also recorded its 100th NASCAR Sprint Cup points win. In partnership with Ford Performance, Roush Yates Engines developed, tested and built the engine that powered the No. 22 to victory lane in the FireKeepers Casino 400.

Logano, driver of the Team Penske No. 22, made a dramatic statement on the track by taking his first lead of the day on lap eleven and going onto lead 138 of the 200 race laps, in the FireKeepers Casino 400. Logano took the checkered flag after taking the lead during a restart with eight laps to go. The No. 22 led Team Penske to their fourth overall team win of the 2016 season and his second at Michigan since 2013. This also made Logano’s 15th career win and secures his position in the Chase alongside Keselowski. Brad Keselowski, No. 2 of Team Penske, finished a strong fourth and led a total of 10 laps.

Logano dominated the day and adapted to the new aero package quickly by taking the Ford Fusion to the pole in the Coors Light Pole Qualifying event Friday afternoon, running 199.557 mph. During the 400 mile race on Sunday, there were a few lead changes and several restarts. Logano executed the restarts perfectly, pulling away from rest of the field, leveraging the horsepower of the Roush Yates Engines FR9 Ford V8 race engine on the fast two-mile oval. As NASCAR commentators’ stated with four laps to go, “No. 22 gives final good-bye look and closes the door on the rest of the field.” This was also a record making day for Team Penske, taking home their 50th win with Ford, since switching manufacturers after the 2012 season.

“Obviously racing is hugely important to us at Ford; it’s part of our DNA,” said Dave Pericak, Global Director, Ford Performance. “So to be able to win in our backyard means a lot to us and then obviously to take this trophy home and share it with all of our employees. And obviously to be able to do all this and celebrate Roush Yates’ (Roush Yates Engines) 100th win in Cup is just absolutely phenomenal. It just means the world to us.”

“It’s just a special day,” said Doug Yates, President and CEO of Roush Yates Engines. “To achieve that (100th win) at Michigan, just couldn’t happen at a better place, and really all the credit goes to Ford Motor Co. and all the great employees at Roush Yates Engines. I’ve never been more excited about racing. I’m so proud to be with Ford Motor Company and be part of their team.”