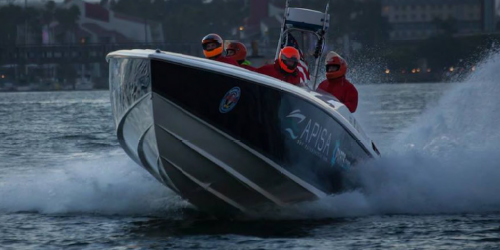 A Lucas Oil Ocean Cup team left the Golden Gate behind them at just past 8:30 a.m. on October 12 in their 48-foot APISA endurance boat and crossed the Queen Mary finish line just after sunset to establish a world record for the Golden Gate to Queen Mary endurance run at 9 hours, 50 minutes and 51 seconds. The American Power Boat Association (APBA) sanctions this world record, as well as the Union Internationale Motonautique (UIM), which is the world’s recognizing body.

“Mission accomplished,” said Nigel Hook, captain of teammates Andy Hindley, Dan MacNamara, and Lance Ware. “The Pacific was vicious today, which isn’t unexpected, but the real impediment was the water in the diesel fuel which forced us to stop many times.” Andy Hindley was quoted as saying, “There were more knocks and bangs during this 10-hour day trip than there were during the 52-day leg during the Round the World race.” 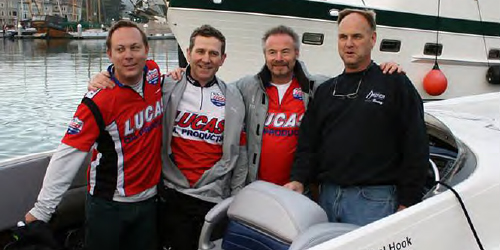 From the Captain’s log
We expected the rough water in the “potato patch”, the area under the Golden Gate Bridge, but we were a little surprised to hit such big water just after the patch. We were running in six footers instead of the usual swells that can be comfortably flown over. The 48′ APISA, with its Scarab deep V-hull, took these waves in stride, however the ride wasn’t comfortable and the boat was taking a beating when running 70 mph. The first issues occurred when we hit a huge hole knocking loose a wiring harness, but Dan fixed that quickly and we were back under way.