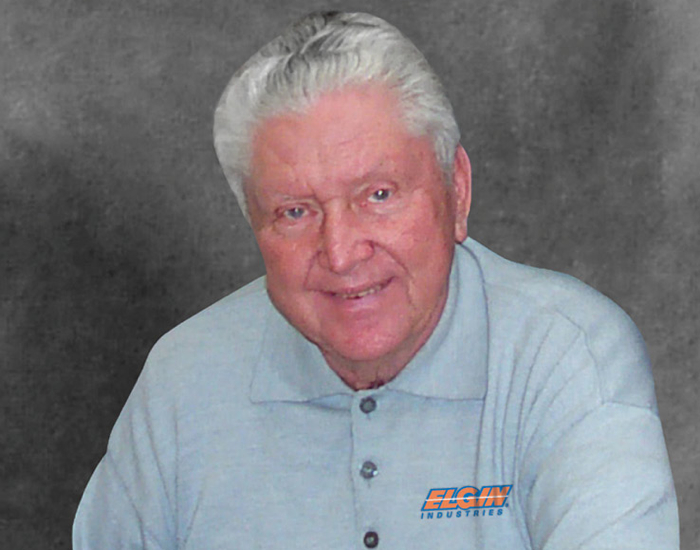 Born and raised in Elgin, Skok assumed control of Elgin Industries after his father, company founder Martin J. Skok Sr., suffered a stroke in the early 1960s. A graduate of Elgin Academy and Northwestern University, Skok over the next 50 years directed the growth of the company’s manufacturing and distribution operations, product line and portfolio of customers. He also built on his father’s legacy as a pioneer in professional motorsports. The Skok family campaigned the iconic Elgin Piston Pin Special in the Indianapolis 500, provided financial backing for the popular Elgin National Road Race, participated in Mexico’s La Carrera Panamerica, and were early partners to Anthony “Andy” Granatelli, who later became one of racing’s best-known engine builders, team owners and promoters.

Skok’s most significant success, however, was in guiding his father’s company, established in 1919, to international prominence while maintaining its focus on quality, leading-edge technology and exceptional customer service. Founded as a manufacturer of a single product line – piston pins – Elgin Industries today is a fully integrated, U.S.-based supplier of internal engine and chassis components and one of the world’s premier manufacturers of push rods and complete valve train packages. Customers include Fiat Chrysler, Ford Motor Company, General Motors, Harley Davidson, Mack, Navistar, JASPER Engines and Transmissions, and several leading replacement parts distributors in North and South America, the Middle East and other regions. The company operates modern, expansive engineering, manufacturing and distribution operations not far from where its founder first rented a small production facility more than 96 years ago.

“My dad never lost his love for the Elgin community, and while many other manufacturers have moved their operations to low-cost countries, he passionately believed in the quality and value of products designed and built in the U.S.,” said his son, Elgin Industries President Bill Skok. Two of Skok’s other children – Cheryl Hogrewe and Thomas Skok – are active in the company’s daily operations, while his son John is retired. “We, and all of our employees, share his passion for quality and customer satisfaction, which is perhaps his greatest legacy,” Bill Skok said.

Skok, who also is survived by his wife of 65 years, Carolyn Doyle Skok, was equally committed to his community, church and other local organizations. He was a member of the Elk’s Club and American Legion, past board member of Elgin National Bank and Elgin Academy, and deeply involved in the St. Thomas More and St. Laurence Catholic parishes of Elgin. He was active in several industry organizations, including National Engine Parts Manufacturers Association, Automotive Sales Council, Automotive Engine Rebuilders Association, Production Engine Builders Association, and Auto Care Association.

In addition to his wife and four children, Skok leaves eight grandchildren and one great grandchild.

Memorials may be made to St. Laurence Catholic Church, 565 Standish St., Elgin, Ill. 60123, or the American Legion.