The new Williams F1 car livery was officially unveiled today at an event in London to launch the new partnership with Martini, makers of some very fine vermouth. The new cars’ color scheme features the iconic Martini stripes, marking a new era for the team and a return to Formula One for one of international racing’s most historic brands. 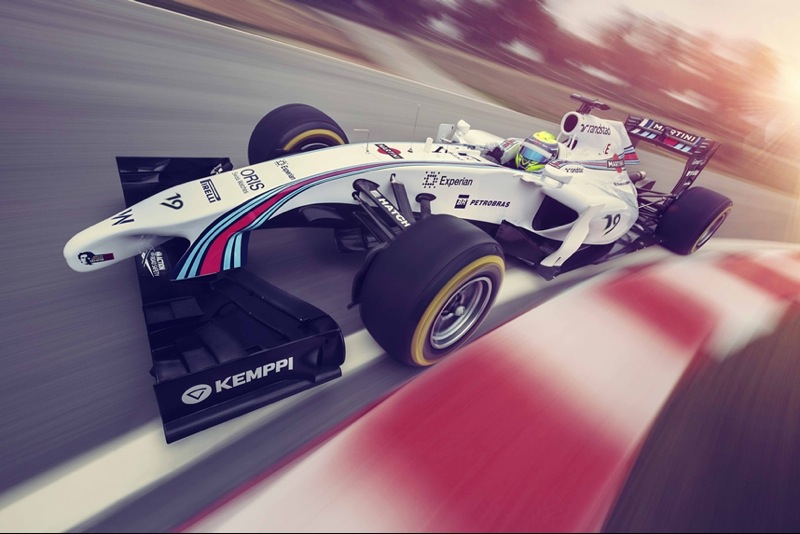 Williams has undergone some significant changes over the winter in preparation for the 2014 season with a new driver-up that includes Felipe Massa joining Valtteri Bottas, supported by new test and reserve driver Felipe Nasr and development driver Susie Wolff. The team also has a new engine partner in Mercedes HPP and has recruited a number of senior engineering personnel to augment existing talent. Commercially, the winter has delivered a number of new partners which affords financial stability to invest and grow. Today is the culmination of these changes with the official launch of Williams Martini Racing. 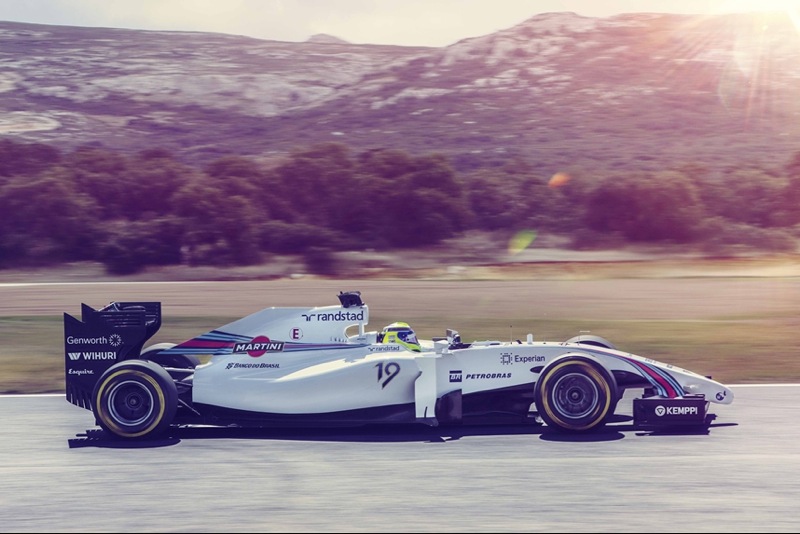 The new look team will take to the track for the first time at Albert Park in Melbourne, Australia next week in what is set to be one of the most unpredictable seasons in recent memory following a number of key regulation changes.

Sir Frank Williams, Founder and Team Principal, said: “2014 is going to be a fascinating season, with regulation changes of this scale often shaking up the grid and creating opportunities for teams to make a good step forward. Over the winter we have proved our ambition by making a number of positive changes; we welcome a new driver pairing, new senior technical personnel, and a number of new commercial partners for 2014 … This partnership is a milestone in our history and we look forward to working closely with Martini over the coming years.

“In testing the car has covered an impressive amount of mileage, which is testament to the hard work of everyone in the factory and our colleagues at Mercedes. We have developed a very strong working relationship with them which has proved vital in understanding the new power unit and maximising its performance. We head to Australia next week excited about the season’s prospects.” 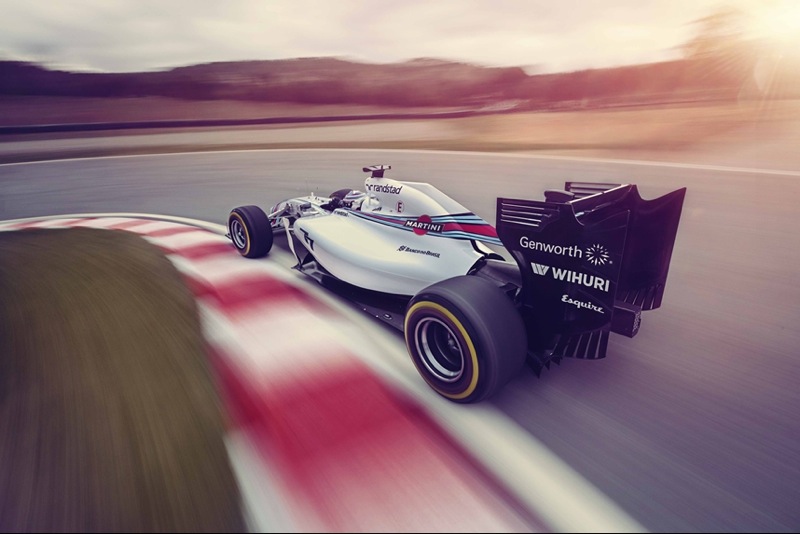 Commenting on the Williams Mercedes FW36 and the team’s preparations for the Australian Grand Prix, Pat Symonds, Chief Technical Officer, said: “The FW36 is the culmination of a huge project to design and build a vastly different car due to a number of regulation changes. At the forefront will be a revolutionary new power unit, with last season’s 2.4litre V8 engine replaced with a new 1.6 V6 turbo hybrid power unit with greater energy recovery capability. With these engine changes Williams has welcomed a new technical partner in Mercedes-Benz HPP. The 2014 regulations have set the sport’s engineers the challenge of completing a 300km race distance on a fuel load of 100 kg. To achieve power outputs comparable to last year, the new power unit will require a 30% increase in energy efficiency from the new Energy Recovery Systems.

“It has been hard work for everyone across the design, manufacturing and utilisation of the car throughout winter testing. Testing has not been without difficulties, but it has been successful for us in terms of reliability, race pace and qualifying performance.”

Felipe Massa: “Everyone at Grove has worked incredibly hard on the FW36 and I will be looking to unlock the car’s potential and reward everyone for their efforts.”

Valtteri Bottas: “2014 feels like a new start for the team …Testing has been very productive for us and we have learnt a lot about the FW36 and its characteristics. I have developed a lot as a driver over the past year and with a new car that I’m confident will be a step forward compared to last year, this is a season that I hope to show people my true potential. I also have a highly experienced teammate alongside me in Felipe who I can learn a lot from. We will be pushing each other hard this season, and working together to keep improving the car and secure some good results.”

Marini Racing’s Heritage
Martini’s first sponsorship program initially began at the 12 hours of Sebring in 1962 with an Alfa Romeo SZ Tronica. In 1968 they sponsored a minor event at the Hockenheimring, after which, Martini Racing was formed to enter two Porsche 907s in several sports car races in 1969 to back up the factory effort. During the 1970s, Martini gained notoriety for sponsoring Porsche and the works Porsche 917 that won the 1971 24 Hours of Le Mans. 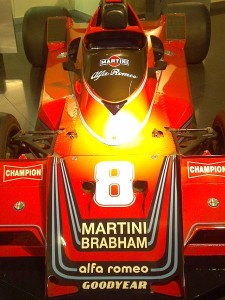 Martini Racing’s association with Formula One began in 1972 with the Italian team Tecno. However, the car was uncompetitive and Martini withdrew after an unsuccessful 1972 and 1973 season.

Martini sponsorship moved to Team Lotus in 1979, but they didn’t win a race even though they had the previous year’s World Champion Mario Andretti and the Lotus 79. Martini withdrew from F1 at the end of the season. [youtube id=”nvZuC5PxRbA?list=PLB5p__P3BVhDWepTdkTtaWOHWg5Qw8yFR” width=”633″ height=”356″]