For the second time in the event’s seven-year history, the Monster Energy Cup awarded $1 million to the rider who won all three, 10-Lap Main Events in a one-night-only battle for the coveted Monster Energy Cup. 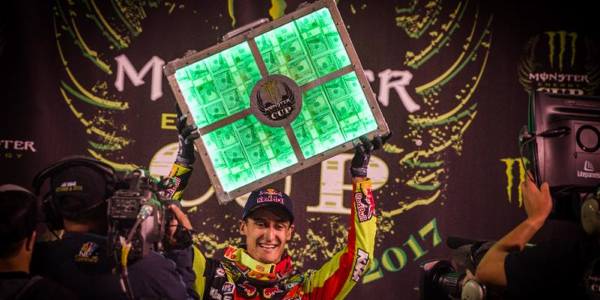 In the first Main Event, Monster Energy Kawasaki’s Eli Tomac, the reigning champion, put himself in a position to win $1 million by grabbing an early lead ahead of Musquin, but a downed rider forced a red flag and a Main Event restart. After which, Tomac found another early lead but a mistake on the third lap forced him out of contention and left the door wide open for Musquin’s first Main Event win. In Main Event 2, all eyes were on Musquin who commanded the lead for all 10 Laps and, by Main Event 3, Musquin grabbed another Holeshot and lead all 10 Laps on his way to the “Musquin Million.”

“It’s pretty unreal to go out and win all three,” Musquin said at the post-race press conference. “To see that someone is winning $1 million in one night at a Supercross race is so unique…it’s like being at the casino and just winning the jackpot.”