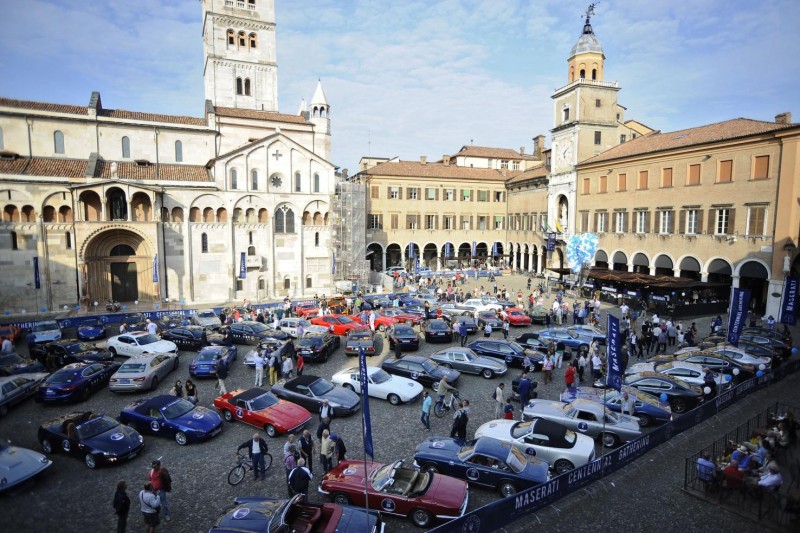 Last week saw the start of the Maserati Centennial International Gathering, a key event in the celebrations to mark the 100th anniversary of the founding of the Modena-based company. The first day of the official program, involving over 200 Maseratis and over 500 Maserati collectors and clients from 30 countries across the world, was dedicated to the city of Modena. Vintage and modern Maseratis began making their way into Modena in the early hours, lining up in Piazza Grande in the shadow of the Ghirlandina, the white stone bell tower that is the symbol of the Emilian city. Piazza Grande was also the venue for the meeting between Maserati CEO Harald Wester and the Mayor of Modena, Gian Carlo Muzzarelli, who officially welcomed the participants to the city.

Participating in the event are around ninety journalists from the main international markets in which Maserati is present – from the US (the biggest market in terms of unit sales) to China (second biggest market with the highest growth rate), the UK, Germany and Italy (the contenders for biggest European market), Australia and Japan. During the morning the international press visited the building, at no. 1 Via de’ Pepoli in Bologna, where Maserati opened for business for the first time on 1 December 1914. After this, they met with the direct descendants of the founders of Maserati: Carlo and Alfieri Maserati, the sons of Ettore and Ernesto Maserati respectively, who in December 1914 set out on an adventure with their brother Alfieri which is still going strong a hundred years later and which we are celebrating today.

“Of the many automobile producers born in Italy in the last century, only a few have reached such a milestone and this fills me with joy,” declared Alfieri Maserati. “The name we bear symbolises brilliance, innovation and the desire to create the unique and novel features we find in today’s cars.”