Mayhew Steel Products, Inc. (Mayhew Tools), the primary sponsor of Doug Coby and his #2 car for the 2017 NASCAR Whelen Modifed Tour, has announced Coby’s championship of the 2017 tour. The win marks the fifth championship title, and the fourth consecutive win, of the Whelen Modified Tour for the Milford, Connecticut driver. Mayhew Tools signed on with Mike Smergilio’s MSIII Racing and driver Coby after their 2016 championship of the tour in a move to elevate the company’s profile as a racing sponsor. 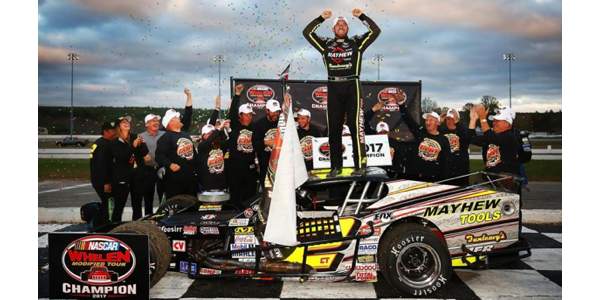 “As invested followers and fans of Doug Coby this race season, we are thrilled for his championship,” shared Eric Mills, Vice President Sales & Marketing, Mayhew Tools. “Our sponsorship of his car in the tour represents a partnership with the race team as well as a provisionary commitment of the tools we manufacture for the greater automotive community at-large.”

“There is a synergy in the quality and craftmanship that we instill into our tools and that in which Doug Coby brings to each race,” added John Lawless, president, Mayhew Tools.

Mayhew Tools has been leveraging racing sponsorships, since first serving as an associate sponsor of Bob Garbiano owned Mystic Missile in the 2016 Whelen Modified Tour. Racing sponsorships pose a win-win strategy for not only getting Mayhew’s tools into the hands of automotive professionals, but also capitalizes on increased brand awareness, while attaining successful racing partnerships. In addition to Coby and Garbiano, Mayhew Tools has also contributed to the following racing programs:

·        Supportive sponsor for Bobby Pierce driving the #63 truck in the in the NASCAR Camping World Truck Series at the famous Eldora Dirt Derby (July 2017).