The new 650S Sprint by McLaren GT is set for its global competitive premier this weekend at the penultimate round of the GT Cup race at Donington Park, UK. The 650S Sprint is developed and optimised for the track, and eligibility has now been confirmed to race in the NARRA US GT series, the SCCA GT Championship and the UAE GT series.

The covers were pulled off the McLaren 650S Sprint at the Pebble Beach Concours d’Elegance last month, and the race this weekend marks the European debut of the car, in the most public of arenas. Racing with McLaren GT customer team Von Ryan Racing, the 650S Sprint will contest three races during the weekend – one sprint race incorporating a driver-change on Saturday, followed by two shorter events on Sunday, with the drivers contesting one complete race each.

McLaren GT factory driver Rob Bell returns to the Von Ryan Racing team after running at this year’s Total 24 Hours of Spa in the 12C GT3. In addition, Bell has been involved in the development of the 650S Sprint, so he has extensive knowledge of the track-only racer. Bell will share driving duties with experienced Nürburgring-racer Lomas, who has shown good pace in testing ahead of the event. 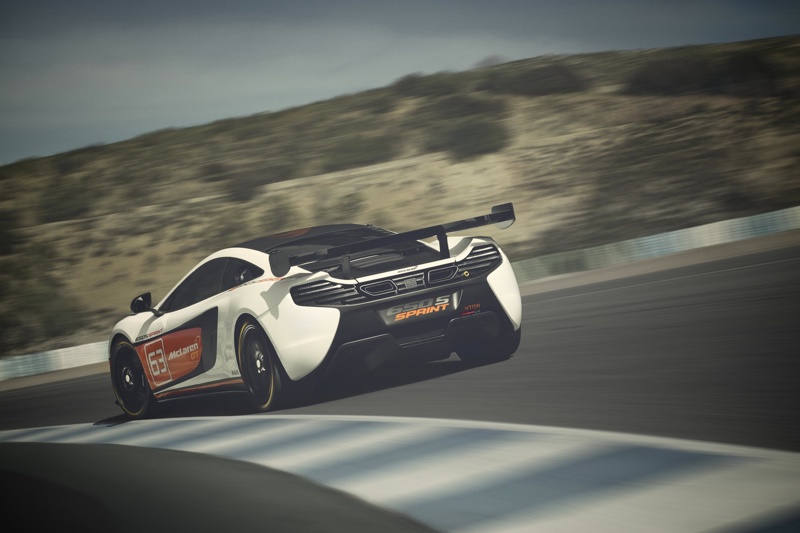 Based on the road-going 650S, the aerodynamically enhanced design of the 650S Sprint offers increased levels of downforce, and the revised air intakes offer optimised cooling of the 3.8-litre twin-turbo M838T engine. In the 650S Sprint, the proven powerplant is retained from the 650S roadcar, with a unique engine and transmission calibration to further enhance on track drivability and driver engagement.

The 650S Sprint is an evolution of the 12C GT Sprint and is priced at £198,000, and available from all official McLaren retailers worldwide or direct from McLaren GT.