McLaren Automotive has awarded an international internship to a budding engineering student from the University of Auckland, New Zealand.

Following in the footsteps of Bruce McLaren, McLaren’s New Zealand born founder, Thomas Evans has been chosen to be the second recipient of the internship. 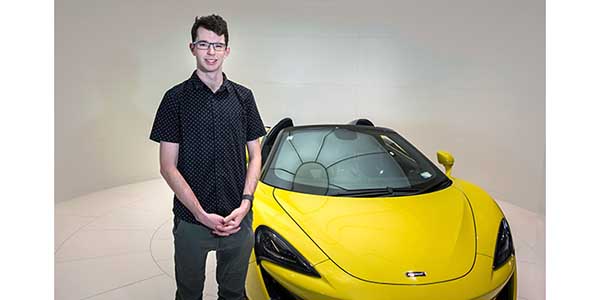 Thomas is in his penultimate year of a Bachelor of Engineering degree at the Faculty of Engineering where he is studying Engineering Science. He will spend around nine weeks at the McLaren Technology Center in Woking, Surrey, England where he will work alongside the company’s research and development engineers as well as gaining an understanding of other key areas of the business.

Nearly 60 years ago, Bruce McLaren travelled to England on a similar ‘Driver to Europe’ scholarship to pursue his motorsport aspirations before founding his own racing company, Bruce McLaren Racing, in 1963.

Since Thomas began studying, he has been involved with a group of engineering students at the University who design and manufacture a single-seater race car every year. His academic studies have explored automotive design and he is passionate about motorsport – a perfect fit for McLaren.

Commenting on the internship, Thomas said: “I’m honored to have been chosen to be the second recipient of the Bruce McLaren International Internship. Automotive engineering is a field that is very hard to get into so to get an opportunity like this with McLaren is amazing and not something I ever dared dream would be possible. I am excited to get to McLaren, meet the people and get started!”

Commenting on the internship, Amanda McLaren, Bruce’s daughter and brand ambassador for McLaren Automotive said: “It’s a great honor to have an international internship named after my father and I’m grateful to both McLaren Automotive and the University of Auckland, where my father studied, for supporting and making this happen to benefit young engineering talent.

“I know my father would be very proud of what McLaren has become as we now build … sports cars and supercars. I’m sure he would be equally proud of the internship, which also celebrates the strong links between Britain and New Zealand that exist today. I can’t wait to meet Thomas and I know he will get a lot out of his time here, working with and learning from all the teams across the business.”

Nic Smith, Dean of Engineering at the University of Auckland said: “The Faculty is delighted to be working with McLaren Automotive to offer Thomas, a bright New Zealand engineering student, the opportunity to visit one of the world’s most innovative automotive companies. I congratulate Thomas on being awarded this internship which is a fantastic opportunity for him.”