The McLaren Senna has been designed, engineered and developed with single-minded purpose: to be the ultimate McLaren track-concentrated car for the road. Legalized for road use, but not sanitized to suit it, the new Ultimate Series deliberately compromises McLaren’s trademark breadth of supercar daily usability; instead it provides the purest connection between driver and car, to deliver the most intense circuit experience of any road McLaren. 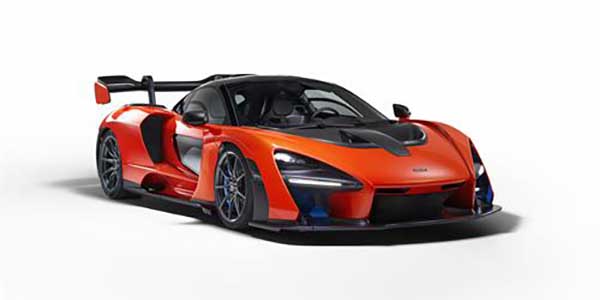 The technical recipe is classic McLaren Automotive supercar, a pedigree established and earned in the short time elapsed since the pioneering sports and supercar company was founded in 2010, but taken to another level entirely in the McLaren Senna. Ultra-lightweight construction, with carbon fiber chassis and body panels. Mid-mounted, twin-turbocharged V8 McLaren engine. Rear wheel drive. Sophisticated race-derived suspension that delivers an unparalleled blend of control and dynamic balance. Electro-hydraulic steering that rewards accurate inputs and gives the purest feedback. And two seats – but with absolute focus on the importance of the one that the driver occupies.

The carbon fiber Monocage III chassis that forms the core of the McLaren Senna is a further development of the structure that underpins the McLaren 720S and the strongest monocoque ever built by McLaren for a road-legal vehicle. Every body panel is made from carbon fiber, in line with a relentless focus on the weight of every individual component that has resulted in the McLaren Senna being the lightest road-legal McLaren since the iconic F1 road car, at just 2,641 lbs. 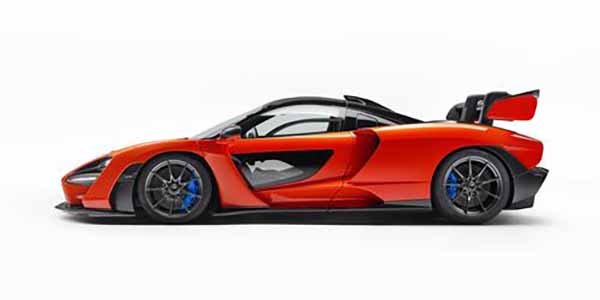 Given the famous name that this new McLaren bears, its unrivalled extreme performance and dynamic excellence should be no surprise. The legendary Formula 1 racing driver was renowned for his exceptional powers of concentration and single-minded focus on being the best on the track. The McLaren Senna driver is hardwired into the dynamic experience the car delivers. Their connection to the car comes through the steering wheel, the pedals and the seat. Every sensation that comes from driving at speed is precisely communicated, putting the driver in total control. 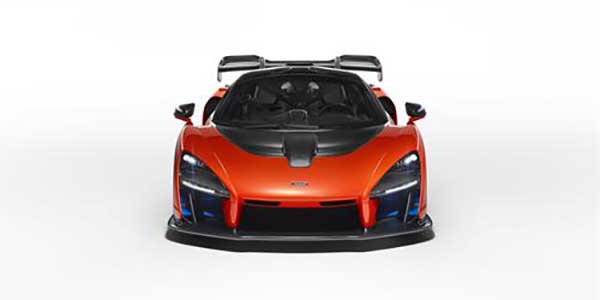 The indomitable spirit of Ayrton Senna has always been alive at McLaren and the McLaren Senna will further amplify his global legacy and link to the McLaren brand.

Just recently, the last of the 500 build allocations was discretely held back to be auctioned at an annual event for passionate devotees of the McLaren brand and its cars. With guests believing that every example of the new McLaren Senna had been allocated, excitement was palpable when the surprise auction was announced. Fierce bidding saw auctioneer Max Girardo kept on his toes before the gavel fell a shade under $2.7 million excluding taxes – more than three times the list price of the new McLaren Senna. The proceeds benefit the Ayrton Senna Institute for underprivileged children and youngsters in Brazil. 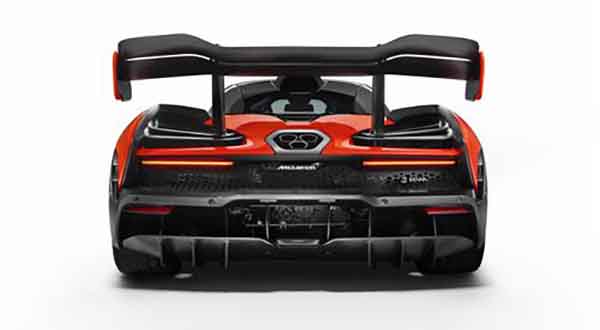 Visually, the McLaren Senna shocks. The first impression is of an aggressive, unforgiving machine, organic shapes having given way to a design language that is purposely fragmented in pursuit of absolute performance. With downforce and aerodynamic balance the guiding principles, this car is the purest expression yet of the ‘form follows function’ design philosophy embraced by McLaren.

Viewed from above, the body is nature’s most efficient shape – a teardrop – with body components ‘clipped’ onto the cabin to deliver optimal aerodynamic performance. McLaren’s designers went to extremes by cutting open the ‘shrink-wrapped’ body to reduce weight visually and functionally; while recognizably a McLaren in proportional terms, you cannot follow a single line from the front to the rear without it passing through a functional air intake or vent. 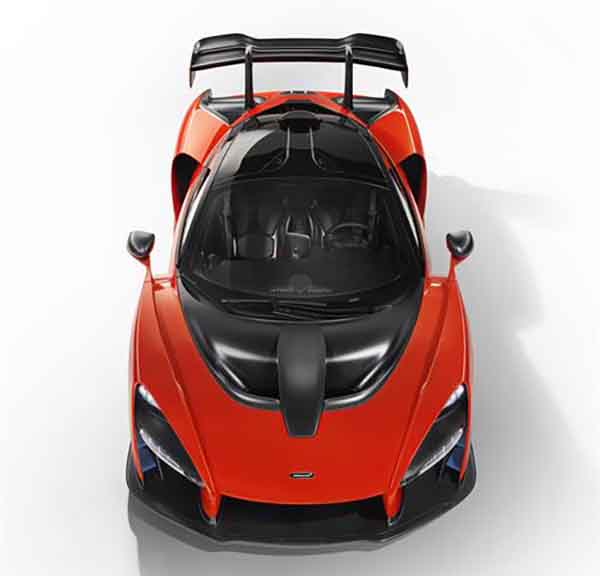 The McLaren Senna introduces a new generation of ground-breaking front and rear active aerodynamics, raising downforce and aero control to an unprecedented level to ensure the performance potential can be fully exploited. Every element of the body design, from the front splitter to the double diffuser at the rear, has been developed to optimize downforce and aerodynamic balance, whether under braking, adjusting the throttle mid corner, or applying power on corner exit. There is also an opportunity for added visual drama, with the front aero blades available finished in one of five ‘By McLaren’ theme specifications that include Azura Blue and McLaren Orange. The same linked accent color can also feature on the brake calipers, visible door gas struts and seat trims.

Cooling requirements played an equally crucial role in the overall design of the McLaren Senna: the rear clamshell, for example, was born from the twin demands of aerodynamic and cooling performance, with prominent ‘gurney’ flaps ahead of a succession of stepped louvers directing air away from the rear deck and down the sides of the body. The resulting area of low pressure draws hot air out from the high-temperature radiators and engine bay, with the louvres ensuring that the airflow does not impact the efficiency of the rear wing. The ‘slash cut’ finishers of the unique Inconel and titanium exhaust exit through the lowest rear deck (measured at the trailing edge) of any McLaren road car, the angle of the pipes directing exhaust gas away from the rear wing. The slim, rear LED taillights have been subject to the same exacting attention to detail as the headlights and every other aero-relevant component, the single-blade design minimizing interruptions to airflow.

The double diffuser at the rear of the car is unmistakable. Created as a single piece of carbon fibre, it begins under the rear axle and as it increases in height accelerates air out from under the vehicle. This creates a low-pressure zone that sucks the McLaren Senna even tighter to the ground. Equally unmissable is a huge, double-element carbon fiber rear wing that at its highest point sits 48 inches from the road when the car is stationary. Hydraulically actuated, the wing constantly adjusts to optimize the levels of downforce and aerodynamic balance and functions as an airbrake under heavy braking.

The depths of connection with the new Ultimate Series car will be experienced in full once in the driver’s seat and on a circuit, but the intimate relationship with the McLaren Senna begins before that, simply by entering the car. McLaren F1-inspired dihedral doors hinge forwards and upwards, opening with a portion of the roof to expose noticeably low sills and an aperture of sufficient size for drivers or passengers to easily enter or leave the cockpit, even when wearing a helmet and a race suit. 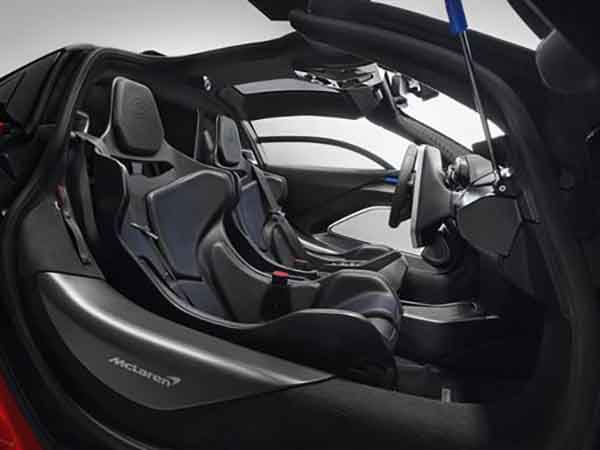 The doors, which are constructed of carbon fiber, feature two-piece glass side windows with a fixed top part and a smaller opening section below. Both the door upper (effectively part of the roof) and the lower half of the door side can be specified with glass as a replacement for the carbon fiber panels that are standard-fit. This enhances the sense of space inside the cockpit and in the case of the glazed door lower, dramatically reinforces the visual connection between driver and track environment. To accommodate the door design, the release mechanisms and window switches are housed alongside the engine start button in a carbon fiber console above the driver’s head.

The cockpit environment reflects the stripped-back, functional nature that is evident in every aspect of the McLaren Senna. Visual carbon fiber is used extensively. Dependent on customer preference, Alcantara or leather covers the seats, facia and side airbags, but the absence of any other interior trim both saves weight and reveals the construction of the doors. Even the gas struts are exposed to save vital weight. 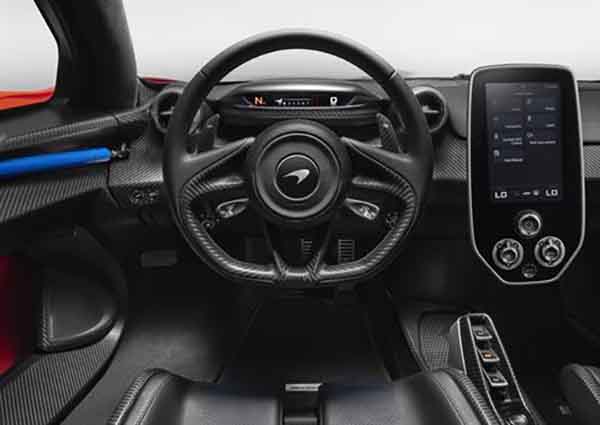 Driver controls have been deliberately kept to a minimum to reduce ‘cockpit clutter’ and the three-spoke steering wheel is free of buttons and switches, creating a pure focus on sensory feedback. All the information the driver needs comes from the high-definition McLaren Folding Driver Display and central infotainment screen. And while McLaren designers stopped short of removing the second seat altogether, there is no contingency for excess baggage; storage space is restricted to a chamber behind the seats integral to the Monocage III with just enough room for two helmets and race suits.

Codenamed M840TR, the 4.0-liter twin-turbocharged V8 engine at the heart of the McLaren Senna is the most powerful road car internal combustion engine ever created by McLaren, producing 789 hp and torque of 590 lb.-ft. The engine’s dry sump lubrication and flat-plane crankshaft are technologies with their roots in motorsport. Lightweight internal components reduce mass in the powertrain and combine with ultra-low inertia, twin-scroll turbochargers and electronically controlled wastegates to deliver lightning-quick throttle responsiveness. 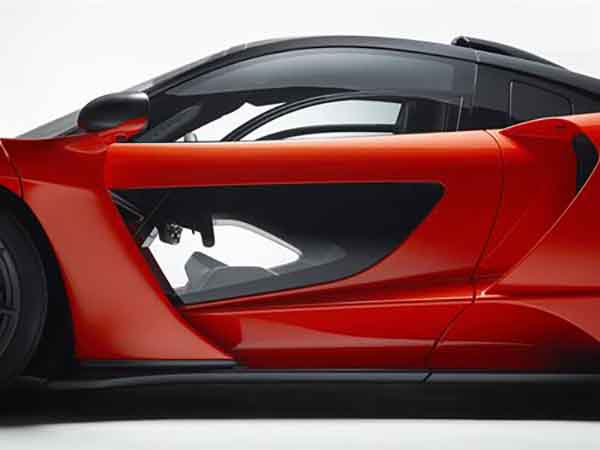 From the outset, McLaren engineers determined that the full mechanical symphony of the engine – from intake to combustion to exhaust – had to be central to the sensory experience. Those fortunate enough to drive the McLaren Senna will feel the cockpit come alive with the sound of air rushing into the roof-mounted ‘snorkel’ intake and mixing in the carbon fiber plenum, producing precisely tailored high-frequency sounds that deliver a vivid experience. At the same time, low-frequency sounds from the engine are transferred into the cockpit through unique engine mounts, exciting the double-walled rear structure of the carbon fiber Monocage and amplifying every change in engine revs, making it seem almost as if the V8 is sitting alongside the driver.

A dual-clutch, seamless-shift, seven-speed gearbox delivers power to the rear wheels. A fully automatic mode is the default, with the driver able to choose full manual control of gear shifts via paddles mounted on a rocker behind the steering wheel. The elongated carbon fibre paddles are optimized to be used both with or without racing gloves, and create a deep sense of mechanical connection with the McLaren Senna. 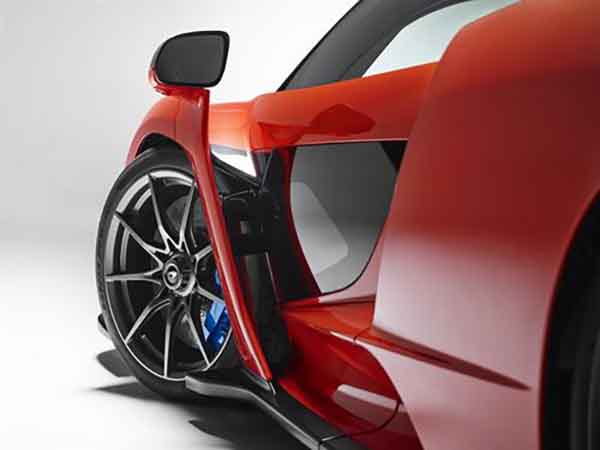 The character of the 4.0-liter twin-turbo McLaren V8 and the transmission can be tailored using the Active Dynamics Panel, with the driver having a choice of Comfort, Sport or Track powertrain modes. Whatever the mode, performance is suitably savage. Throttle response is immediate and neck-snapping, pinning the driver back into their seat.

RaceActive Chassis Control II (RCC II) hydraulic suspension works in harmony with front and rear active aerodynamics and the ultra-rigid Monocage III to deliver an incredibly intensive experience on a circuit. Every element of the McLaren Senna has been designed to maximize the connection between driver and car, at all speeds and in every situation. Painstaking work on the damping and steering weight has ensured that the car feels fully ‘alive’ well below its upper limits; even when the suspension is not fully loaded and tires not absolutely compressed, the rich texture of communication blends with the feedback transmitted to the driver as aero levels and cornering speeds build. 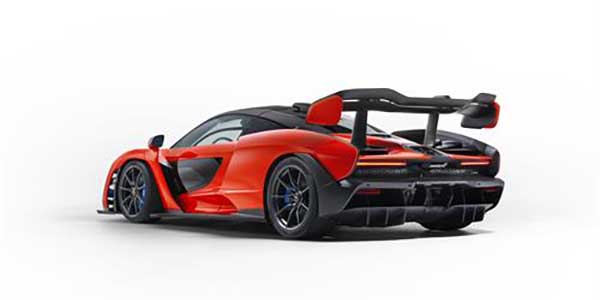 The adaptive dampers are interconnected hydraulically, both left to right and front to back, with two valves per damper to independently adjust for compression and rebound. The stiffness of the McLaren Senna is separately controlled using a kinetic roll system, or K-damper. The continuously variable RCC II system advances the control strategy introduced on the McLaren 720S and also adds a Race mode, which introduces a lower ride height, lower centre of gravity and significantly stiffer suspension.

Dynamic parameters are adjusted by the driver through the Active Dynamics Panel located on the centre console to select Comfort, Sport or Track modes or via a switch in a roof-mounted panel to access Race mode.

The braking system of the McLaren Senna is the most advanced ever fitted to a McLaren road car, using carbon ceramic discs and motorsport technologies to deliver extreme performance. Tire choice is equally focused, with bespoke Pirelli P Zero Trofeo R tires developed in conjunction with McLaren technical partner, Pirelli. Designed for race tracks but approved for road use, they enable a McLaren Senna to be driven to a circuit. Only one style of wheel is available: an ultra-lightweight alloy wheel with a race-inspired center lock system.

The third model introduced under the McLaren Track22 business plan, the McLaren Senna will be hand-assembled in England at the McLaren Production Center. Production will be limited to 500 vehicles, each costing from $1,000,000 including taxes and all already allocated.

The ultimate road-legal, track-concentrated McLaren hypercar will make its public debut in March, at the 88th Geneva International Motor Show.