McLaren Automotive will showcase the largest selection of models to date at this year’s Geneva Motor Show with the full three tier model range on display, including the latest in the recently-launched Sports Series – the McLaren 570GT. Practical enough for everyday use, the two-seat, mid-engined sportscar 570GT is the most refined and road-biased McLaren yet, designed with a focus on day-to-day usability and long distance comfort. It offers increased levels of practicality and comfort, while remaining a true McLaren.

The McLaren 570GT joins the 570S Coupé and 540C Coupé as the third model in the recently announced Sports Series family. The clean lines of the revised glasshouse give the 570GT a sleek and refined silhouette, and mark out the second of three bodystyles which will eventually complete the Sports Series. A standard fixed glass Panoramic Roof provides a bright, open cabin running through to the large rear glass hatch creating the most luxurious and relaxing McLaren driving environment.  As seen on the other models in the Sports Series, levels of craftsmanship throughout the interior of the 570GT are of the highest level, upholstered and specified with quality materials and the latest technologies throughout.

The 570GT is the most practical model ever launched by McLaren Automotive, targeted towards longer journeys and weekends away. As with all Sports Series models, ingress and egress are optimized through a lower and narrower sill, while the signature dihedral doors open with a more upward arc. Within the spacious and ergonomically-optimized cabin, a pair of eight-way electrically adjustable sports seats are upholstered in leather as standard. The control interfaces for the air conditioning, telephony, navigation and audio systems are managed through the centrally-mounted touchscreen, while vehicle setup is configurable via the TFT LCD digital instrument cluster.

The standard fixed glass Panoramic Roof provides a bright, open cabin with a dramatic glasshouse design running through to the large rear glass hatch. The roof glass is treated with 18 percent transmission tint – the same as the glass roof of the McLaren P1 – and also features SSF (Sound & Solar Film) to absorb solar radiation while providing additional noise insulation. With the increased glass area of the 570GT, cabin temperatures are regulated and maintained by an enhanced dual-zone air conditioning system. The system allows fully automatic and independent settings for passenger and driver. A two-stage Automatic function – ‘Auto’ and ‘Auto Lo’ – allows a desired temperature to be obtained, with the latter setting limiting the speed of the fans to minimise fan noise within the cabin.

The front luggage area remains unchanged from the Coupé, while further space is available behind the seats on the leather-lined Touring Deck. This additional space is accessed via the side opening Glass Hatch. The Glass Hatch opens on the kerbside whether left- or right-hand drive and is framed by carbon fiber providing significant torsional rigidity.

Refinement and day-to-day usability are further enhanced through the latest tire technology from McLaren Automotive technical partner, Pirelli. The 570GT features specially developed Pirelli P Zero tires which reduce in-cabin road noise by up to three decibels. The unique characteristic of the tire is the innovative Pirelli Noise Cancelling System (PNCS): a new technology patented by Pirelli that reduces road noise from the grooves within the tire, designed to absorb vibrations and reduce transmission into the cabin.

As with all models in the Sports Series, the 570GT is extensively equipped throughout with the latest technologies and the highest quality materials. As standard, the new model features extended leather upholstery, electrically adjustable heated seats with memory function, front and rear parking sensors, an electric steering column with easy entry / exit function, soft close doors and a quieter exhaust system compared to the 570S Coupé. Lightweight noise absorbing and damping materials are used to line the Touring Deck and bulkhead, further enhancing the level of refinement within the cabin.

Available from launch are a range of ‘By McLaren’ designer interior specifications, designed to demonstrate the breadth of personalisation available. As with the 570S Coupé, these are available in a choice of Luxury or Sport configurations, and are designed to showcase the interior design of the 570GT, and compliment the exterior color choices.

The eight speaker McLaren Audio Plus system is fitted as standard. This system – optional on the 570S Coupé – includes two 100mm mid / bass drive units adding to the clarity and depth of the sound, and two 25mm tweeters in the rear of the cabin which balance the sound to ensure the occupants have a greater sense of immersion. A 12-speaker Bowers & Wilkins system is also available re-tuned to the different interior acoustics of the 570GT. The system comprises five 25mm aluminium Nautilus tweeters, five 100mm Kevlar mid-range drive units and two 200mm carbon fiber & Rohacell bass subwoofers. All speakers are driven by a fully digital 14-channel 1280W Class D amplifier. 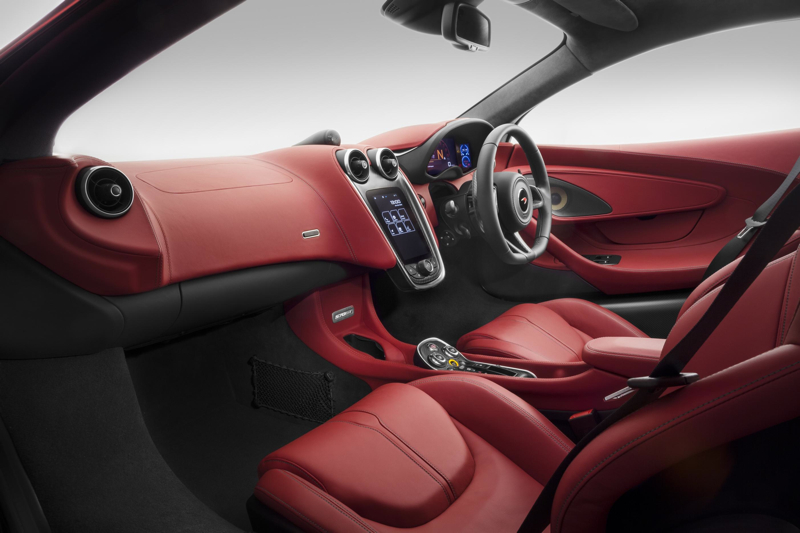 Under the skin, the 570GT has been developed with a unique dynamic setup to reflect its positioning, while retaining the supercar levels of engagement experienced on the 570S Coupé.  Pure McLaren design and engineering combine to produce a car with breathtaking performance yet increased levels of luxury and refinement. Sharing the newly developed suspension system with the other models in the Sports Series, the 570GT emphasizes long distance comfort through further fine tuning to the system which includes a reduction in spring rate stiffness of 15 percent at the front and 10 percent at the rear. Independent adaptive dampers can be dynamically adjusted through Normal, Sport and Track settings, and are coupled to front and rear anti-roll bars.

The overall set up of the 570GT has been calibrated to enhance road and motorway driving, and aid ride quality over poor road surfaces. The electro-hydraulic steering system is retained from the Coupé models but with a reduced ratio – by two percent – and has been specifically designed to smooth out driver inputs at high cruising speed.

The 570GT is fitted with the McLaren-developed 3.8-liter twin turbo V8 M838TE engine which debuted in the 570S Coupé. Power and torque remain at 562 hp and 443 lb. ft. and power is delivered to the rear wheels via a seven-speed seamless-shift transmission with adjustment through Normal, Sport and Track settings to produce one of the most rewarding and engaging driving experiences in the sports car class. The settings include bespoke gearchange calibrations with comfort (Normal), Cylinder Cut (Sport) and Inertia Push (Track) technologies all available. As with all models in the McLaren Automotive range, the McLaren 570GT is factory-filled with Mobil 1 New Life 0W-40.

The revised design of the 570GT sees the glasshouse with clean and sleek lines leading to the rear of the car. With the side-opening Glass Hatch and increased luggage area, the 570GT features a unique aerodynamic package, including an extended fixed rear spoiler – 10mm taller than that fitted to the Coupé models – designed to offer the same levels of aerodynamic performance as the distinctive flying buttresses of the 570S Coupé.

The front end design of the 570GT is shared with that of the 570S Coupé, with the front bumper featuring a pronounced point which generates the centre of pressure, piercing the air to reduce drag and forming four quadrants. This aerodynamic feature is designed to separate the airflow above and below the bodywork, and along each flank. As seen on the other models in the Sports Series, the bonnet features strong crease lines which optimize airflow over the front fenders and into the side air intakes. Aero Blades below the front bumper are angled to produce an area of high pressure ahead of the low temperature radiators.

First introduced on the iconic McLaren F1, and now signature to each of the models in the McLaren Automotive range, the 570GT features distinctive dihedral doors, which open upwards and outwards to aid ingress and egress from the cabin. The design includes a ‘floating tendon’, designed to channel air into the side air intake. Body-coloured door inserts, unique to the 570GT, create a more understated side profile and further differentiate the 570GT from the Coupé models.

As with all McLaren models since the introduction of the MP4-1 Formula 1 car in 1981, the 570GT uses a carbon fiber chassis. The MonoCell II debuted in the 570S Coupé, and is shared across the Sports Series models. Weighing just 75kg, the lightweight yet extremely stiff chassis contributes to a dry weight of 2,976lbs. This equates to 0-62 mph in 3.4 seconds, 0-124 mph in 9.8 seconds, with a top speed of 204 mph. Despite supercar performance figures, there have been no sacrifices to the everyday drivability and practicality of the 570GT which returns 26.6 mpg.