We’ve known for some time now that McLaren was readying a GTR badged version of its flagship P1 model. The GTR badge hearkens back to the McLaren F1 GTR, which was victorious at the 1995 24 Hours of LeMans. Now, on the eve of the 20th anniversary of the victory, the English manufacturer is having another go around.

While the McLaren P1 GTR doesn’t make its official debut until March 3rd at the Geneva Motor Show, we now have the first official complete images of the car, and to say the least, we’re quite impressed. The P1 GTR sport’s McLaren’s award-winning 3.8 liter twin-turbo V8, coupled to the same hybrid power unit as the standard P1. Power output has jumped by 83 horsepower over the standard road car, with the final peak horsepower number being 986. Overall, most of the power bump comes from the engine, with the electric motor still only generating 197 horsepower. The engine has been lightened as much as possible, with a new performance titanium exhaust being the key example.

The aerodynamic profile of the P1 GTR has also been greatly enhanced over the standard P1. The car is 80 mm wider in the front, but the width increase is accompanied by an aggressively styled new front splitter. The P1 GTR also has a much lower profile than the stock P1, sitting 50 mm lower to the ground. 19 inch lightweight alloy wheels are gripped by Pirelli slick performance tires.

You also may have noticed the massive rear wing, which sits 400 mm above the rear of the car but does render huge aerodynamic advantages. The wing increases rear down-focre by ten percent, bringing the total number to 1,455 lbs. at 150 mph. Use of lightweight components, such as a lightweight windshield and carbon fiber engine bay panels, allow for weight savings of 200 lbs. over the standard P1.

The P1 GTR will be  a very limited production run, and it is rumored to begin pricing at around 3.36 million dollars. However, notwithstanding the high price-tag, all units are likely sold out already. It’s also speculated that McLaren will bring some version of the car to LeMans in celebration of its predecessor’s historic victory; though it would probably have to be stripped of its hybrid power unit to compete in LeMans GTE. 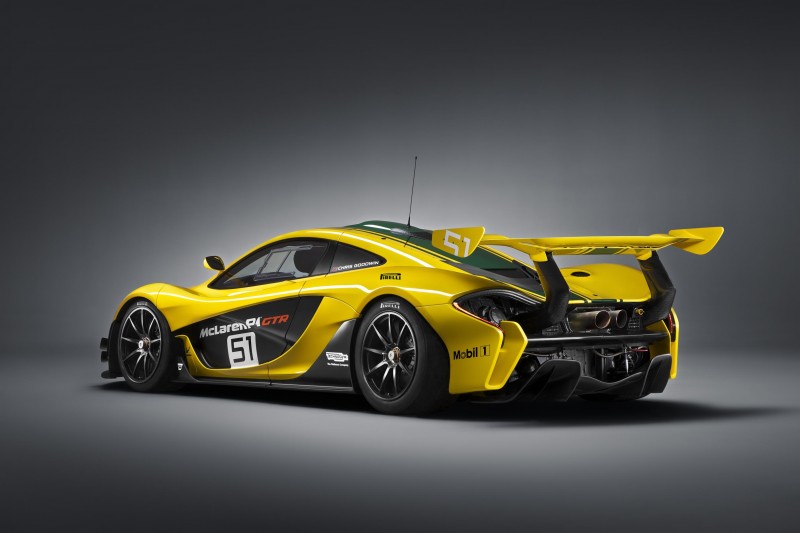