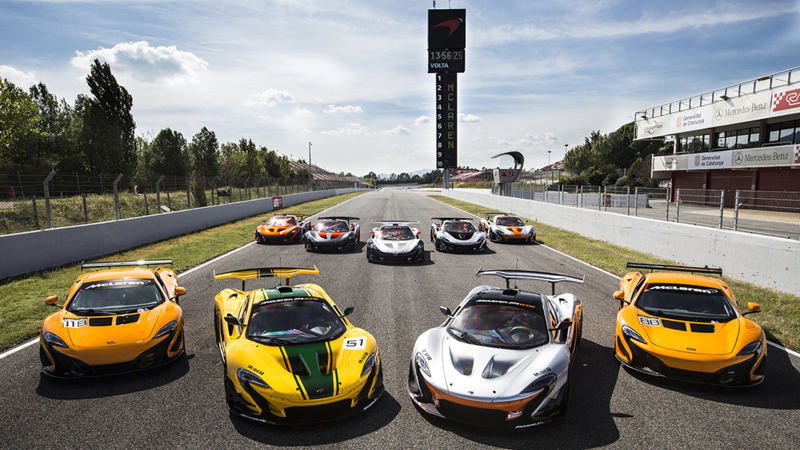 The world’s most exclusive McLaren owner experience has taken to the track for the first time at the Circuit de Catalunya in Spain, as the debut McLaren P1 GTR Driver Program event saw seven examples of the track-only model let loose. Each owner got behind the wheel of the most powerful model ever produced by McLaren, supported by a dedicated pit crew, around the home of Formula 1 in Spain.

The McLaren P1 GTR Driver Program is the ultra-exclusive ownership program, offering specialist driver training, human performance and access to the McLaren racing simulator ahead of on track activity. This program has been designed to prepare each driver mentally and physically to allow them to fully exploit the abilities of the McLaren P1 GTR, which produces 986 hp (1,000PS) and runs on race-proven Pirelli slick tires. The program is completely bespoke, with each individual having a fully-tailored experience, working closely with a support team from McLaren Special Operations (MSO) comprising authentic professionals that have operated within the rarefied world of professional motorsport.

Paul Mackenzie, Executive Director of McLaren Special Operations explained, “The McLaren P1 GTR has been a unique project, where the design and engineering teams were not limited to the restrictions of a road car or a set of race regulations. As a result, the car is a no compromise racer, focused on track performance.”

“The McLaren P1 GTR Driver Program takes this offering to another level, providing owners with a unique experience, designed around each individual. No two drivers are the same, and this program is bespoke to each skill set, with our team of professional driver coaches, engineers and technicians working closely with the drivers, as they would in a top flight motorsport team. This ensures the program is adjusted accordingly to allow for the best to be seen of each driver and each car,” added Mackenzie.

A dedicated team of driver coaches supported the activities on track, led by McLaren Automotive Chief Test Driver, Chris Goodwin. The highly experienced team, each boasting a strong racing career, worked closely with each driver to achieve the best results. Goodwin explained, “The performance of each driver, and the improvements made over the course of the three days on track showed how effective the driver training program in the build up to the event has been, and it proved to be a lot of fun! Every driver was close to the performance they showed on the simulator straight away, highlighting just how realistic the system is, and the bespoke nature of the program, ensured each driver was engaged with the training at their individual levels.”

The effectiveness of the coaching and team support for the drivers was highlighted with two owners proving extremely competitive after recently announced Driver Mentor, Bruno Senna, set a benchmark lap time to work towards.

Goodwin added, “The driver coaches have a fantastic background in a range of sportscar, GT and single seater racing, and sharing this experience was invaluable and a real insight for our customers. As is the case with a race weekend, understanding and analysing data was crucial, and the bespoke nature of the Driver Program worked to significantly improve each driver throughout the three days.”

“This first event gave the drivers the first taste of what the McLaren P1 GTR can really do, and it has got each and every one of them hooked for the rest of the calendar. From here, we will visit some of the most exciting and challenging circuits around the world,” said Goodwin.