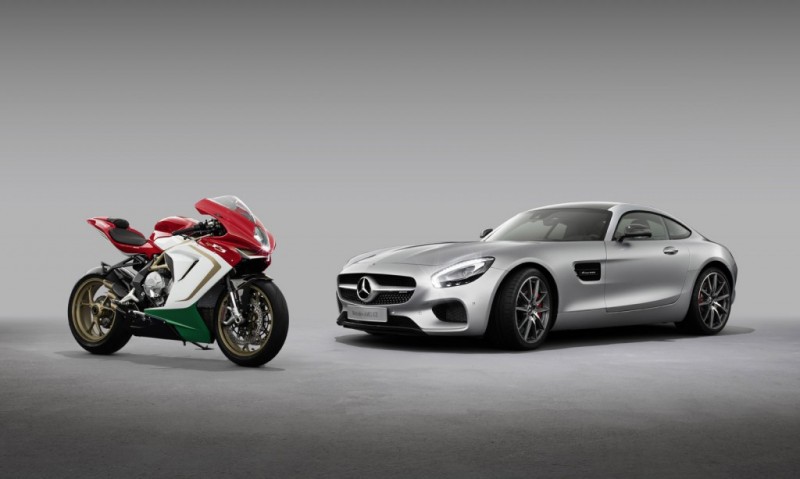 In a deal valued at over $40 million,the Mercedes-AMG arm of Daimler AG will acquire around 25% of the Italian performance motorcycle manufacturer. The move comes after Mercedes ended their collaboration with Ducati, after the latter’s purchase by VW rival Audi. With BMW competing in the motorcycle arena with their BMW Motorrard subsidiary and VW already flexing its Ducati muscle, the move by Mercedes isn’t entirely surprising.

Many are anticipating that the new partnership will result in Mercedes benefiting from MV Augusta’s lightweight, yet high performing three cylinder engines. MV Augusta, in turn, could benefit from the German luxury giant’s marketing and engineering expertise. Also on the table, though not publicly stated, would be an infusion of capital into the MV Augusta brand. With only 260 employees, and smaller sales figures as far as motorcycles go, the tiny MV Augusta could benefit from Mercedes’ significant resources.

Why the sudden obsession with motorcycles is gripping the German automotive manufactures is uncertain, but it doesn’t seem to be stopping anytime soon. VW showcased their new XL Sport sports car concept, using the Ducati V-Twin engine. Many automakers will certainly benefit from the technology and expertise of motorcycle manufacturers in the coming years, as engines become smaller and more efficient. And motorcycle manufacturers will undoubtedly benefit from the superior capital of their larger automotive cousins.

Don’t be entirely surprised if you hear of Mercedes-AMG increasing their stake in MV August, or if you hear of other manufacturers being swooped up by automakers. Of course, it hasn’t escaped our notice that the Italians are the ones being gobbled up. Our only question is, who is going to end up with Motto Guzzi and Aprilia? Porsche? BMW?