I’m not sure if this really qualifies as a sleeper car, but no matter the case, this car has had a lot of cosmetic surgery. On first glance you think it’s a Mercedes but then, upon closer inspection, you see some Lexus influence. There’s a bit of Lamborghini influences as well. However, according to AutoZone’s Facebook page, this is actually a Ford Focus. We’re confused. This owner clearly had a vision but there’s an overall lack of continuity, or something you can’t quite put your finger on. Hey, it’s a Fordcedexus! 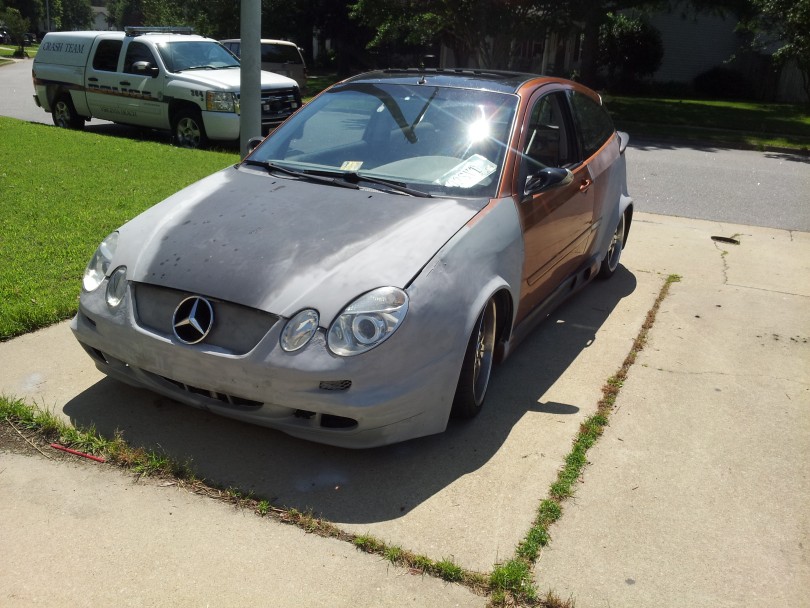 It started off innocently enough as a 2002 Ford Focus SVT. Then the decided to go all chef-Emril on it and kicked it up a notch with Mercedes headlights and Lexus taillights. The vehicle has had the full treatment, from the fender flares to Lambo doors. The owner also chopped the hatch in half to make the Lexus GS400 tail lights fit. Unfortunately, no photo was available of the back side to see how well he made them fit into that “half-hatch.”  We’re guessing there’s a few hundred pounds of bondo involved in the project as well. But, all-and-all, it’s a DIY project worthy of AutoZone’s Facebook page. The page was set up to show off customer’s project cars and there ware some rather unique ones.

Students from Mater Dei High School in Evansville, Ind., took AutoZone’s “Show it off America” honors with a built-from-scratch eco-car. For their efforts, the group received a Duralast 392-piece tool cabinet, valued at $2,500, and will participate in activities this year that showcase the winning vehicle.

The one-person eco-car was built entirely from scratch. It features an aluminum tube frame, carbon fiber body and four-wheel hydraulic disc brakes, and is powered by a 50cc fuel-injected gasoline engine. It took the team of students 10 months to complete their project, often getting parts and advice from their local AutoZone store.

“We’re honored to be recognized by AutoZone for the eco-car our students built,” said Robert Neisen, one of the project advisers. “Up until now, the team depended on community supporters to lend or donate many of the tools needed for projects. Now, thanks to AutoZone, our students can better tackle projects and pursue their automotive passions.”

The small vehicle is able to carry one adult-sized person and a suitcase. The ultra-fuel-efficient car is able to get 849 miles per gallon and set a new record in this year’s Shell Eco-marathon Americas competition, surpassing last year’s efficiency record of 238 miles per gallon.

AutoZone also recognized this year’s contest runner-up and winner of $1,000 cash prize, as well as the remaining finalists, each of whom received an AutoZone gift card that can be used for future DIY projects.

Photographs of the winning car, finalists and other submissions can be found on AutoZone’s Facebook page.