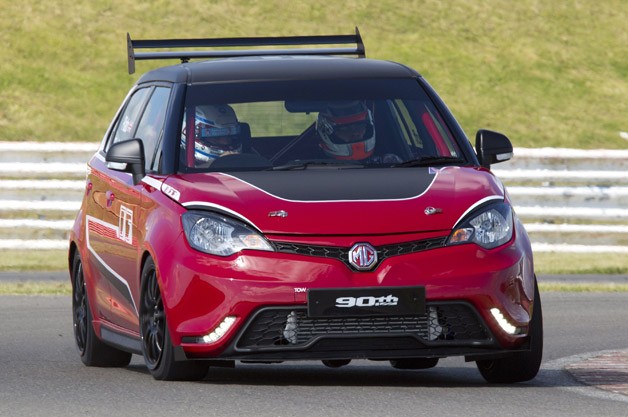 After a long absence from road car and racecar production, the Longbridge based MG is back in the game, at least partially it seems. For the Chinese automaker and owner SAIC, they saw this hiatus as a golden opportunity for resurrection. MG competes in the British Touring Car Championship with a racing version of the MG6 GT driven by two-time series champion and Fifth Gear co-host Jason Plato. And at Silverstone last weekend, it revealed the concept racer you see pictured above.

But this isn’t your average MG.

Dubbed the MG3 Trophy Championship concept, it’s based on the company’s entry-level MG3 hatchback, but literally puts it to shame in every category.

Its 1.5-liter four-cylinder engine has been completely retuned and revamped from 105 horsepower and 100 pound-feet of torque, to nearly double that boasting a 204 BHP 1.5T VTi Tech engine at 192 lb-ft. But the engineers at SAIC’s European Design and Technical Centre didn’t stop there.

They’ve also made some cosmetic changes. They cut some excess weight,  fitted a limited-slip differential, added a fully adjustable suspension and topped it off with front and rear spoilers.

MG launched their MG3 supermini in September 2013, providing  a fun to drive, fun to own, personalized experience with over one million customization options and class leading chassis.