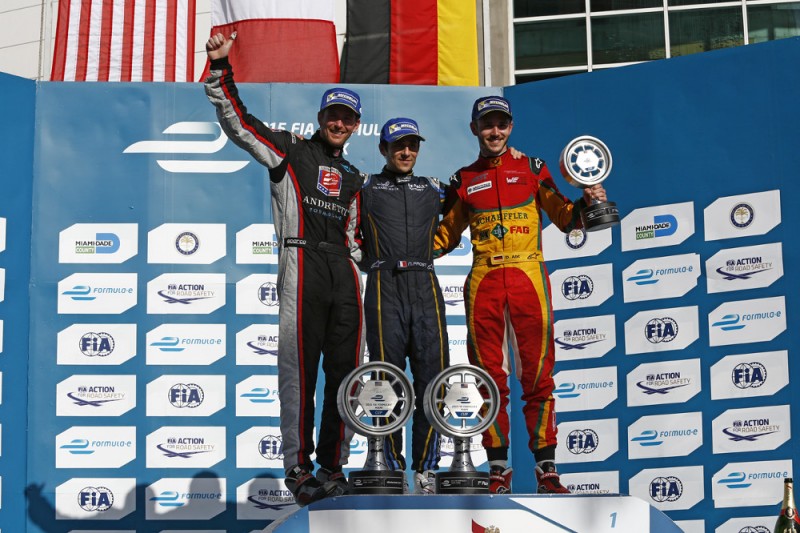 It was a day that got off to a nerve-wracking start and ended with plenty of excitement. The first Formula E race to be held in the USA saw Nico Prost triumph at the end of a duel that had the 20,000-strong crowd spellbound right up to the very end. The streets of Miami were packed, with tickets everywhere sold out, while millions of fans around the world watching.

Prost is the fifth different winner in this maiden Formula E season: his name can be added to the list of Lucas Di Grassi (Beijing,) Sam Bird (Putrajaya,) Sebastien Buemi (Punta del Este) and Antonio Felix da Costa (Buenos Aires.) Making the Frenchman’s day even more special was the podium ceremony: handing him his trophy was a “rival” in the form of Virgin Group founder, Sir Richard Branson, while up there to take the team award was the victor’s father Alain.

A delay in getting the track completed created some early anxiety and meant that the two free practice sessions were delayed and run as one 30-minute session, but once that was sorted out, it was time for the show to go on. In qualifying, another Frenchman, Jean-Eric Vergne took the top spot he led the pack away into what would be a thrilling 39-lap race.

A major contender in the Miami ePrix was the local hero, Scott Speed. The American, driving for the Andretti team, was making his debut in the series.  After a difficult qualifying saw him start from the fifth row, he staged a great climb up the order, thanks to a well executed strategy of energy management and some brave overtakes. First he got past Daniel Abt and then, he chased Prost right down to the final meter of the very last lap.

In the early stages all eyes were on a close duel between pole-man Vergne and Sam Bird, with Prost tailing the English Virgin driver. As the first stint was coming to an end, Bird made his move, overtaking Vergne with a great pass at Turn 5, after which the Frenchman opted to pit immediately. However, the run of pit stops was the undoing of two of the front runners, who found themselves down in the pack, with Abt taking the lead, shadowed by Prost and championship leader di Grassi.

With six laps to go, the two Audi Sport ABT drivers began to struggle compared to their rivals, who had more energy available: first Speed passed Di Grassi (lap 36) and then it was Abt who had to let Prost and the American pass on the penultimate lap. However, the German managed to salvage third place and thus make it to the podium for the first time this season. However, the final stages did not work out so well for his team-mate, who could only pick up the 2 points that come with ninth place.

Di Grassi thus loses the lead of the championship, handing it to today’s race winner, now out in front on 67 points, seven clear of the Brazilian. Bird, who crossed the line eighth, is now third in the general classification (52 points,) while Buemi, who failed to score today, is fourth on 43. Moving further ahead in the Team classification is e.dams-Renault: the French team now has 31 points in hand over Audi Sport ABT, which has Andretti hot on its heels, just one point behind.

There was a noteworthy performance from another newcomer, Frenchman Loïc Duval who, having started from the back row, finished seventh, while Nelson Piquet Jr. was fifth at the flag and took the two points that go with setting the fastest race lap.

After the excitement of Miami, Formula E continues its American journey. The sixth ePrix of the season will take place on 4 April at Long Beach, California.