Distinguished world-class motorcycle racer, Micky Dymond, will be racing in the 2014 Sturgis Supermoto race. The former AMA 125cc Motocross Champion, AMA Supermoto Unlimited Champion and Baja 1000 winner is sure to bring some speed to the streets of Sturgis. 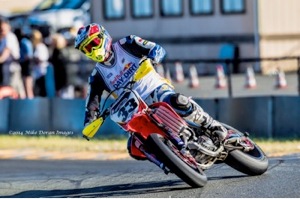 Micky will be competing in the Sturgis Supermoto Race is September 12-14, 2014 on the downtown streets of Sturgis, SD. The event is free to the public. Racing starts on Friday, September 12th at 6pm with the Sturgis Charity Race at the Knuckle Saloon. AMA Pro Supermoto racing will start at 9:30 am on Saturday, September 13th and continue through Sunday afternoon. For a complete schedule of events visit www.amanationalsupermoto.com.
“Micky Dymond’s resume is very impressive. My department has been talking with him on a number of items. Not only is Micky an avid motorcycle and bicycle racer, he is the Creative Director of the Nuclear Cowboyz Freestyle Motocross Tour and has some great ideas for the 75th Sturgis Motorcycle Rally. He is also part of the cross over demographics for motorcycle and bicyclist that the City of Sturgis feels is very important to our tourism. We are truly excited to work with someone of his caliber,” said Brenda Vasknetz, Director of the City of Sturgis Rally and Events Department.
Most recently Mickey organized, competed and won the famed 3,000 mile endurance cross country road cycle race, Race Across America (RAAM), with seven-time U.S. National Time Trial Champion and Tour de France competitor, Dave Zabriskie, BMX Champion and 24-times X Games medalist, Dave Mirra, and finally Superbike Champion, Supermoto Champion and professional mountain bike racer, Ben Bostrom.
For more information: www.sturgissupemoto.com.
Show Full Article