The Fox Cities British Car Club (www.foxbrits.com) is a little bit different than most car clubs that meet at a restaurant or in a shop. The FCBCC has its own shop. It’s part of the FCBCC clubhouse in Oshkosh, Wisconsin. The facility has indoor and outdoor car storage areas, a workshop area with two lifts and tools, a meeting room for club functions and tech sessions, a library, a kitchen and even the members-only English-themed “Busted-Knuckles” pub.

FCBCC was organized by Jim Marks, who developed a passion for British cars just shortly before forming it. Marks had to travel more than 100 miles to Madison, Wisconsin to find a British car club back then. When he complained, someone told him to start his own club – so he did. Marks is no longer in charge, but before he left, FCBCC “adopted” a former motorcycle dealership that Marks and a partner purchased. They setup a car-storage operation as a business and leased room to the club to offset the expenses of maintaining a clubhouse.

The club pays only $50 a month to use the facility for meetings, seminars and functions like tech sessions. If individual members wish to store cars, they can choose from several plans that cover either heated or non-heated indoor storage. The most expensive gives British car  owners their own key so they can use the shop or take their car out at any time. Members who don’t store cars, can pay a small hourly fee to use the workshop facility, tools and lifts. 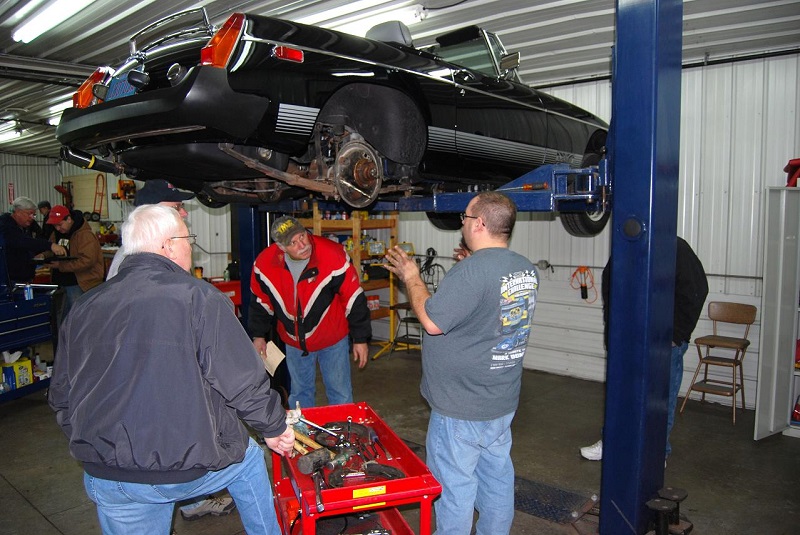 Among the club’s 160 members are a number of very skilled mechanics and restorers who seem quite willing to help other members fix their cars. Currently under restoration in the clubhouse are a Triumph TR-3, a Lotus and a Jaguar saloon. Several other members are involved in engine rebuilding projects.

FCBCC differs from other car clubs in other ways as well. The club does not publish a newsletter or magazine. All communications are done by the Internet. The club Website www.foxbrits.com lists members only by their email “handles” and includes sections for news and events, technical discussions and cars or parts for sale. There is also a forum where members can share their news, views and expertise. All year long, the members participate in various activities from impromptu weekend tours to bus trips to the Chicago Auto Show.

Despite making headlines with their clubhouse, the FCBCC members are really more interested in working on their cars together and driving them in the warm weather. The cars stored inside make the clubhouse look very much like the world-famous Oshkosh Air Adventure Museum—which is located just a mile away.Who knows? Maybe someday there will be a second transportation museum in Oshkosh. If so, it will be filled with lots of classic British cars.