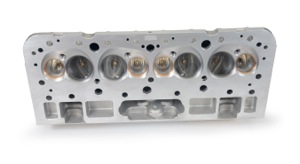 Mike Androwick of Mike’s Racing Heads has been a cylinder head porter all his life. In NHRA Pro Stock he worked alongside Richard Maskin, Bob Glidden and Larry Morgan. In big-block Modified oval track racing series in the northeast, he provided 60 sets of racing heads, winning the 2013 championship with Brett Hearn. For 2014 drag racing he has prepared a new small-block innovation based on the Edelbrock 15-degree cylinder head.

Derived from the Edelbrock 15-degree Pro-Port head (p/n 77549), this head features 300cc intake volume runners and is developed for engine displacements of 400 to 434cu. in. Considering its inline-valve configuration, the peak flow numbers are impressive as the intake tracts generate 397cfm and exhausts 273cfm. Inlet and exhaust valve sizes are 2.180in. and 1.625in. respectively, which seat on a 50-degree angle.