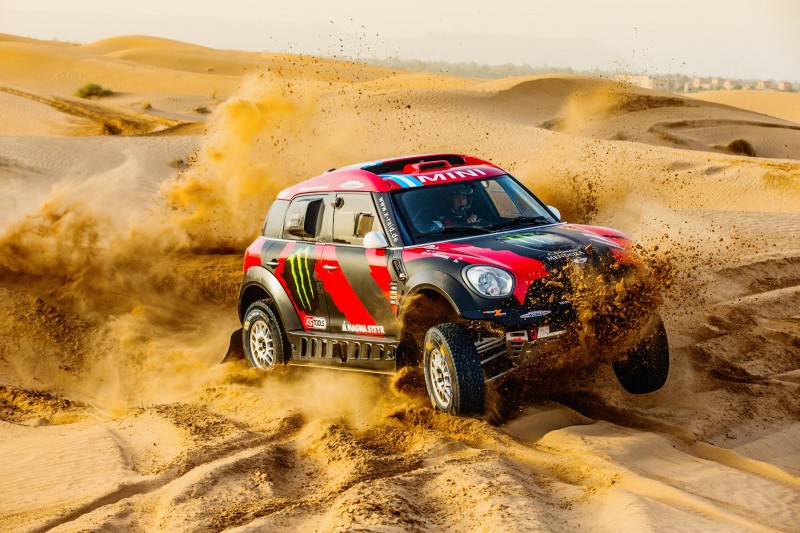 Less than two months ahead of the start of the 2015 Dakar Rally (3-17 January) X-raid, supported by MINI, has revealed its line-up for the 37th edition of the world’s most famous long-distance rally. A total of eight MINI ALL4 Racing with driver crews from ten countries will take on the ultimate motorsport adventure of the Dakar Rally. Defending Dakar champions Joan “Nani” Roma (ES) and co-driver Michel Périn (FR) will lead the Monster Energy Rally Raid Team while the experienced driver pairings Orlando Terranova (AR)/Bernardo “Ronnie” Graue (AR) and Krzysztof Holowczyc/Xavier Panseri (PL/FR) complete the line-up. There will also be five customer driver pairings in MINI ALL4 Racing cars built by the German-based X-raid GmbH.

For the MINI brand the 2015 Dakar Rally is the next chapter of a unique success story which culminated in three consecutive Dakar victories as well as three titles in a row in the FIA World Cup for Cross-Country Rallies, both from 2012 to 2014. The 2015 Dakar promises to be the most demanding edition since the Dakar moved from Africa to South America in 2009.

“With its extremely demanding route and highly challenging racing conditions the Dakar Rally is not only a thrilling off-road event to millions of motorsport fans. It is also the ultimate test for drivers, teams and cars alike,” says Jochen Goller, Senior Vice President MINI. “Even with the most outstanding preparation, the Dakar remains a tremendous adventure with unforeseeable challenges and highly demanding tasks that all participants will have to master in order to succeed. With this in mind, we are more than pleased to enter the 2015 Dakar Rally with a professional, experienced team in our strategic partners of the X-raid Team, a highly competitive driver line-up and a proven winner in the MINI ALL4 Racing. For the past three Dakar Rallies the MINI ALL4 Racing has been the epitome of endurance, performance, reliability, agility and – last but not least – success. Further to this, with millions of fans around the globe watching the 2015 Dakar Rally, the immense international awareness provides the perfect stage to extend the MINI brand’s global reach.”

With several new and reinstated competitive stages the Dakar will be another adventurous trip for both drivers and teams. From merciless gravel sections to the breathtaking heights of the Andes, from the sweltering heat of the Atacama desert to the tricky soft dunes the competitors are often making their way into the unknown, facing unforeseeable obstacles. This is what makes the Dakar Rally the ultimate motorsport challenge. Starting out in Buenos Aires (AR) and traveling in a great loop across the South American continent through Chile and Bolivia back to Argentina, more than 9,000 challenging kilometres is the task at hand for all competitors.

In 2015, Nani Roma and his experienced co-driver Michel Périn (FR), a four-time Dakar winner himself, are aiming to defend their title in their black and green MINI ALL4 Racing. “Winning the 2014 Dakar Rally in the MINI ALL4 Racing was very special to me because it came exactly ten years after my first Dakar victory,” says Roma who also won the 2004 Dakar Rally on a motorcycle. “The MINI ALL4 Racing has been strong from start to finish. It is the way we know the MINI to be: powerful, reliable and fast. It has been a key factor in making my most recent Dakar victory possible. It will be a pleasure to be back in the MINI as I am looking forward to the 2015 Dakar Rally ready to defend my title.”

Terranova who finished the 2014 Dakar fifth overall will be in the red and black MINI ALL4 Racing. “My goal, of course, is to win the Dakar but also to be the first competitor under the age of 40 to win it. It is a big challenge but the MINI ALL4 Racing is very strong. So I am confident that I can successfully reach my goals.” Holowczyc, winner of the 2013 FIA World Cup for Cross-Country Rallies in the MINI ALL4 Racing will be driving the blue and black MINI ALL4 Racing. Says Holowczyc: “I will do everything to be on the podium when the Dakar ends. The route will be much harder than in 2014, so the upcoming Dakar will be a new challenge which I am looking forward to accept.”

No less than five additional X-raid-built MINI ALL4 Racing driven by customer crews round off the MINI lineup at the 2015 Dakar Rally. 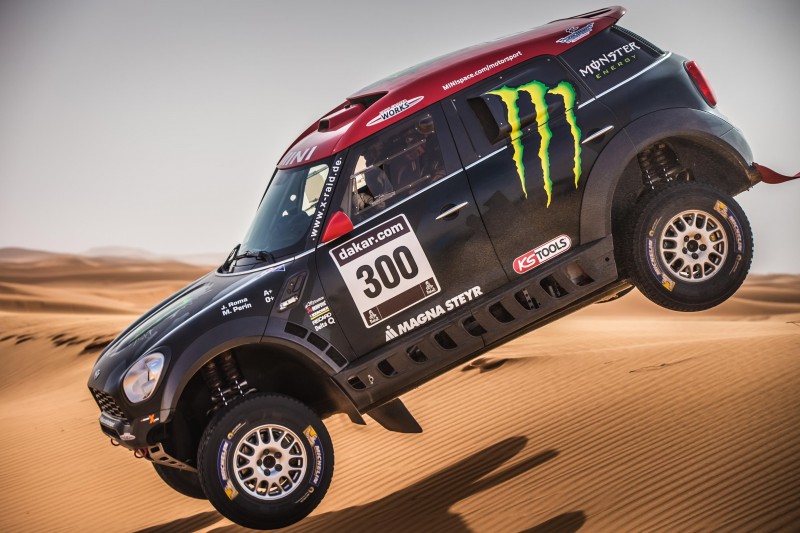