MOMO NGT Motorsport has announced its partnership with Safecraft Safety Equipment in the 2017 Pirelli World Challenge Sprint-X series. The stand-alone championship uses an extended sprint format, with the 60min races requiring compulsory driver changes. It is designed to bring the excitement of existing sprint race formats with the added intensity of pit stops to add a greater tactical element. 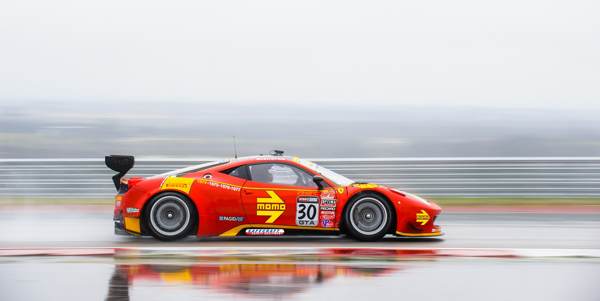 MOMO will be entering a Ferrari 458 GT3 Italia driven by company chairman, Henrique Cisneros and Safecraft’s Tyler McQuarrie, one of the best multi-purpose drivers in the country.  Henrique previously finished second in the Pirelli World Challenge GT AM class in 2015 and is looking to take the crown this year with Tyler.

“The partnership is a winning combination all around,” said Pat O’Keefe, president and CEO of Safecraft. “Safecraft and MOMO are recognized industry leaders of excellence who have teamed up behind the wheel with Henrique and Tyler, each with impressive driving records, immediately making them a pre-race favorite.”

Henrique took a sabbatical last year to focus on the aggressive expansion of MOMO. He oversaw the acquisition of Weld Racing, ADV.1 Wheels, Driven Motorsports and Tikore, to name a few. Now he is returning to the heat of competition in the same race-winning Ferrari. New for 2017 is the partnership with Safecraft Safety Equipment, the leading fire suppression manufacturer in the world.

Henrique will share driving duties with Tyler McQuarrie, who is continuing Safecraft’s “Race Everything” campaign. He will join Henrique for the first round of the Sprint-X GT championship at Virginia International Raceway this weekend. “I’ve been racing pretty much everything on four wheels as part of the Race Everything campaign with Safecraft Safety Equipment, and I’m going back to my roots with a return to World Challenge competition this weekend,” said Tyler. “I’m very excited to be partnering with Henrique Cisneros in the MOMO Ferrari 458 GT3 and can’t think of a better group of people to make that return with than MOMO NGT Motorsport.”

The 37 year-old California resident began racing karts from the age of 14 and, true to Safecraft’s campaign, where Safecraft systems can be used in “everything you can race”, Tyler has raced everything – from single-seaters to late-model NASCAR, touring cars and drift cars, Time Attack, Stadium Super Truck, Baja 1000, Trans Am and Monster Trucks. With this level of experience and versatility, Tyler is the perfect candidate for the MOMO Ferrari 458 GT3 Italia.

“I’m extremely excited to be back in the racecar after a year focusing on the growth of the MOMO Automotive Group,” said Henrique ahead of the VIR race. “I’m looking forward to sharing the car with Tyler as we attempt to win the GT-A class in the Sprint-X championship this year. The high-speed, demanding races are a great place to prove the value of great team work and outstanding equipment, such as MOMO and Safecraft’s fire suppression system fitted to the car.”