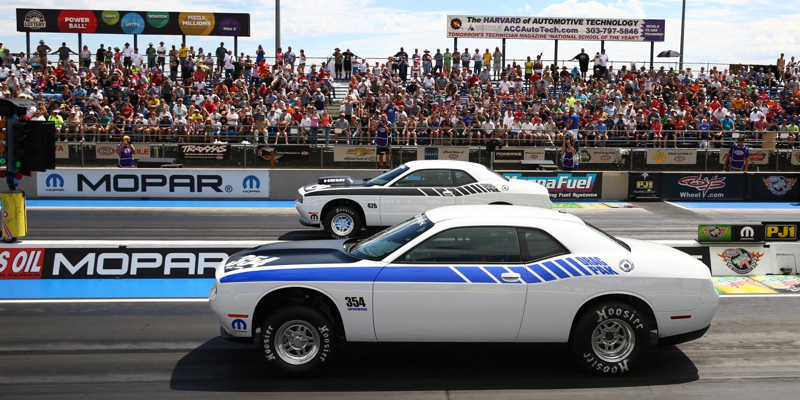 The Mopar brand is adding horsepower to its support of amateur, non-professional NHRA Sportsman racers with a slate of new programs and resources for the 2017 season. Initiatives include factory-backing for select Mopar and Dodge NHRA Sportsman teams, a new “Magneti Marelli Offered by Mopar Drag Pak Rewards” program, technical at-track assistance for grassroots racers and increased outreach and communication with Sportsman competitors.

Also new for next season, FCA US LLC engineers will attend each of the 24 NHRA national events to provide all Mopar-powered NHRA Sportsman racers with technical advice and guidance. Unlike professional drivers in the NHRA Mello Yello Drag Racing Series, amateur NHRA Sportsman racers often compete with little or no sponsorship, supporting their weekends at the dragstrip via their own funds.

“Amateur Sportsman racers fuel our brand’s involvement in NHRA competition,” said Bill Harry, Head of Marketing, Mopar. “In 2017, we’re backing up those words with new initiatives that prove our commitment to our most dedicated and passionate brand ambassadors. We’re also very excited to work more closely with the Dodge brand in providing select factory-backed support for Mopar Dodge Challenger Drag Pak drivers. This enhanced commitment, combined with our championship-winning relationship with Don Schumacher Racing in Funny Car and Top Fuel, demonstrates that we are focused on NHRA involvement that makes the most sense for the Mopar brand.”

In addition to teaming with Mopar in factory support of a trio of Dodge Challenger Drag Pak machines, Dodge will also introduce a new brand display, located next to the Mopar trailer on NHRA Manufacturers Midway, at 15 of 24 NHRA national events.

“The Dodge brand has a long, proud tradition in NHRA drag racing dating back to the early 1960s,” said Tim Kuniskis, Head of Passenger Cars, Dodge, SRT, Chrysler and Fiat, FCA North America. “We look forward to extending that tradition by joining forces with Mopar to provide support for select Dodge Challenger Drag Pak NHRA Sportsman teams for the 2017 season. Our new Dodge display at 15 NHRA events will also give us a great opportunity to connect with the performance-loving enthusiasts who truly embrace and identify with our brand.”

One Mopar Dodge Challenger Drag Pak will be steered by Michigan native and team owner Welch. The seat of the second Joe Welch Racing Drag Pak machine will be reserved for a Mopar and Dodge-sponsored, nitro-fueled star from the NHRA Mello Yello Drag Racing Series. The driver, who will compete at select events, will be announced in the near future.

The third Mopar and Dodge-backed entry will boast a championship pedigree — the elite team of owner Jeff Teuton and driver Kevin Helms. The duo, who partnered to capture the 2015 NHRA Stock Eliminator World Championship in a Teuton-owned Drag Pak, will seek to reclaim that title-winning magic in a supercharged, official Mopar Dodge Challenger Drag Pak entry.

The three factory-backed Drag Pak cars will also be used in a developmental capacity, yielding information and data to help grow the Mopar Dodge Challenger Drag Pak program, which has produced 260 factory-built race cars since it was introduced in late 2008.

Also, returning for 2017 are the Mopar HEMI Challenge and the Mopar Sportsman Appreciation Night, two programs that have become mainstays of the premier event on the NHRA circuit, the U.S. Nationals.

Back at Lucas Oil Raceway at Indianapolis for the 17th year in 2017, the Mopar HEMI Challenge showcases SS/AH Sportsman class competitors in head-to-head battle on the quarter-mile. The event features the classic muscle cars that contributed to the brand’s legendary reputation and success at the drag strip. The 1968 Dodge Dart and Plymouth Barracuda “package cars,” factory-built for the strip, were precursors to the Mopar Dodge Challenger Drag Pak vehicles that compete today in NHRA Stock Eliminator, Factory Stock Showdown and Super Stock.

The Tom Hoover Sportsman Challenge will continue to recognize the outstanding Mopar Sportsman racer who accumulates the most points over a full season while competing in Stock or Super Stock Class racing. The award is named after legendary racer and engineer Tom Hoover, acknowledged as the father of the 426 Gen II HEMI engine. The annual winner receives a cash award and a custom trophy.