Morgan Motor Company has announced a special Run For The Hills (RFTH) event that will take place at the Malvern Three Counties Showground on August 26-27, 2017. 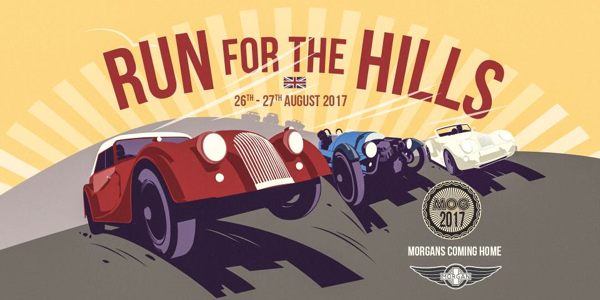 Held in association with the Morgan Sports Car Club, RFTH will see thousands of Morgans return to their birthplace for two days and nights of live entertainment, Morgan themed events, trade stands and much more.

Starting with an open house tour of the Morgan factory, visitors will explore the history of the family-owned British marque, from the first 3-wheeler models built in 1909 by H.F.S. Morgan, through over a century of innovation and craftsmanship to the modern high-performance Aero range.

RFTH promises to be the biggest gathering of Morgans since the company celebrated its centenary in 2009. The collection of thousands of Morgans will gather at the Malvern Three Counties Showground, followed by a Gala Dinner and live entertainment, just a few miles from the Pickersleigh Road home of the iconic British coachbuilder.

The perfect end to a fantastic weekend will see the English Symphony Orchestra headlining The Morgan Prom Spectacular with a firework finale, set against the backdrop of the Malvern Hills.

Steve Morris, Managing Director of Morgan Motor Company, said: “Run For The Hills is a wonderful opportunity to celebrate everything that people love about Morgan. Whether you have a Morgan in your driveway or just a poster on your wall, Run For The Hills is for all enthusiasts. Every Morgan ever produced was crafted in Malvern and what better way to celebrate over 108 years of innovation than by bringing the cars home. We look forward to welcoming 1000s of cars back to the hills that have echoed to the sound of every Morgan for over 100 years.”