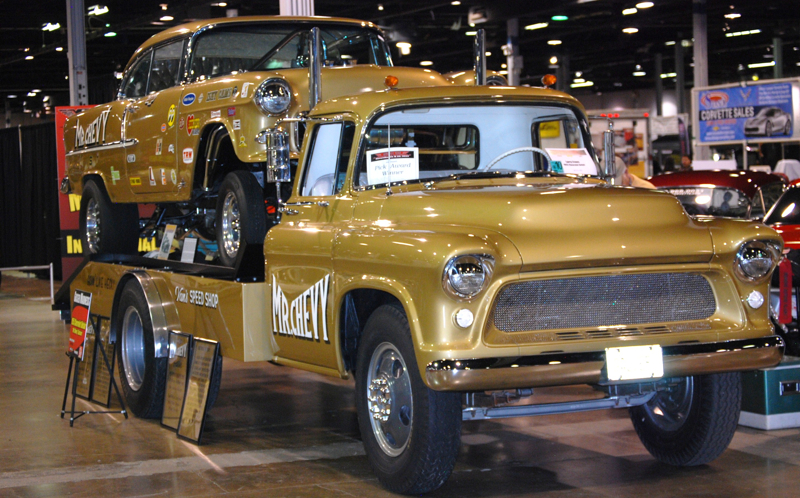 Frees recently published his own book about the history of the two Chevrolets. It tells the story of how the race car hauler was in a wreck back in the 1970s, how both survived and how the V8 Speed and Resto Shop refurbished the vehicles.

A local drag racer named Van Heck made the two vehicles famous in the 1970s. Heck was known as “Mr Chevy.” He was as big on showmanship as he was on craftsmanship. Both the car and the truck featured incredible detailing, from their Anniversary Gold exterior color to the truck’s custom off-white upholstery. The car not only looked great—it could race down the quarter mile in the low 10 seconds bracket. Racing fans loved Heck and his Chevy combo.

One day in 1976, Heck was racing the car when one of the uinersal joints broke and flew right through the rocker panel. He loaded the slightly damaged car onto the truck and headed home. During that trip, he was involved in a collision with a car operated by a man who was drunk. The passenger car wasn’t damaged in the accident, but the truck was and he parked it for 30 years.

When Heck passed away in 2006, Larry Frees bought the as-raced car and the still damaged truck. He performed some restoration work on the truck by himself and then had the V8 Speed & Resto Shop do the sheet metal work and gold paint. When the job was done, Frees started taking the vehicles to car shows, which always drew big crowds everywhere.