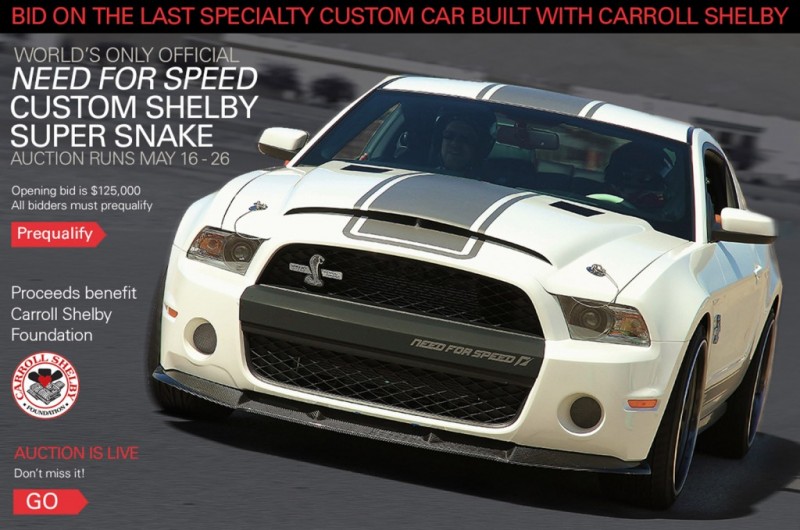 Two important developments in the Mustang world have surfaced recently. The first is the announcement that the last car which was worked on by Carroll Shelby has gone up for auction.

In 2011, video game publisher Electronic Arts collaborated with Carroll Shelby and Shelby American to produce a one of a kind Ford  Mustang GT500 Super Snake to promote their Need for Speed game, with the understanding that the car would then be sold and the proceeds given to benefit the Carroll Shelby Foundation. The car would also be featured on the cover of Need for Speed, which was meant to heighten the auction appeal.

After Shelby died just a couple of months after the completion of the car, which ended up being his last project, the auction was postponed, and the car placed placed in a sort of limbo.

The car was among Shelby’s proudest accomplishments and resided temporarily in his personal collection when he died. Audio manufacturer JVC used the car in a photo shoot and subsequently installed a state of the art stereo system to go along with many of Shelby’s technical upgrades.

The stock V8 has been swapped out for a 5.4 liter supercharged V8 that is good for 750 horsepower. A 75mm throttle body, aluminum drive-shaft, 20″ HRE performance wheels, a billet short-throw shifter for the six speed manual transmission, six-piston front brake calipers and ducts for additional cooling, and a custom fiberglass hood are some of the additional modifications bestowed upon the car by Shelby in his final months.

The car is up for auction currently, with the eBay listing and the auction itself expiring on May 26. All proceeds will go to the Carroll Shelby Foundation charity.

Elsewhere in the Mustang world, is a car that is perhaps on par with or even surpasses Shelby’s last creation. Doing the tradition of the Mustang proud, Modern Muscle Design partnered with Chip Foose to create a one of a kind Mustang GT for one lucky Mustang enthusiast. The car, pictured below, will be awarded to the winner of the sweepstakes hosted by AmericanMuscle for the Summer AmericanMuscle Mustang Show. 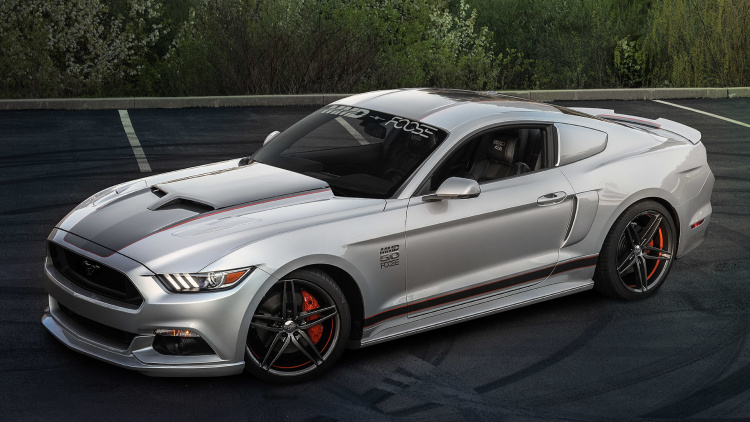 The Foose Mustang by MMD features the Mustang GT’s 5.0 liter Coyote V8 with the addition of a modified 2.9-liter, twin-scroll Whipple supercharger from Bama Performance. The engine sends 810 horsepower to the carbon fiber drive-shaft. In addition to upgraded rocker panels, hood, side scoops, and a chin spoiler, the car is also equipped with Vogtland Sport Suspension and a Magnaflow Competition cat-back exhaust.

The contest to win the car can be entered here at the AmericanMuscle site.