Cutting-edge technology is not just for the race cars.

Toyota’s new Air Titan, the cutting-edge track-drying technology, made its race weekend debut at Martinsville Speedway today. Air Titan 2.0 is a more compact, more nimble and more environmentally friendly version of its innovative predecessor – one that since its introduction in February 2013 has rescued multiple races, including this year’s Daytona 500.

Air Titan 2.0 signals a major step forward in NASCAR’s innovation cycle. It replaces the bulky support vehicles required by Air Titan 1.0 with a single, self-contained unit that’s perched on the bed of a Toyota Tundra. By addressing the size of the power source, NASCAR now has the ability to deploy up to 21 units in Toyota Tundras at larger venues and operate more efficiently on smaller tracks.

The Air Titan 2.0 more than triples the blade capacity of the original version and deliver 2.6 times more air volume at a speed of 568 mph, while raising the air temperature by 70 degrees over ambient. With the combination of water removal and accelerated evaporation, the ultimate goal is to reduce track-drying time by 80 percent. 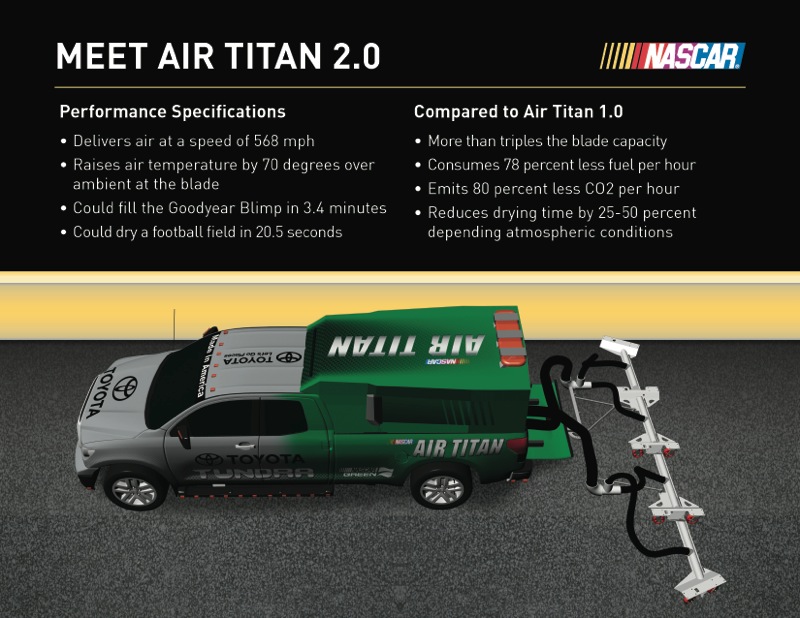 In 2012, Brian France, NASCAR chairman and CEO, challenged the NASCAR R&D Center to develop a system to significantly reduce track-drying time to enhance the fan experience. NASCAR R&D responded to France’s vision and rolled out the initial Air Titan configuration during Daytona Speedweeks in 2013.