I have a close affinity to “Buddy” Baker since kids in school often asked if he was my dad because of our last names.  It’s only the fifth most common last name in the country, but kids will be kids. While my dad was a racer, too, and even competed on one of Buddy’s most successful tracks – Talladega, which Buddy won four times – he wasn’t that Baker.

Buddy was a nickname. His real name was Elzie Wylie Baker Jr., however, no one ever called him by his real name. He won the 1980 Daytona 500, and after he hung up his helmet for good, he switched to the commentator booth and had as much success there as he did behind the wheel. Buddy died Monday morning after a battle with lung cancer. He was 74.

At 6 feet 6 inches tall, Buddy was often called the “Gentle Giant,” though the nickname “Leadfoot” was more apropos due to the blistering speeds he often achieved during his 33-year career. 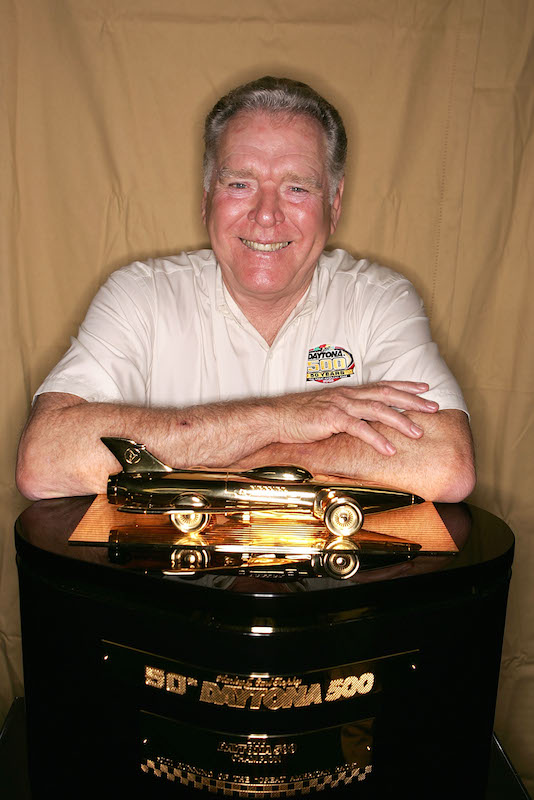 In 1970, Buddy became the first driver to eclipse the 200-mph mark on a closed course while testing at Talladega Superspeedway. Although he didn’t win at the 2.66-mile superspeedway that year, he did win it four times throughout his career.

A race commentator and radio host during a lengthy and prolific post-racing career, the Charlotte, North Carolina native’s biggest win came in the 1980 Daytona 500. He finished with an average race speed of 177.602 mph – a track record that still stands. His car was an Oldsmobile, and it was so fast that during race week someone nicknamed it “The Gray Ghost.” Other drivers told NASCAR officials that Baker’s Olds, which had a black and silvery-gray paint scheme, was so speedy that it was blending into the asphalt as Buddy overtook them. Cup director Dick Beaty consequently took the unprecedented step of ordering Day-Glo pink strips taped to the car’s grille.

“Many of today’s fans may know Buddy Baker as one of the greatest storytellers in the sport’s history, a unique skill that endeared him to millions,” said NASCAR Chairman and CEO Brian France. “But those who witnessed his racing talent recognized Buddy as a fast and fierce competitor, setting speed records and winning on NASCAR’s biggest stages. It is that dual role that made Buddy an absolute treasure who will be missed dearly.”

Baker, son of NASCAR Hall of Famer Buck Baker, accumulated 19 wins in the premier series, including a victory in the 1970 Southern 500 at Darlington Raceway where he lapped the rest of the field. In 1972-73, Baker became the first driver to win consecutive World 600s. He also won the inaugural preseason event now known as the Sprint Unlimited in 1979. He was named one of NASCAR’s 50 Greatest Drivers in 1998, and in 2014 was first nominated for inclusion into the NASCAR Hall of Fame.

After retiring in 1992, Baker made a successful transition to the television booth as a commentator for The Nashville Network and CBS. He most recently served as a radio co-host on “Late Shift” and “Tradin’ Paint” for SiriusXM NASCAR Radio.

Our thoughts and prayers are with the family of Buddy Baker. Buddy passed away this morning at the age of 74. pic.twitter.com/SglYrzsKK2

“Do not shed a tear. Give a smile when you say my name. I’m not saying goodbye. Just talk to you later.” –Buddy Baker pic.twitter.com/dMap0ByMkP

Good Morning America, twitterville, race fans, sad day for the racing community, #buddybaker has gone to be with the Lord, RIP #GentleGiant

Rest in peace, Buddy Baker. Thanks for the memories both on & off the track…Godspeed. #RIPBuddy pic.twitter.com/BmwIybw7i4