The Charlotte Motor Speedway Media Tour Presented by Technocom is unlike any other in major sports. Charlotte Motor Speedway (CMS) uses the proximity of most of the teams being located in the Charlotte area to immerse over 250 journalists right smack dab into NASCAR. They come from literally from all over the world and cram intense days of working up close and personal with drivers, owners, builders and NASCAR decision makers. This year’s edition was held inside the NASCAR Hall of Fame so its pages of history makes for the perfect backdrop to talk about the upcoming season. 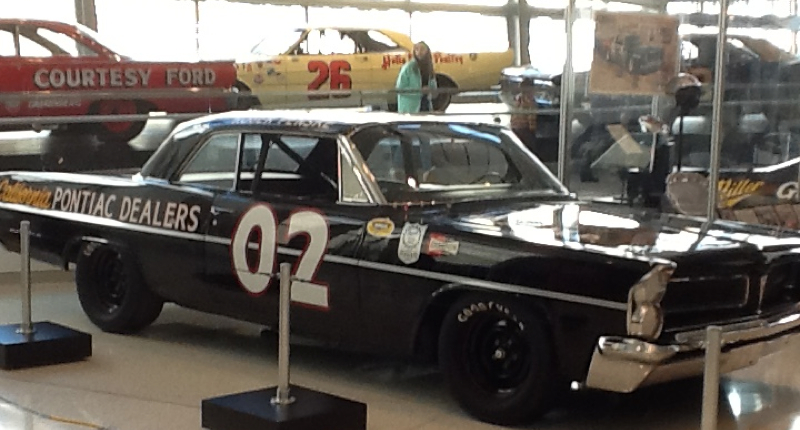 Day one of this 34th annual Media Tour began with the traditional visit with NASCAR and its own State of the Union report. Boss man, Brian France, only briefly talked about the new, reduced downforce rules that will be in effect this year. He wanted to emphasize what good shape the brand is in and talked about tracks seeing a “nice and sizable” increase in attendance, the new, 10 year TV packages with FOX and NBC and their best TV audience in a decade. NASCAR is working on the complex ownership structure, even having meetings in the past week and promises the finished product will be a “historic first.” NASCAR also rolled out their new Chase versions for Xfinity and Camping World divisions. France said using this format will teach the up and coming teams the importance of winning. With smaller fields running those races, their respective Chase events will be smaller, too. They also announced there will be more use of SAFER barriers at tracks, talks with potential series sponsors are going well and racing is in a much better position it was than the past ten years.

The new aero rules were created to actually reduce downforce, putting more of the handling back in the driver’s hands and have already proven to make racing more competitive. Goodyear and the three manufacturers have helped with this and racing looks to be more, well, racey. Atlanta Motor Speedway is the track where the first race with the new downforce rules will run. Atlanta is pretty historic as it’s the track with the most 500 mile races run. Their Folds of Honor QuikTrip 500 will be 101st such race. And speaking of tracks,the $400 million Daytona Rising project is done and will debut during Speedweeks in February.

Starting off Toyota Day was the top Toyota team, Joe Gibbs Racing, now starting their 25th year in NASCAR. 2015 Sprint Cup Champion, Kyle Busch is the comeback story of the year and plans on defending that title. He had all of his leg’s ‘hardware’ removed off season and is hitting rehab hard. JGR will have its four Camrys racing and looks to be tough to beat. Another Toyota team is Furniture Row Racing, having switched from Richard Childress Racing Chevy SS cars to JGR Camrys. They went from their worst year to their best last year and will be using momentum to keep things moving.

FOX Sports introduced their newest on-air personality, recently retired, Jeff Gordon. His addition to the booth makes it two drivers, one crew chief and Mike Joy to be the referee each week.

Day two on the Charlotte Motor Speedway Media Tour Presented by Technocom was all about the Fords. We started off with The King, Richard Petty, and his team that is not as rebuilding as much as growing. For one, they will be making their own chassis, not a small step by any means. Their corporate partners from last season have all reupped, with some increasing their programs. Look for The King’s two cars to see more wins. The second Petty car has been renumbered to the family’s 44 and will have new driver, Brian Scott at the wheel.

Next up was Roush Fenway Racing and along with their association with Front Row Motorsports, will have six drivers racing. Jack Roush is starting his 29th year in NASCAR with renewed interest and pointed out how Ford typically has increased its support in NASCAR threefold. They talked about the aero package that was developed last year at two races where all the Fords seemed to run strong.

Then, it was off to the Ford Tech Center and the debut of the 2017 Fusions – both street and race versions. How important is this tour to Ford? They displayed that street Fusion in only its second ever appearance. They don’t have to point out how their Fusion is the NASCAR racer that is closest in appearance to its street brothers – a fact not lost on Ford buyers. In a complete reversal, the Tech Center’s state of the art simulator went from being used for race cars to also helping production cars.

We visited with the famous Wood Brothers next, now starting their 66th year in NASCAR. They’re hitting ’16 in a big way as they’ll return to being a full time team, hitting all the races with driver, Ryan Blaney, who said both the driver and team have to get “back used to it.” On getting the keys to the famous Ford #21, Blaney said, “It’s every young racer’s dream, especially me watching my dad at the race track for as long as I can remember. It’s all happened so fast. I’ve said since November, since we announced it, I’m so excited.”

Team Penske was the final Ford team to talk with us and Roger is celebrating 50 years of racing. “I will be at the races as long as I can stand up. We’re here for one reason and that’s to win,” said team owner Roger Penske. With well over 400 wins, including the Daytona and Indy 500s, it’s working. “It’s my day job on the weekends,” said The Captain. A team this good doesn’t happen by accident. Showing remarkable consistency in keeping both personnel and corporate partners, Team Penske probably gets more out of that consistency than any other team.

The last day of the tour was all about the Chevys. Starting off was the Chip Ganassi Racing team. Jamie McMurray, driver of the No. 1 Chevrolet brought up an aspect of the new aero rules, not heard before on the tour, “This will be hard for everyone to process, but I don’t think it’s going to feel that much different. You notice a grip difference where if you unloaded with a lot of grip or 1,000 pounds more downforce and you would go run and then you took it all off, then you’re like ‘hmm, that’s a lot less grip, and it’s noticeable.” McMurray went on to tell the behind the scenes info on the package, “Last year, it was about trying to find a direction. NASCAR had some guys that they had hired to come up with the rules packages. I am on the driver council, and when we sat in those meetings, our group felt like the direction they were heading wasn’t the right direction, but ultimately the only way to know was to try them both out. It seemed from my perspective, when you look at the amount of green-flag passes and the way the racing was, it was definitely better at the lower-downforce tracks. The goal in my mind – what the drivers would like to see – is stay with the lower downforce we have but then continue to take even more off.”

Richard Childress Racing (RCR) is a good example of a long time Chevy team. They’ve been ‘Bowtied’ for an amazing 47 years now. The RCR lineup for 2016 includes seven teams in NASCAR’s top divisions. “We want to win in the Cup Series and we will,” boasted Childress, with every good reason to believe him. He admits the new aero rules will be “challenging” but actually fit the RCR days of old. RCR will also partner with a new combo team. Levine Family Racing joined forces with Circle Sport to participate full-time with drivers Michael McDowell and Ty Dillon. The new team has also entered into a technical alliance with Richard Childress Racing and will run Chevrolet SS cars this season.

The next visit was with Stewart Haas Racing where Smoke took a shot at the media, “It feels really good to know that this will be my last media tour, I can tell you that,” joked Stewart, who will be retiring after 18 years of full-time driving at the end of this season. “I want to go out and have a fun year, but I also want to be racing with these three (Harvick, Patrick and Busch) toward the front every week. I want to contend for a championship.” Stewart’s take on the aero rules were even more hardcore, “It’s not near low enough to where I would really like it, but it’s better than the direction that we knew they were planning on going this time last year. Their thought was increasing downforce, and drivers were losing their minds over it. Luckily, they were able to get on the same page and realize that this is the right direction.”

A few new crew chiefs on the team will call the shots for Stewart and Patrick and she’s pumped. “Every change that’s been made has been good so far,” said Patrick, who was sporting her new Nature’s Bakery firesuit.

Harvick was asked about his first win at Atlanta, taking over the car from the late Dale Earnhardt. “It’s one of the biggest wins of my career, for sure, just because you can’t have your first win twice. Talking about transitioning into Earnhardt’s car, it’s a foggy day to say the least. The only thing I really remember about that day is coming to two laps to go and after the end of the race, was fans hanging on the backstretch fence. I don’t remember Victory Lane. I don’t remember anything, really, about the race weekend on that particular weekend. I know that sounds  strange, but I don’t really remember any of it, because there were so many different emotions during that time period that it was a really, really strange time in just life in general because of the fact of everything that happened.”

The last stop on Chevy Day was with Hendrick Motorsports who are looking to sweep the field this year. “It doesn’t matter what kind of business you’re in, it’s the kind people,” said Rick Hendrick. “We’re looking out of the windshield, not the rearview. We focus on the championships ahead, not the ones behind us.”

Chase Elliot is confident in his abilities to fill the shoes of NASCAR legend Jeff Gordon as he takes on the No. 24 Chevrolet. Elliott believes that under the supervision of crew chief Alan Gustafson, he will excel in NASCAR’s premier series. “No matter where we start, the good, bad, ugly or great, if we can start at that point and progress, we can come out on top,” said Elliot. “We definitely have a winning race team. There are no excuses as long as I do my part to compete with really good runs.”

Jimmie Johnson, who many writers pick as the Champ for this year, talked about the new rules, “The goal with this rules package is to create more tire fall-off and a bigger separation in lap time from Lap 1 to Lap 30. As we build that into the cars, I think you’re going to see comers and goers. Even with last year’s package, we were able to see that at a few tracks that had very abrasive surfaces.

The bottom line is the rules package should create more and better racing as driving the cars will be more in the driver’s hands than recent years. With the bulk of the schedule on intermediate tracks, that’s where the action will be. And with better attendance and TV viewing, this just may be a turnaround year for NASCAR.