As the Chase for the NASCAR Sprint Cup picture comes further into focus, NASCAR has announced that Chase Grid Live Sponsored by Toyota and Sprint will make its debut in downtown Chicago on September 10-11. The free outdoor fan fest located on North Michigan Avenue, will culminate with a two-hour live show featuring all 16 Chase for the NASCAR Sprint Cup drivers, just days before the momentous Challenger Round debuts at Chicagoland Speedway. 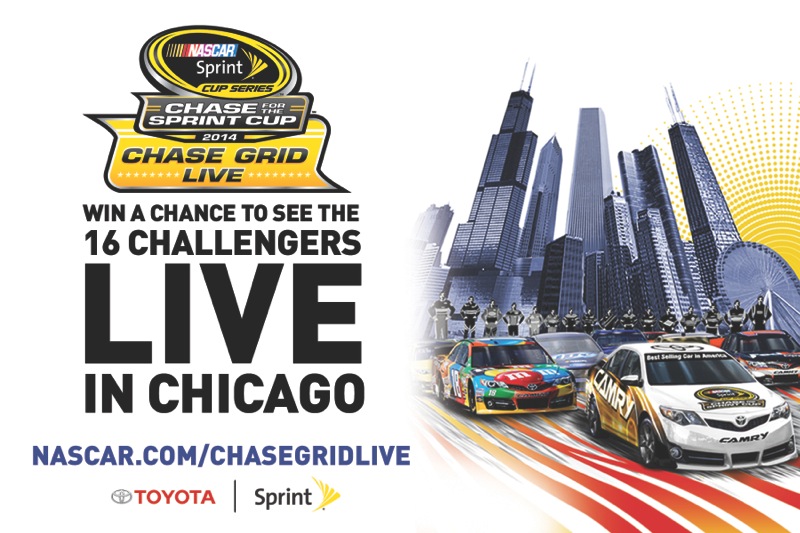 “There’s no better way to introduce our new Chase for the NASCAR Sprint Cup format than by inviting our fans – the most loyal in sports – to be a part of the celebration,” said Steve Phelps, NASCAR chief marketing officer. “We are fortunate to have partnered with two world-class brands in Toyota and Sprint to provide an unforgettable fan experience as we embark on this significant moment for our sport.”

In conjunction with this announcement, fans can visit NASCAR.com/ChaseGridLive to enter the Chase Grid™ Live Sweepstakes. The Grand Prize package includes an all-inclusive trip to Chicago for a VIP experience at Chase Grid Live, two VIP access passes to all three national series races at Chicagoland Speedway, a ride in the Toyota Camry Grand Marshal car before the NASCAR Sprint Cup race, and $1,000 spending money. Fans can enter the Chase Grid Live sweepstakes through August 29.

“Toyota is proud to once again partner with NASCAR and Sprint in Chicago for this annual celebration of the Sprint Cup Series championship contenders,” said Ed Laukes, vice president of marketing, performance and guest experience, Toyota Motor Sales, U.S.A., Inc. “With this season’s new Chase format and 16 worthy competitors vying for the championship trophy, this is an event Chicagoans and NASCAR fans will certainly want to attend. Being from Chicago, I know it’s a great venue and knowing NASCAR it will definitely be a must-see event.”

Throughout the two-day fan fest, ESPN will feature live segments with many of the 16 drivers competing in the Challenger Round and various other NASCAR personalities making appearances on-site. Fans in attendance will be treated to custom content that will be featured on Sprint Vision, a high definition 18 x 32.4 foot screen; Toyota Camry NASCAR Sprint Cup show cars; and a special in-show tribute by NASCAR and Toyota to the nation’s servicemen and women.

For the fourth-consecutive year the Chase for the NASCAR Sprint Cup begins at Chicagoland Speedway. For tickets to the September 12-14 race weekend, visit ChicagolandSpeedway.com or call 1-888-629-RACE (7223). Single-day tickets are available.

The first race in the Chase for the NASCAR Sprint Cup from Chicagoland Speedway will air live on ESPN at 2 p.m. ET on Sunday, September 14. The race will also be broadcast on the WatchESPN app, MRN and SiriusXM NASCAR Radio, with additional coverage on NASCAR.com.