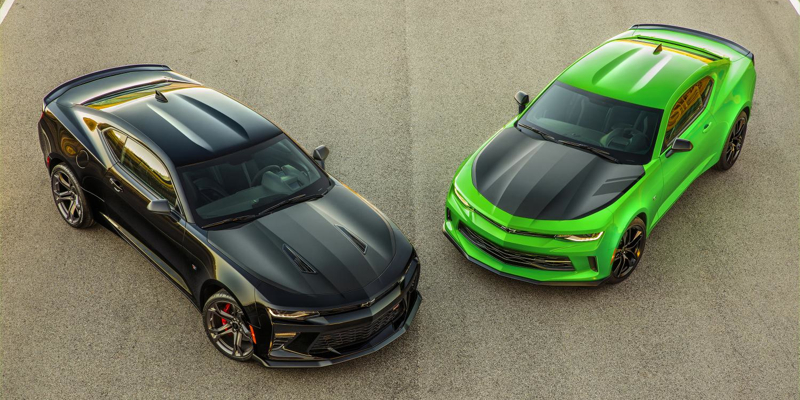 The Chevrolet Camaro 1LE performance package returns for 2017, poised to set new benchmarks for attainable track performance. The package builds off the success of the previous generation 1LE, offering increased handling and track performance. In response to customer demand, Chevrolet will offer two distinct 1LE packages, for both V6 and V8 models, each visually distinguished with a satin black hood, specific wheels and more.

For the first time, the 1LE package will be available on Camaro 1LT or 2LT coupes equipped with the 3.6L V6. Featuring more aggressive suspension tuning, standard Brembo brakes and Goodyear Eagle F1 tires, the LT 1LE delivers an estimated 0.97G in cornering grip. Available Recaro seats will keep you planted through the corners, and an available Performance Data Recorder will allow you to view and share your track experience.

As a result, the 1LE package elevates the award-winning performance that earned Camaro the 2016 Motor Trend Car of the Year and Car and Driver 10Best awards.

The new 1LE packages are available in late 2016, on 2017 Camaro SS and LT V-6 coupes equipped with manual transmissions. Pricing and performance data will be announced at a later date.

Camaro LT 1LE
The Camaro LT 1LE was developed to be the most track-capable sports coupe in its price class. Highlights include:

“With a curb weight under 3,500 pounds, excellent front-to-rear weight balance and the precision of the FE3 suspension, the Camaro LT 1LE offers unmatched capability in its class,” said Oppenheiser. “As a result, it offers incredible performance for Camaro V-6 customers.”

FAST FACT: The 1LE package was developed in 1988 to make the Camaro more competitive in Showroom Stock road racing series and officially debuted in 1989. Four examples were reportedly built in 1988; with 111 built in 1989. The 1LE package was also featured on fourth-gen vehicles through the 1999 model year, returning to the fifth-gen Camaro in 2013.