Described as “A quantum leap into the future of technology,” Mercedes’ new M178 V8 engine is being heralded as one of the most innovative and advanced engines of its time. 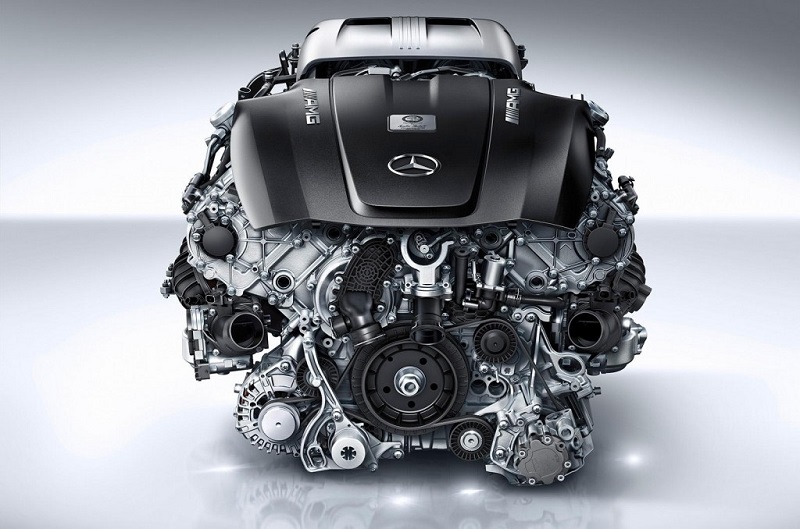 The new M178 engine will be placed in Mercedes’ new flagship AMG model, the AMG GT, which will be replacing the SLS AMG upon its arrival in 2016. The M178 is a 4.0 liter V8, which produces around 503 horsepower at 6,250 rpm. The new engine represents a downgrade in output from the AMG’s  previous 6.2 liter, naturally aspirated V8, which produced around 631 horsepower. However, this may not necessarily mean worse performance, as the AMG GT will be far more technologically advanced, lighter, and more efficient than the outgoing SLS AMG. Also, we can expect that the engineers at AMG will have their way with tuning the new M178, and we’ll probably see it top 600 horsepower, so fear not.

Among the most heralded features of the new engine are its compact design, its low power to weight ratio, and its groundbreaking fuel efficiency. This should come as no surprise, however, as there has been increased collaboration between the Mercedes Formula 1 engine supplier and the Mercedes production car arm of the company. The engine gains stability under pressure by virtue of a newly improved rigid crankcase and forged pistons. Friction is minimized as much as possible by a special nano-slide coating which coats the cylinder walls. The cylinder heads employ a zirconium alloy to give them maximum thermal conductivity ratings.

Lateral acceleration is maximized by bringing the engine’s center of gravity closer to the roadway; the engine’s setup in the new 4.0 liter has been lowered by 55 mm compared to previous AMG setups. Contributing to this is a power dry sump lubrication system, which eliminates the need for a front mid-engine oil pan. The new 4.0 liter also features an ultra-compact design. In the twin turbocharged setup, both of the turbos, built by Borg Warner, are situated within the V8 engine block. Fresh air is routed to the exhaust turbos at lower engine output, in order to the increase performance and avoid turbo lag. Direct injection is also employed, in true AMG fashion.

Mercedes’ new AMG GT is designed to court a new generation of buyers. With his aim comes the responsibility of bringing the AMG line to the forefront of technology. The engine design team has done its work on the new M178, Now it’s up to the rest of the Mercedes team to make sure that the remaining elements of the AMG GT wear the badge proudly.