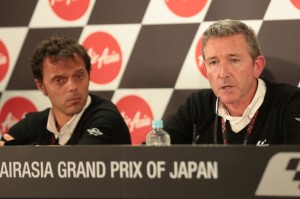 Friday’s practice sessions for the Japanese MotoGP have been cancelled, and a “highly flexible” revised schedule has been announced that will fit several different scenarios for Saturday and Sunday.

Wet and foggy conditions severely reduced visibility at the remote Motegi circuit, preventing the medical helicopter from flying to the track, under Japanese law.

“Without a medical helicopter on site for evacuation and no viable alternative we’re not prepared to run, when there is a risk that a seriously injured rider may not be adequately treated,” explained Race Director Mike Webb in a special media briefing at the circuit (pictured).

“The helicopter has been trying to get permission to fly to the circuit since Thursday. It’s been on stand-by all the time. Our advice was that as soon as permission was granted, the helicopter could be here in ten minutes, so we waited until the last possible moment before cancelling practice.

“As far as alternatives, the big problem is location. Motegi is more than one hour by road to the accredited hospital. We have been advised that this is not safe in the case of a seriously injured rider. Many, many alternatives were proposed and looked into – such as part-way by ambulance, then by air, closer medical centres. No reasonable solution was found.

“The weather forecast for Saturday is brighter, but if the helicopter still cannot fly by tomorrow afternoon then it will be dismantled and shipped to the circuit by road and reassembled ready for Sunday. The problem is not the rain, it is the visibility.”

Officials say that if they are able to run tomorrow [Saturday] morning, they will run free practice for as long as possible and then move on to a normal Saturday afternoon qualifying schedule and a normal Sunday schedule. However, the most likely scenario should racing not be able to resume tomorrow morning, Saturday afternoon will be deemed free practice and will be run as long as possible. Then a heavily revised schedule for Sunday will be run to accommodate practice, qualifying and the race.

Series officials say they are committed to running the Japanese Grand Prix and will do everything we can to make it happen.