A major new novel has brought into sharp focus the involvement of the Nazis with the Silver Arrows grand prix cars in the run-up to the Second World War.

Motorsport writer Mike Breslin’s meticulously-researched new book, Pieces of Silver, harks back to a time when the cars of Auto Union and Mercedes, the Silver Arrows – as the F1 Mercedes of Lewis Hamilton is known to this day – were heavily-supported by Germany’s Nazi government.

Breslin, whose last novel earned him the plaudit “Could establish Breslin as motorsport’s answer to Dick Francis” (Motorsport News), has turned a lifelong interest in one of the sport’s most dramatic eras into a gripping, action-packed story of racing and war, love and betrayal. 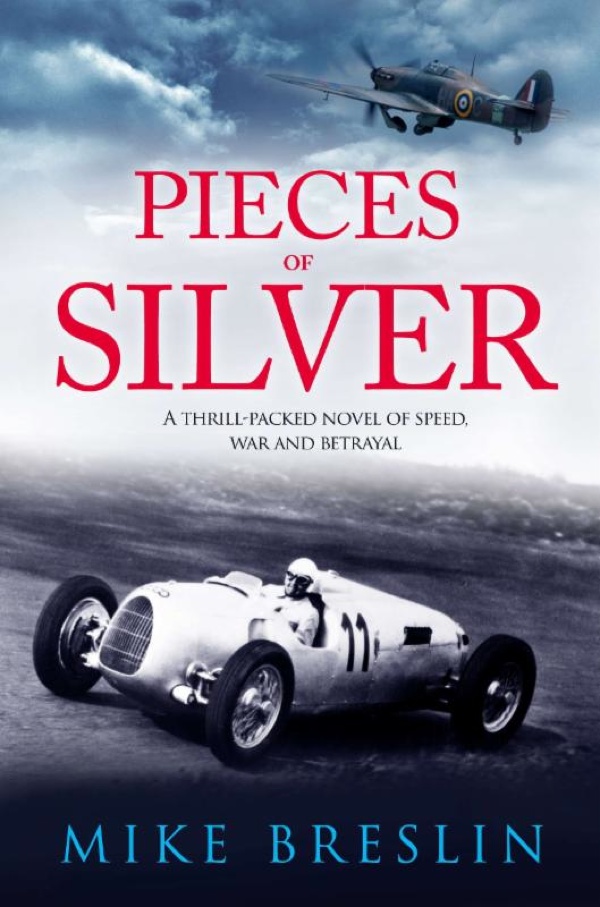 The book follows the fortunes of a fictional British driver in a German team, through some of the most dramatic, spectacular and horrific true events of the 1930s and the Second World War.

Explaining the motivation behind writing Pieces of Silver, Breslin says: “I’ve always been fascinated by this particular period in the history of grand prix racing. It’s not just the 600bhp cars and the colourful characters that raced them, but the dark politics of the time, too.”

One particular story from this spectacular time especially interested Breslin: “For many years I’ve been intrigued by the story of Richard Seaman, the English driver who drove for Mercedes in the 1930s. He was killed in a crash at Spa in 1939, just a few months before the war started. I have always wondered how his war might have turned out, what with the deals he had struck and the friends he had made. With that ‘what if’, this book was born.”

Mike Breslin is a former Formula Ford racer who works as a freelance writer. He has published two other books: The Unfair Advantage (fiction, 2000) and The Track Day Manual (non-fiction, 2008). Breslin is originally from south Wales, but is now based in London. For more on Mike Breslin, please go to www.bresmedia.co.uk.

A blurb from the back of the book reads:
For the Nazis, conquering the race track was just the beginning.

English racing driver Westbury Holt sees the Auto Union grand prix cars as nothing more than his chance to be the fastest. To him, the Nazi involvement is just politics, nothing to do with sport and speed. But others see the access West has to superior German technology through his links with the racing team as an opportunity. He is soon drawn into a web of intrigue that is as dangerous and unpredictable as the 520bhp racing car he drives.

With the coming of World War II, the boundary between right and wrong becomes blurred, and friends become enemies. But will West, now at the controls of an RAF Hurricane, find that the past is the most dangerous foe of them all?

From the race tracks and the record runs of pre-war Europe, to the bullet-laced skies of Crete and the frozen killing fields of Russia, Pieces of Silver is a 200mph journey through a world of speed, love, war and betrayal.

“This is a pacey work of fiction, which combines grand prix racing with a plot which features more twists than a hot lap around Monaco… Could establish Breslin as motorsport’s answer to Dick Francis.” Motorsport News

“A good novel in estimation needs to pull the reader into a fascinating scene, illuminate interesting human characteristics in a new way and be full of interesting characters. A good novel involving racing needs to avoid the usual simplifications for the unknowledgeable. Mike Breslin’s The Unfair Advantage qualifies.

“F1 racing in this novel is intense, fast-paced, fascinating and the inside views as teammates struggle with the conflicting needs of themselves and the team, time-proven human characteristics of ambition, greed, love, veniality and generosity are all on display. The lead character, Eoghan Kinsella is developed enough to warrant a dinner invitation… The in-cockpit racing scenes are realistic and compelling.” Victory Lane (USA).