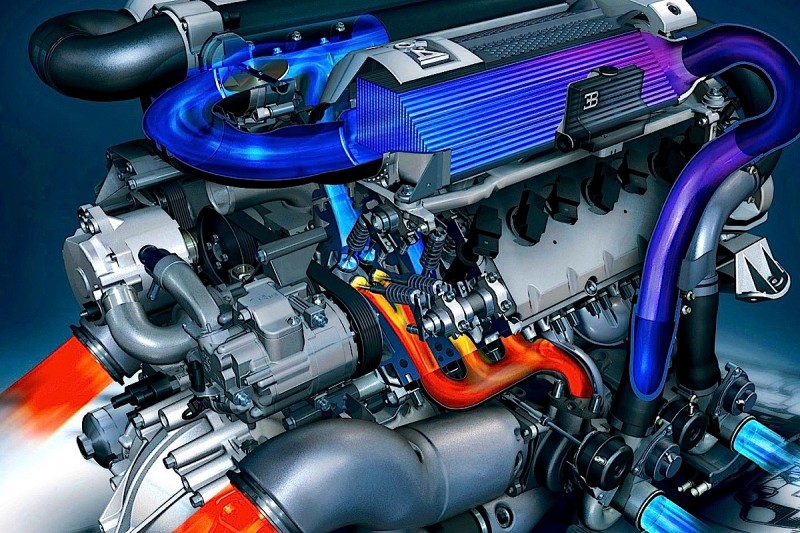 From top to bottom, the Bugatti Veyron is a marvelous feat of engineering, and it only stands to reason that a truly extraordinary  power-train would be at the center of it all. The engine in question is the 8.0 liter W-16 engine purpose-built by the Volkswagen Gorup for use in the Veyron. According to recent reports, the current engine, producing over 1,200 horsepower, will remain the power-train of choice for the next generation of Bugatti supercars, with a few upgrades being added along the way.

The 8.0 liter W16 engine is formed by mating two separate 15 degree V8 engines together at a combined 90 degree angle; the two adjoining banks share a valve-train, allowing for the engine to get away with only four cam-shafts driving 64 total valves. With two turbochargers driving each narrow angle V8, for a total of four, the engine produces a wicked 1,200 peak horsepower at around 6,000 rpm and 922 ft lbs of peak torque between 2,200 and 5,000 rpm. Redlining at around 6,600 rpm, the engine propels the car to a top speed of well over 260 mph, though its 0-6- acceleration time of 2.5 seconds flat is perhaps more impressive.

Despite all of its advancements, the engine, developed in the mid-2000s, was beginning to show it s age right around the time the last of the 450 Veyrons left the assembly line earlier this year. For this reason, Bugatti parent Volkswagen has announced that the Veyron’s successor, the Chiron, due to arrive this next year, will  employ a host of engine improvements over its predecessor. Perhaps the most notable is the introduction of an electrically driven turbocharging system. The current engine made use of a larger number of smaller turbos for a better low-end throttle response, and the advent of electrically driven turbos will make this issue even less so. Inspired by Formula 1, this design will use an electric motor to drive at least two of the turbos at lower rpm, until engine output is sufficient to drive the them by exhaust gases; instead of waiting for the exhaust gases to reach a suitable level, power is available almost instantaneously.

Also available for the next generation of Bugatti engines is direct fuel injection, which will constitute an improvement over the current system of port injection. A host of VW technologies, including their advanced Multi-Point Fuel Injection system, as well as their piezoelectric fuel injector design which uses crystalline expansion induced by applied electric currents to alter injection size, could be employed on the new engine.

As a sign of the times, it appears as though VW is also interested in improving the future Bugatti’s fuel economy. The current EPA ratings declare around 8 mpg for city driving and 14 mpg for highway driving. The new engine design will be enabled with cylinder deactivation with hopes to achieve around 14 mpg in the city.

Bugatti claims that the engine redesign will be enough to power the upcoming Chiron to a remarkable 288 mph, along with a new power output of 1,500 horsepower and a new torque figure of around 1,100 ft lbs of torque with help from an added hybrid setup. With a price-tag of probably around 2 millions dollars, the Chiron will be forbidden fruit for most of us. That said, if you’re a bit disappointed about the prospect of never owning a Bugatti, check out Engineering Explained’s “3 Reasons Why The Bugatti Veyron Is Inferior To The Toyota Prius.“