Three-time NHRA Top Fuel world champion Larry Dixon has been suspended indefinitely from NHRA Mello Yello Drag Racing Series and Lucas Oil Series competition. The decision, according to the statement, centers on an unapproved two-seat Top Fuel dragster that Dixon revealed at the SEMA Show in Las Vegas last week. Promotional video and imagery depict the unique “NitroX2” dragster running only at the Palm Beach International Raceway, an IHRA-sanctioned facility, suggesting there’s more to this story than meets the eye. 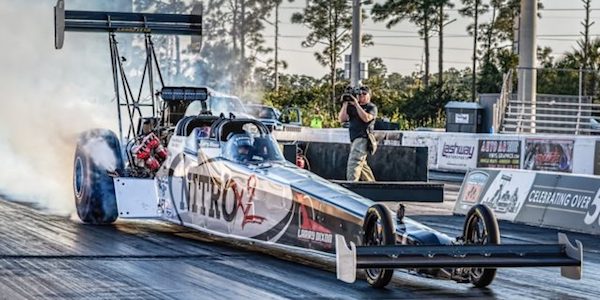 The NHRA imposed an indefinite suspension of competition privileges against Larry Dixon for violating NHRA Rules, particularly Section 1.3.1 Participant Conduct and 1.6.3 Chassis Inspection of the 2017 NHRA Rulebook. NHRA Tech Department discovered the use of a NHRA chassis tag on an unauthorized and unapproved two-seat dragster. Any further incidents could result in further action. Larry can appeal the decision, per the 2017 NHRA Rulebook.

The NHRA confirmed to Dragzine that an expired tag was affixed to the chassis, and although expired, it implied NHRA approval, which was not previously granted. Chassis builder Murf McKinney confirmed that the chassis began life as a Hadman piece and was modified at his shop to add the second cockpit. Multiple sources, including Competition Plus’ Bobby Bennett, have also reported that the dragster was run at an NHRA-sanctioned facility without certification or approval.

While seeking sponsorship for his own Top Fuel team, Dixon has been competing in the latter half of the 2017 season behind the wheel of the Bartone Brothers Top Alcohol Funny Car on the Lucas Oil trail. Dixon drew the ire of the sanctioning body earlier this season in his Top Fuel appearance at the Gatornationals, when he was ordered to cover decals on his dragster advertising the annual World Series of Drag Racing, an IHRA-owned property.