Born to Earl and Rose Hayden in what would be his lifelong hometown of Owensboro, Kentucky, on July 30, 1981, Hayden was the middle sibling to Tommy, Jenny, Roger and Kathleen. The family was a fixture on the amateur flat track scene, and the brothers eventually also took up club road racing in the early ’90s, racing Honda RS125s with support and guidance from Moto Liberty. One year after turning pro, Nicky signed with American Honda in 1999 to race multiple AMA classes for Kevin Erion’s Erion Racing satellite squad. By the end of a season-long title battle with Tommy, “The Kentucky Kid” earned the AMA Supersport crown, was named AMA Flat Track Rookie of the Year, and was promoted to Honda’s factory effort to begin campaigning the premier AMA Superbike division. 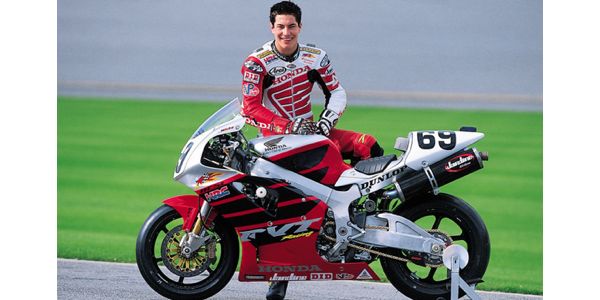 In 2002, Nicky took the Daytona 200 victory on his way to becoming the youngest-ever AMA Superbike Champion. The same year, he rode privateer Honda machinery in a part-time effort in the AMA Grand National Championship series, making history when he, Tommy, and Roger finished 1-2-3 at the Springfield TT, becoming the only brothers in AMA Pro history to sweep a professional podium.

HRC signed Nicky to the factory Repsol Honda MotoGP squad for 2003, and the 2005 season saw him score an emotional debut victory at Laguna Seca, his home round. The following season, Hayden picked up a victory at Assen and repeated at Laguna Seca before securing the World Championship at the dramatic finale in Valencia, Spain. Nicky stayed with Repsol Honda for two more seasons and then switched to the factory Ducati team, where he rode for a total of five years before returning to Honda in 2014, this time with the Aspar satellite squad aboard “open”-specification machinery. Last year, Nicky transferred to the World Superbike series with the Ten Kate-run Red Bull Honda team, for whom he won a race in Malaysia and also contested the first five rounds of this season.

Throughout it all, Nicky has remained extremely close to his family. His signature No. 69 was actually on loan from his father Earl, and his parents and siblings could regularly be spotted at his events. One year ago, he was engaged to longtime girlfriend Jacqueline Marin.

Nicky has been a beloved part of the American Honda family since his early AMA days. This loss is truly the loss of one of Honda’s own, and will be felt forever.

Thoughts are with Nicky’s family, friends, team, competitors, and many, many fans during this difficult time.