Just like opening night, the team at Irwindale Speedway intend to blow the hinges off Fan Appreciation Night and aim to carry out a memorable last race.  Along with an array of cool and colorful fireworks, the event staff will also be handing out loads of cool prizes including a 2014 season pass to two lucky contestants! How cool!

… And of course, the on-track stars of the night, the drivers and their crews, will all be there to see season championships settled and hard work rewarded. 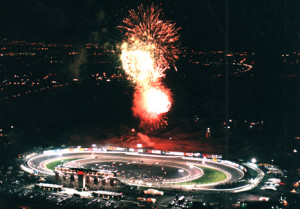 Here is the lineup for the final NASCAR event of the 2013 Whelen All-American Home Track season at Irwindale Speedway:

Super Late Models:Twenty point over seven races, twenty points over hundreds of laps of some of the most competitive racing seen in years at Irwindale, twenty points is all the cushion that points leader and San Fernando’s favorite son Rip Michels, Irwindale’s winningest- driver ever, has over his nemesis from Highland, California, Toni McCray as they both head for their final race of the 2013 season here in the heart of the San Gabriel Valley.

Progressive Painting Race Trucks:  OK twenty points (above) is a narrow lead … well, how about two (2!).  That’s the difference between first and second place here and here’s the real kicker:  neither of the first two racers in the PPRT division has won a race yet this year!  In fact, one needs to drill all the way down to fourth place to find a race winner in the top five.Darren Cheek (Redlands) has the lead after seven races with 286 points and Monrovia’s Todd Cameron is the guy only 2 clicks back at 284.

Superior Automotive Engineering Super Stocks:  Ok, here’s another one first place coming in: 278 points, second place: 276 points and third place only 10 behind at 268.  Gary Read from LaVerne is the man with the most heading in with Long Beach’s Zack Green two down.  Covina’s Greg Crutcher has the 278.  This is race seven of the series and there a whole bunch of drivers (check them all out on the track’s website www.irwindaleeventcenter.com) who are within range if you add 50 to their points totals.  For the record twenty-one drivers competed in the SAESS’s this year.

INEX Legends Cars: Darren Amidon (Alpine) has a good year going in the Legends, but he’s still not out of the woods even with a “huge” (for these days) of 34 points over Alta Loma’s Brent Scheidmantle (236 to 202).  Aaron Wells from Studio City is hanging in nicely with 194 in the six-race 2013 series for the identically-speced mini race cars.The Legends Cars saw thirty different drivers compete at Irwindale in 2013.

INEX Bandoleros:  Another gigantic points lead!  Twenty-eight this time!  Rickey Lewis from Oxnard has the lead in the Bandos, but … there are two races over the November weekend, the youngsters will race on Friday and Saturday night (that’s 100 smoking points up for grabs).  So, Lewis’ 392 and La Mirada’s Ryan Vargas’ 364 are potentially much bigger numbers. Sixteen different racers took part in the Bando division this year.

Pick Your Part Southwest Tour Trucks Series:  Neil Conrad (with 565 points in his bank account) leads the Southwest Tour series back into Irwindale with an (almost) nice 46-point lead over Mike Gilboy (519) with Ed Cutler hanging in there in third with 509.  These pickemup drivers run at short tracks up and down the west coast in trucks that are tech-identical right down to the lug nuts.


The Irwindale fan gates open at 5PM and the final On-Track Autograph Session for the 2013 season will start right on time at 5:45PM.  All the cars, all the drivers and their crews will be out on the track … ready to sign event programs and pose for pictures.

Fans can directly secure their discount tickets online at:  www.irwindaleeventcenter.com.