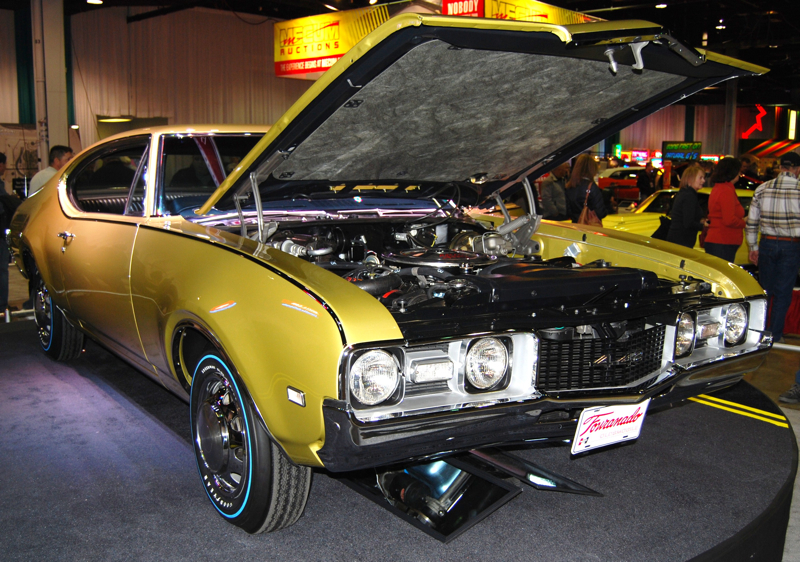 The one-of-a-kind Oldsmobile Fournado is heading for the Carlisle GM Nationals. Never heard of the Fournado? Then you probably missed the March 1968 issue of Super Stock & Drag Illustrated, which blurbed this car on its cover. “455-INCH FWD OLDS 442,” it said. The story inside told readers about an unusual Oldsmobile that had been built by Hurst Performance Research. According to the magazine, the Fournado was built as a plaything for George Hurst, who owned the company.

“This time Uncle George wanted his own toy, a fast, sure-footed road car,” said the story. “And (he) specified an Olds 442 with front-wheel drive.” Hurst had pull and the car got the Toronado’s 455-cid V8 instead of the 442’s 400-cid job. It also had the Forced-Air induction system. The 442 was about 1000 lbs. lighter than a Toronado, so the 55 extra cubic inches had a big affect on the car’s performance. That was despite the fact that the 455 engine’s exhaust manifolds couldn’t be used because of the smaller body. That held the maximum horsepower to a mere 390, which was more than enough to make the car fast.

A torsion bar suspension aided its sure-footedness. Modifications had to be carried out to fit the Toronado driveline and sub frame into the 442: Hurst sectioned the front fenders, moved the wheel openings toward the front and relocated the radiator further forward. The Toronado frame and 442 frame where joined together about halfway down the car’s wheelbase. Hurst ditched the transmission hump. At the rear was a beam axle sitting on the stock 442 coil-spring-and-trailing-arm suspension. The car had Goodyear Blue Streak tires and was finished in special Hurst Gold paint.

Although the Fournado retained much of the look of a stock 442, it had a 2-1/2-inch longer wheelbase with the front wheels moved forward. It also wore Toronado wheel covers. With the heavier engine, the weight distribution—on paper at least—was improved over both the 442 and the Toronado. A man named David Landrith, who worked for Hurst in Detroit, took ownership of the Fournado project. He created the car on a frame that was mostly Toronado ahead of the rear wheels. The rest of the frame came from a 442.

There were some teething problems with the car’s chassis and brakes, but the engineers and designers at Hurst Performance Research took care of them. “The new Four Four Toronado (another nickname for the car) is superior to either a Toronado or a 442,” concluded the story. “More performance, more traction, improved cornering, better handling, added maneuverability, everything.”

Fred Mandrick, who owns the car today, brought it to the Muscle Car and Corvette Nationals (www.MCACN.com) in 2013. He believes Oldsmobile kept ownership and let Hurst drive it for around 2-1/2 years. In 1970, the Fournado was shipped to Guy Martin Oldsmobile in Woodland Hills, Calif. The dealership put the car on the cover of its April 1970 newsletter, calling it the “Baby Toronado” and using it to promote Guy Martin as the dealer with a difference.

On Sept. 10, 1970, the car was sold to a man named William Hesse of Chatsworth, Calif. The used car warranty given to Hesse showed the license plate number 2LG696 and said that the Fournado had 39,000 miles on the clock. An invoice says that he paid $4,575 for the car and got a trade in allowance of $350 on a 1962 Chevy. He also made a down payment of $800. Hesse used the car as an everyday driver for about 16 years. He took very good care of it and kept it garaged. He lived in several states before moving to Oklahoma in 1976. When he stopped using it, the car had 116,000 miles on it.

Eventually, the car wound up being pictured in a book co-authored by Mark Fletcher, who lived in Stevens Point, Wis. Fletcher had teamed up with writer Richard Truesdell to author the book called Hurst Equipped: More than 50 Years of High Performance. Fred Mandrick bought a signed copy of the Hurst book at the 2012 MCACN show and saw the picture of the Fournado inside. He asked Fletcher what the owner planned to do with the unusual Olds. The answer was that the car’s owner wanted to sell it to the kind of person who would take good care of it in the same way he had.

Fred asked Mark Fletcher how to reach the car’s owner. Mandrick called the owner from the car show’s host hotel in Rosemont, Ill. He must have convinced the man that he would be the perfect owner. He wound up getting the car along with every piece of paperwork related to it including the documents previously mentioned, temporary registrations, original black California plates and two of Guy Martin Oldsmobile’s newsletters. Mandrick spent most of the next year restoring the car and brought it to the 2013 MCACN show.