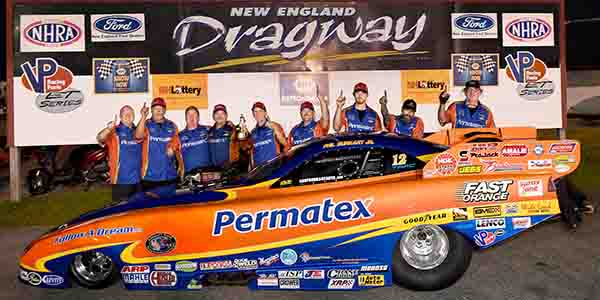 The Permatex/Follow A Dream Race Team collected a pair of back-to-back wins during the 2017 season, capturing the NHRA Division 1 (Northeast Division) regional events at the team’s hometown track, New England Dragway, on Sunday, July 22, 2017 and at Atco Raceway in Atco, NJ on Saturday, August 5, 2017.

Team owner and crew chief, Jay Blake spoke on the successful season, stating, ”I was really proud of my team throughout the year. They never gave up. They worked through the difficult times and they earned us our best national points finish ever. Plus, winning at the New England Dragway was an amazing moment because it is the track where I went to as a kid and first experienced drag racing. It was great to win there, surrounded by our family and friends.”

The 2017 season was the second year that the Permatex/Follow A Dream Team car was helmed by driver Phil Burkhart and tuned by Anthony Terenzio.