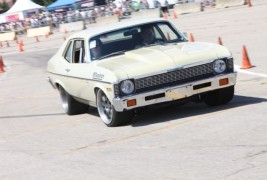 It seemed like just yesterday that we introduced our ’68 Chevy Nova to the world. The intent was to build an all-around street/strip/track car that could do double-duty as daily transportation if needed. To this point, Project Nova has spanned four years and 26 stories, not including numerous updates, blogs, Facebook posts, tweets, and YouTube videos. Choosing a Nova was a good news/bad news deal; being a second-gen X-body, it shared many mechanical details with other GMs, including Camaros, Firebirds, Venturas, Apollos, Omegas, and even Cadillacs. Nevertheless, its ubiquitous nature had some readers crying “sellout!” because we hadn’t chosen something more offbeat. (Those folks will undoubtedly be happy with our next foray, a ’68 Plymouth Valiant.)

This month, we’d like to recount the high points of our Nova buildup since its inception, and talk about some of the stuff we’ve done recently to ready it for the street. And while we’re cautious about saying the car is truly “done,” we can finally say there are no obstacles that would keep us from hitting the highway and living the hot rodding life. It was only last month that this author’s editorial admonished those who are all talk and no game, and now we’re about to put our money where our mouth is and make a five-day 800-mile road trip to Phoenix where we’re meeting some PHR readers to shoot their cars.

When we spotted our Nova on Craigslist in October of 2009, it looked cherry—at least on the screen. It boasted lots of cool stuff we thought we were going to use, like a rebuilt 350,

a rebuilt Turbo 400, new gauges, Flowmaster exhaust, and headers. They were asking $6K and we paid $5K. Sounds like a good deal, but as we soon found out, it was way too much. Complete list of things we kept: The radiator and the black plates.Of note is the fact that Outlaw Motorsports in Riverside, California, has helped us finish up many last-minute details, like installing the remaining interior pieces provided by Classic Industries, and swapping out our Turbo 400 for a PerformaBuilt 700-R4 overdrive (one of the tips from this month’s “The 11 Best Mods For Any Car.” See p. 42.) We also did some tweaking to the carb, swapping out our largish Holley 850 Street HP for one of Holley’s sexy new 750-cfm Ultra Double Pumpers in

Hard Core Gray (PN 0-76750HB). The 850 made great power, but was a tad balky on the street at low rpm, so in went the smaller 750, which produces more vacuum signal for better driving, but at a slight loss of top end power. A good trade we think.

Beyond that, Outlaw chased down some embarrassing leaks we developed, and replaced an oil pan gasket, valve cover gaskets, rear main seal, trans cooler, and trans dipstick tube. Our driving routine gradually increased, leading up to a week’s worth of daily commuting (that’s 120 miles and 3.5 hours per day here in L.A.) with no subsequent problems found. In bumper-to-bumper traffic, we experienced no overheating (the radiator was the only thing we didn’t replace on the car), and even in rush hour we got around 12.5 mpg. Not terrible for a 523hp 400ci small-block. We fully expect our Phoenix road trip to hit 14 mp

Moving forward, we want to hit some autocross events (Del Mar Goodguys looks good for this), and the dragstrip—when and if one reopens in Southern California. Las Vegas, however, is looking better for a drag outing. (We’ll wait a moment while you digest the idea that it’s our job to spend the boss’s money to drive to Las Vegas and go drag racing.)g if we can nurse it through the desert with no issues.

With a cracked block, the 350 in the Nova turned out to be crap, but we already had built one of Dart’s SHP 400 small-block crate motors, so it got the nod to go in. As our starting point, we had upgraded to the forged crank and forged Mahle pistons, which would give it a 10.66:1 compression ratio.