While watching the Gatornationals recently on TV, I was amazed and pleased with ESPN’s new format. Showing the first two rounds back-to-back was great. 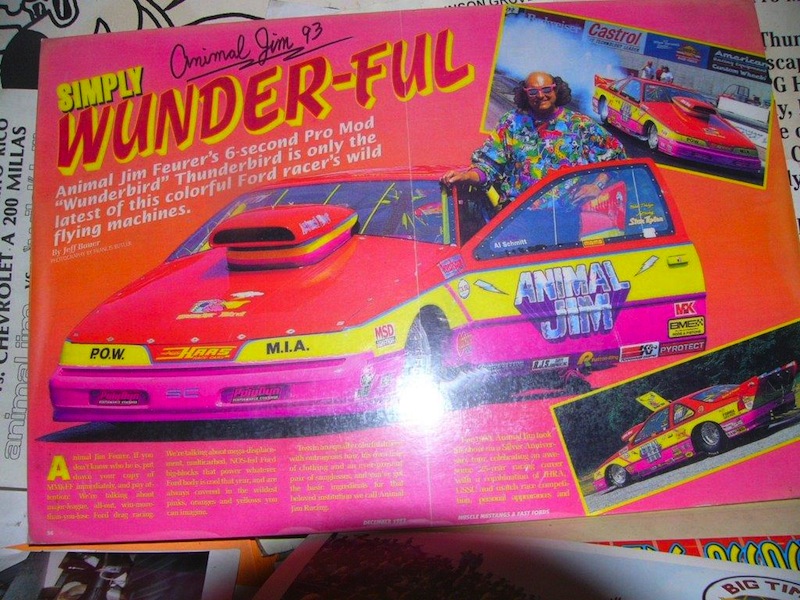 It seemed that carnage was at a minimum this year at the Gatornationals, but perhaps more sensible tune-ups, which have been firmly suggested by NHRA, were partly responsible. I admire, respect  and understand what the Nitro racers do. I will run to the fence to see Funny Cars, but seeing all that beautiful equipment in Top Fuel and Funny Car constantly being destroyed, even though it is entertaining, leaves me with a slight tinge of guilt.

I have been asked over the years why I did not evolve into Funny Car racing. I was even asked by Funny Car racers. They would tell me I was misplaced and should be in a Funny Car. It probably would have been a natural. A giant “Animal Jim” emblazoned on the side of a flamed orange Mustang flopper.

The reasons above are partly why I never ran Funny Car. I was not interested in continually massacring beautiful equipment. Another reason was I could not afford it. Also, I did not have the personnel to help me run a Funny Car program. Like me, my crew were door slammer folks down to their toes.

Keeping a door car going was tough enough, especially when we evolved from Pro Stock to Pro Modified. In 1987, the formative outlaw slammer days before Pro Mod, I went from 1,200 hp with my  700 inch Boss Hemi engine to 1,800 hp after installing a NOS fogger system, which subsequently involved a higher level of maintenance and prep. Instead of wearing out flow benches and brains trying to find more horsepower for Pro Stock, the primary agenda was to create a balance of that unlimited power we had in those days and still make the engine survive to an acceptable level.

In the early N2O days, I witnessed peers hurting an engine almost every run just to ring up the numbers. Not my style, I could not afford that. If I was hurting engines that often I would’ve run a Nitro Funny Car.

The goal with running N2O with my 700 inch engines was to try and go the distance. With a file drawer full of exhibition contracts, being reliable was paramount. The learning curve to make the change: stronger piston skirts and thicker roofs, heavier wrist pins, I lowered the ring package, raised oil ring pressure, employed tool steel top rings, more ring end gap.

With nitrous I changed out my aluminum rods at 40 runs instead of 50, checked leak down and cranking compression frequently, checked bearings about every 15 runs. Freshened the engine complete during every rod change. I usually had two engines and would switch while one was down. With all the defensive changes, the tune up was a big key, to run well and survive. I learned much more as we evolved to Pro Modified.