Porsche Cars North America (PCNA) and Mazda Raceway Laguna Seca announced that the next Porsche Rennsport Reunion will again take place at the famed California racetrack the weekend of October 9-11, 2015.

Hosted by PCNA, Rennsport Reunion V will, once again, bring together an extraordinary gathering of significant Porsche vintage and current racecars, as well those who have designed, engineered, and driven them to victory in the world’s most famous sports car races. The three-day program of on-track competition will be complemented by a Concours d’Elegance, which is open to invited race participants, and special activities celebrating each of the six decades of legendary Porsche racecars.

This incomparable event has been held about every three years. After staging the first three rounds in the East, with the inaugural at Lime Rock Park in 2001, Rennsport Reunion IV moved west in 2011, tapping into a vast array of west coast car aficionados and Porsche enthusiasts.

“While the Rennsport name from the beginning has become a staple fixture for international collectors and racers, choosing the Monterey Peninsula opened up this one-of-a-kind gathering to the many Porsche fans in California and beyond who were previously unable to attend,” said Detlev von Platen, President and Chief Executive Officer of Porsche Cars North America. “Approximately 40,000 spectators for the weekend, and a record number of race cars and participants, proved that our decision to come here was correct.” 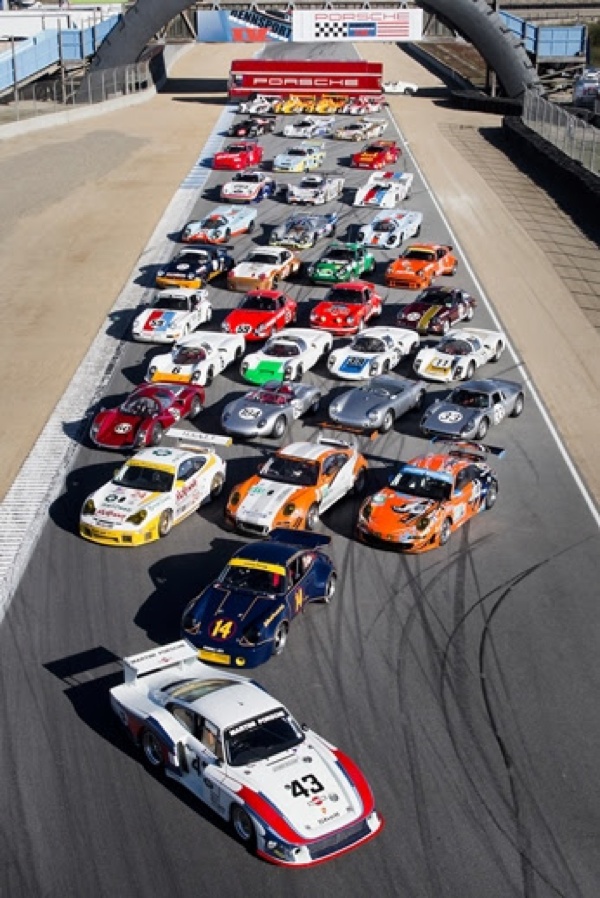 “After that truly rare gathering of significant Porsche racecars on the West Coast in 2011, we can expect an even larger number of fans of the Stuttgart sports car icon to attend next year,” predicted Gill Campbell, CEO and general manager of Mazda Raceway Laguna Seca. “We are proud that Porsche will come back to our track where it has a long racing tradition, and my team and I look forward to help making this the best Rennsport Reunion ever.”

Porsche Rennsport Reunion V will assemble a wide variety of Porsche’s most historic racing models from the nimble mid-engine 550 Spyder of the mid-’50s, through the mighty 917 and 956/962 of the ’70s and ’80s, to the highly successful 911 GT3 RSR and RS Spyder of the last decade. Special tribute will be paid to the car that embodies Porsche’s return to the top of sports car racing. The 919 LMP1 Prototype is the guarantee that Porsche motorsports – and Rennsport Reunion – have a successful future.

During Porsche Rennsport Reunion IV, approximately 1,300 Porsche Club of America (PCA) member-owned Porsche models from the past 66 years helped fill the show fields, race classes, and parking lots of Mazda Raceway Laguna Seca. For the upcoming fifth rendition, the PCA, celebrating its 60th year in 2015, will once again play an integral role, capping their year-long celebration.

Ticket information is available by contacting 800-327-7322 or online at www.mazdaraceway.com.